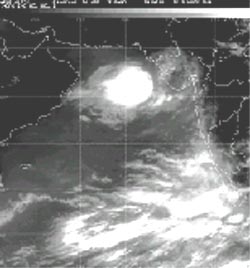 the threat of another super cyclone hitting the Gujarat coast remained just that -- a threat. But the petering out of the cyclone helped shatter a few myths this time that our bureaucrats have built up that droughts always result from bad monsoons. The cyclone also led to, for only the third time in 50 years, an early but normal monsoon. Director general of the Indian Meteorological Department, RRKelkar said, "The drought this year has nothing to do with a weak monsoon. We have a normal monsoon for the 13th consecutive year."

On May 23, the imd announced the formation of another severe depression, observed by the satellite Insat ib over the Arabian Sea. The possibility of a super cyclone loomed large over Gujrat and Rajasthan. The storm positioned in the south-south west, some 500 km from Veraval in Saurashtra, with a circulating speed of 80-100 km and a radius of 200 metre (m) and a height of 12 m threatened to wreak havoc. State governments evacuated villages. For the next three days imd tracked the vortex of the cyclone over the Arabian Sea. The cyclone behaved like a truant child and moved unpredictably. Within three days it had shifted towards southern Pakistan and turned into a whimper of its earlier self. The vortex of the cyclone separated from the main mass of clouds and the threat dissipated.

Indian monsoon has always been difficult to predict. David Anderson, researcher at the European Centre for Medium-Range Weather Forecasts, uk , says, "How the Indian Ocean and the atomsphere in the region interact and influence or are influenced by climatic changes is far from clear."

Predicting the arrival of the monsoon, for the scientists at imd involves close observation of satellite images and other data and statistical manipulation. For the average Indian, it's about looking out for familiar signs of change in their surroundings. People in the lower northwestern Himalayas know the monsoon is around when they hear the famed call of the pied cuckoo. And the arrival of monsoon is erratic, there have been years when it has arrived later than what's taken as the normal date of arrival on the Kerala coast, June 1, and at times early. Predicting how much rain will fall during the season is a much more difficult task.

imd uses a statistical model to predict rainfall. It incorporates 16 regional and global temperature, pressure, wind and snow cover-related parameters in the statistical model, tracking the correlation between them and the amount of rainfall. Kelkar, explains: "Four of the parameters that imd used till 2000 were replaced with the South Indian Ocean sea surface temperature ( sst ), Darwin Pressure Tendency and Arabian Sea sst and European Pressure Gradient." The science and art of monsoon prediction, evidently has been fast evolving. But a model, at the end of the day is a statistical predictor, therefore has its built in errors, at times because the parameters themselves are correlated and the change in one alters the other, increasing the size of error in the prediction. The estimated error of the current model is of the order of plus or minus four per cent.

Yet imd has been right on in predicting the amount of monsoon for the past three years. The monsoon has been 'normal' as imd terms it. Yet parts of country have still faced drought (see: ' Drought of Relief ', Down To Earth , Vol 10, No 2, p30) in these years. In fact 11 states are suffering drought even as this story goes for publishing. Is the weak monsoon to blame? No says Kelkar. Bad monsoons are not always logical precursor to droughts. Droughts can be hydrological droughts, which Kelkar says, "...are about management of water resources."

Indira Khurana, coordinator of the Delhi-based non-governmental organisation Centre for Science and Environment's Natural Resource Management unit, says, "Droughts result from mismanagement by the government, not by the vagaries of nature." Kelkar, presenting a lecture at Delhi on May 31, told that Gujrat, Rajasthan and Madhya Pradesh make for the rain deficient area. But parts of the rest of the country also suffer drought reinforces Kelkar's point.
But the Indian monsoon needs to be looked upon as part of the global climatic dynamics. And events like the El nio southern oscillations ( enso ) also affect the monsoon. A study by U S Dey and R K Mukhopadhyay, resaerchers at the Pune office of imd , found that an enso year is correlated with higher northeast rainfall. J Chattopadhyay and R Bhatla, researchers at the department of geophysics, Banares Hindu University, have also shown in their study that there is a strong relation between enso events and poor performance of monsoon, though the enso monsoons occur in normal monsoon years. Peter J Webster, researcher at the program in atmospheric and oceanic sciences, University of Colorado, usa , and his colleagues have shown that the Indian Ocean region seems to be, in some aspects, independent of external phenomena such as the enso . But the extent to which, and how the ocean-atmosphere dynamics determine the state of the Indian Ocean system are not resolved. These finding are enough to confound not only a reader but also meteorologists and experts. Kelkar says, "We are yet to understand the effects of El nio and how it affects the monsoon."