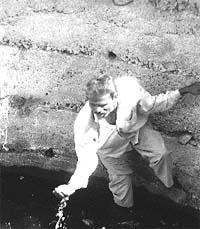 the release of toxic emissions by chemical, paint and other polluting industries in the Ranga Reddy district of Andhra Pradesh is leading to serious genetic disor-ders among the people. P P Reddy, an expert in genetic toxicology and the director of the Institute of Genetics, Osmania University, Hyderabad says that deadly effects of air and water pollution are at work in the peripheral areas of the district, causing mutation in human genes. As a result, disorders, including birth defects, have been reported in the families of workers due to chromosomal break up.

A recent study conducted by a team of the department of genetic toxicology revealed that farm workers involved in spraying noxious pesticides in the Ranga Reddy district were prone to genetic disorders. Reddy says that it is very difficult to study the incidence of such disorders as entry into industrial units engaging workers in hazardous conditions is restricted. "The government should make it mandatory for industries to study working conditions and organise routine health check-ups for workers periodically," say Reddy.