To die, Warangal farmers have to no longer consume pesticides. A mere exposure is enough to kill them 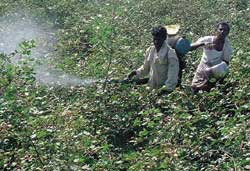 for the past several decades, a killer had been let loose in Warangal district of Andhra Pradesh. Perfidiously, ruthlessly it strangled its victims. None dared to charge him guilty. But now it has been caught red handed. For the first time, a report has nailed down exposure to pesticides as the cause behind farmers dying in the district. A cocktail of pesticides has taken its toll on 500 Warangal farmers between August and December 2001, according to the report The killing fields: farmer deaths due to exposure to pesticides in Warangal district. "For the first time, deaths resulting from exposure to pesticides have been reported in the district. Before this, incidences of health affects were only accounted for," said P Damodar, head of Warangal-based Sarvodaya Youth Organisation.

The unending saga of Warangal's plight due to pesticides had made headlines in 1998, with innumerable farmers committing suicide in the wake of pesticides failing to protect their standing crops from the menace of pests. Up to their neck in whopping debt, the farmers were left with no choice but to commit suicide by consuming pesticides -- the very root of their woes. Their debts were mainly a result of using the chemicals in quantities that even astounded pesticides dealers. Even in the cropping season of July 2001-January 2002, over 600 metric tonnes of pesticides were used in Warangal. Maximum consumption of pesticides was said to be from September to November. Ironically, most death cases were also reported during these months. The first case of a farmer dying while spraying pesticides was reported in September 2001 by A P Raithu Sangham, a local farmers' association. Taking a cue from this, New Delhi-based non-governmental organisation Toxics Link, along with Sarvodaya Youth Organisation, Hyderabad-based Centre for Resource Education, and Bangalore-based Community Health Cell, carried out a survey in six mandals (blocks) of the district in January 2002. The report was complied on the basis of this survey.

The survey team found that most of the mandals had many gory stories to relate. For instance, in Mogilicherla village, 22-year-old Bela Shankar had complained of stomach pain and general weakness after spraying Cypermethrin in his field. Within two days he died. Enakunthala Ravi, a migrant labourer in Akkampeta village fell unconscious while spraying Metacid. He expired the next day. Apart from such death cases, numerous health problems also plague Warangal. These include, dizziness, respiratory congestion and abdominal pain.

Other than these, women suffer from many gynaecological problems. They often assist the males of their household during the spraying. Due to this, they are continuously exposed to pesticides. According to the report, instances of miscarriages, breast cancer and uterus sores are very high among the district's women. They often complain of not menstruating for six months to two years after delivery. "Warangal has gynaecological problems that have not been documented or studied," said Madhumita Dutta, central coordinator of Toxics Link. Even, the doctors at the Warangal office of Indian Medical Association opine the same. "The gynaecological problems could be due to pesticides," they said.

However, such statements fail to evoke a reaction from the local administration and the state government. Both sideline the issue. Moreover, they claim that only 10 deaths have been reported so far and that too due to illiteracy among farmers and lack of information about the correct usage of pesticides. "We are trying to educate the farmers about the correct ways of spraying pesticides. We have even distributed kits to be used while spraying pesticides," said Muralidhar Rao, joint director of agriculture, Warangal. But when the survey team questioned the farmers, they had no clue about such a campaign or kit.

According to experts, the government is abetting farmers' deaths by blindfolding itself from the problem. A recent issue of newsletter, Pesticide Safety News , published by the International Centre for Pesticide Safety points out that exposure to pesticides can result in acute poisoning, which can lead to death within 24 hours of exposure. This corroborates the results of the survey. Experts opine that the survey is an indication of a much larger problem. The situation in Warangal needs to be studied scientifically and an in-depth investigation should be done to gauge the complete extent of damage.