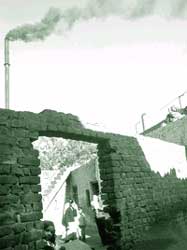 Tucked along the eastern fringe of Delhi is Karkar Model village of Sahibabad in Uttar Pradesh's Ghaziabad district. The village's main fault: it is outside Delhi and in the middle of what has become a major industrial area. In recent years, the village has become the location of choice for clandestine operations of polluting industrial units kicked out of Delhi. All this has left the water and air severely polluted. There is no redress for the residents.

Mahendra Singh Raghav, 35, has a small shop just outside his house, but struggles to run it. He spends his time either inside the house or at the nearby hospital due to a severe breathing problem quite common here. "About 20 patients come to me daily with breathing problems," says Sonu, a medical storeowner. The village's six other medical stores have similar stories to tell.

But some say Mahendra is fortunate. "His breathing problem hasn't yet developed into tuberculosis (tb)," says Satish, who provides the village direct observer treatment (dot), a programme run by the National tb Control Programme. "Nearly 200 cases of tuberculosis have mushroomed in the village in the last 3-4 years. They begin with breathing problems," Satish reveals. He has a list of 46 patients, to whom he provides medicine. This excludes 'defaulters': patients going to private hospitals. Satish estimates one hundred patients in the village are getting medicines from an Employee State Insurance Corporation (esic) hospital at Ghaziabad: "Most are children needing milder medicines. Some prefer private hospitals. Many cases don't even come to light, for people hide their disease fearing stigma." There are patients from all ages.

The villagers say the cause is the dense black smoke from illegal factories inside the village and from the industrial area of the Uttar Pradesh State Industrial Development Corporation (upsidc). Can air pollution cause tuberculosis? M P Singh, Ghaziabad's chief medical officer, says, "It doesn't cause tb, but plays a crucial role in spreading it. It causes bronchitis, and bronchitis patients are more vulnerable to tb."

The story of the village's pollution begins in 1962, when upsidc acquired nearly 587 hectares of land from six villages (including Karkar Model) for the development of the Sahibabad industrial area's Site- iv. upsidc has given to industry a large plot marked for a community centre (see map). But it was in the early 1990s that the area started developing its present industrial profile. Factories surrounding Karkar Model manufacture all kinds of things -- paper, food colours, tyres. Every evening black smoke envelops the village. The factories' unrestrained extraction of groundwater has sent the water table plummeted: from eight metres 10 years ago to 46 metres now. What comes out from such depths is anyone's guess.

It is common knowledge that factories pump untreated effluent into groundwater, though this is very difficult for anybody to prove. "One could plumb down to 50 metres and get yellowish water that stinks," says Ali Mohammad, a borewell contractor. Villagers don't drink this water. "Milk curdles if we add our hand pump water to it. The same happens when we prepare tea with this water," says Kamla Devi, 60, a housewife who hired Mohammad again after her freshwater yielding hand pump dried up. "It started getting bad after this paper mill came up adjacent to our village," she says. They now fetch drinking water from a hand pump in a park outside the village.

It isn't that the authorities are unaware of the groundwater crisis. In April 1999, the Central Ground Water Authority published a notice in newspapers that classified the Ghaziabad municipality as "critical area" in view of the contamination of groundwater with toxins from factories. It is obvious that the up State Pollution Control Board (upspcb) and the district administration didn't take this notice. One year later, an incident highlighted the severity of the contamination.


"Borewells of a company called Moon Beverages, about 100 metres from our village, started yielding blood-red water," says Sushil Kumar, a journalist who lives here and has reported on the pollution extensively. upspcb officials were alerted. Several newspapers carried the story. Advocate M C Mehta filed a petition in the Supreme Court on the basis of these news reports, saying the industrial units were discharging untreated toxic effluents into the groundwater and, consequently, polluting Delhi's water. He sought directions from the court to the authorities concerned, including upspcb and the Central Pollution Control Board (cpcb).

The court directed cpcb carry out an investigation of groundwater contamination in and around the industrial area as well as the border belt of Delhi-Ghaziabad. cpcb did so in August 2000, taking 26 samples. One sample, collected from the premises of Moon Beverages, was reddish yellow. When measured on the Hazen scale, the sample's colour intensity was 461 units, against the maximum permissible colour intensity limit of 25 Hazen units.

So, who was the culprit? Here's what the report says: "The trickling of colour into the borewell of Moon Beverage is most likely from the activities of Arvind Rubber (P) Ltd, A-31/1, Site- iv of Sahibabad Industrial Area, up, which manufactures food quality dyes." But cpcb also suggested that the contamination is location-specific and would not affect Delhi. "Is it only Delhi that needs good quality water?" asks Sushil Kumar. Delhi is worried only about contamination of its water from Sahibabad, not about the polluting units kicked out of Delhi that are now operating here.


Beginning 2000, the Delhi government has been sealing out polluting industrial units from non-conforming areas. Several units have been moved to residential areas of villages on the periphery of Delhi, like Karkar Model. Ideally, the up government should carry out surveillance of these factories operating from inside villages like Karkar Model. "Nearly 15 units, including highly polluting ones like dyeing, melting and plate-coating operations, are operating round the clock in our village. They have taken up houses on rent. The villagers are happy to get such high rents. But these units have made our lives miserable. Fumes and waste from them overwhelms us, even inside the house. At least the factories in the industrial area are outside the village, and their pollution peaks only in the evening," rues Braham Prakash, a resident.

"We complained thrice at upspcb's office. Every time the regional officer promised to get the units closed in 15 days. But there's never been any action. They all are hand in glove," alleges Ravendra Singh Raghav of Karkar. R C Chaudhari, upspcb regional officer, retorts: "I have got the units functioning in the village closed thrice. Every time it's the villagers who give their land to these units for rents of Rs 4,000-5,000 per month. The units start functioning again from a different house." But when confronted with a list of eight units functioning in village, Chaudhari pleaded helplessness, saying he hasn't "the force required to close down these units".

Moreover, a rift continues in the village between those worried by the health effects of pollution and those lured by additional income: can the pall of black smoke over Karkar ever lift?