Delhi allocates a fourth of its budget for improving transport

IT IS a budget with concern for the environment. The Delhi government has made diesel cars costlier and bicycles cheaper. 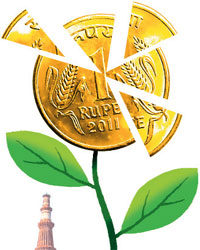 It has proposed an additional tax of 25 per cent in the current automobile tax structure at the time of registration of diesel vehicles. Diesel cars defeat clean air initiatives in urban India. Indian emission norms allow diesel vehicles to emit more pollutants like particulate matter and nitrous oxide than petrol ones. Differential fuel pricing policy and subsidies also drive sales of such vehicles. Currently, diesel cars account for 36 per cent of the new sales.

The hike is aimed at reducing “polluting emissions” from the growing number of diesel vehicles in the capital. Denmark and Brazil also levy additional taxes on diesel vehicles to offset low fuel prices.

This is not the first time Delhi government has proposed such taxes. In 2004, a similar initiative to impose an additional two per cent tax had to be abo rted due to backlash from the automobile industry. The industry still remains hostile to the idea. Vishnu Mathur, director general, Society of Indian Automobile Manufacturers, says, “How can a vehicle following the emission norms set up by the government itself be considered polluting?”

Experts think additional taxes alone may not help. “Many vehicles, including buses and autorickshaws, registered in neighbouring Uttar Pradesh and Haryana run on Delhi roads,” says H B Mathur, former professor of mechanical engineering at IIT Delhi. These vehicles should be made to follow the maintenance norms set for automobiles registered in Delhi. Mathur believes introduction of clean diesel (diesel with 10 parts per million of sulphur used along with advanced emissions control systems) could be another way forward.

The budget also allocates 25 per cent of the state’s total monetary resources for building transport infrastructure and pitches for tax rebates for nonpolluting transportation. It proposes waiving the value added tax (VAT) on cycles costing up to Rs 3,500. This price cap covers the roadster bikes of all leading cycle manufacturers including Hero, Avon and Atlas. Chris Kost, a transport planner and cyclist from Ahemdabad, says, “This will promote cycling and complement the cycle tracks developed in Delhi.” Around 12 per cent of Delhi travels on cycles.

The city’s bus infrastructure will also be revamped. A Corporate Bus Operating System will replace the existing private bluelines. For this, Delhi will be divided into 17 clusters, and only one operator will be allowed. Four teen new bus rapid transit (BRT) corridors will be set up at a cost of Rs 450 crore.Diesel vs Cars Environment
Science vs economics of cess on diesel
Centre rejects Delhi government's proposal to ban diesel cars