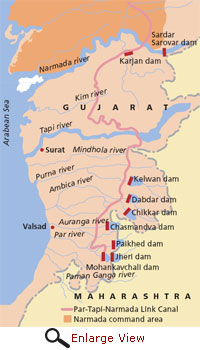 RESIDENTS of Kelwan in Gujarat’s Dang district do not allow outsiders to enter their village, especially people who seem city dwellers. They take them to be government officials who would conduct surveys for a project that will submerge their land and take away the area’s water to benefit industry.

Their fear stems from the memorandum of understanding (MOU) Gujarat and Maharashtra signed on May 3 with the Central government for a detailed project report of the Par-Tapi Narmada Link Project. The project will transfer so-called surplus water from rivers in Dang and Valsad districts in south Gujarat to water deficit Saurashtra and Kachchh in the north. The project proposes dams in these two districts and one in Nashik district on the Maharashtra-Gujarat border along with a 395-km canal to link these dams with the Narmada command area.

Part of the National Inter linking of Rivers scheme, the project will divert a total of 1,350 million cubic metre (mcm) of water from these areas to the Narmada command area. An area of 7,559 hectares (ha), of which 3,572 ha is forestland, would be submerged, affecting around 14,832 people and 9,029 livestock.

The population in these two districts is tribal predominantly, and they are protesting against the project saying they do not want to part with their land and water. Kelwan residents broke the instruments of the land survey officials and chased them from the village in January this year. “The government says it will divert the surplus water. How can it say there is surplus water when many villages in Dang and Valsad have drinking water shortage?” asked Michael Mazgaonkar of Paryavaran Suraksha Samiti, a non-profit in Gujarat.

According to the project’s feasibility report, 7,041 mcm water will go to Saurashtra and Kachchh and 460 mcm will be utilised to irrigate 1.63 lakh ha en route; 149 mcm will be lost along the link canal during transmission. There is also a provision for generation of about 32.5 MW. The areas affected by the project will get little benefit from the project, said Raghunath Babul of Socialist Unity Centre of India (Communist).

“Dang and Valsad are not in the priority of even en route irrigation. The water will not benefit drought affected north Gujarat, it will benefit only industry,” Babul said.

R K Jain, chief engineer in the National Water Development Agency that prepared the project’s feasibility report, said Dang’s topography is not suitable for irrigation; efforts would be made to solve the drinking water woes of the area in the project.

Villagers are clear they would not give away the land for the project. “We have been living here for the past five generations. It was a rocky terrain. After a lot of hard work we have made it fertile. We have toiled to preserve the forest and rivers of this land. We cannot just let it go,” said Jeev Bhai, mukhiya (village head) of Chikar village in Dang.

Mana Janu, 65, a resident of Chikar, said, “The government kept conducting surveys, preparing reports but we were not informed. We came to know only when we read about the MOU in the newspapers,” he said.

According to the feasibility report prepared in 2004-05, the total cost of the project is Rs 6,016 crore and the cost-benefit ratio is 1.08. “The government is putting lives of 15,000 individuals at risk for a mere 8-paise profit on a rupee,” said Mazgaon kar. The environment impact assessment is being done by the Water and Power Consultancy Services, a public sector undertaking. 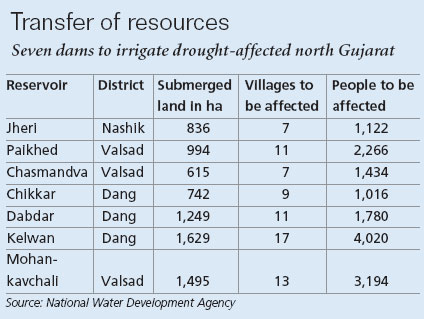