Recycling of discarded vehicles soon to be mandatory in Europe 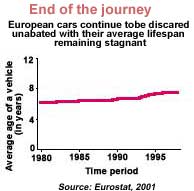 at least 27 million vehicles are junked every year. Ever wondered what happens to them? Studies show that they spawn an environmental disaster that governments are finding difficult to handle. The European Union (eu ) has taken the lead in reversing this trend. From April 21, 2002, with the implementation of the end of life vehicles (elv) directive, recycling of old vehicles will be mandatory throughout Europe. The legislation was passed in 2000 by the European Union, despite stiff opposition from the automobile industry.

Recycling is not a new concept for this part of the world -- on an average 75 per cent vehicles are already being recycled. For example, in the uk, 75 per cent of the 1.5 million cars and 37 million tyres scrapped annually are recovered. Such recovery rates can be attributed to the work done by organisations like the Consortium for Automotive Recycling (Care) -- a collaboration of top vehicle manufacturers, importers and dismantlers of the uk. Care's main work focuses on disseminating and providing a database of detailed information about recyclable components and researching on advanced recycling methods.

However, such efforts are concentrated in just a few European countries. In places like France, 20 per cent vehicles are just abandoned. In Germany, due to high recycling cost to the last owner, the number of abandoned cars sharply rose in the early 1990s. Such factors have given rise to a quandary that is described as a "massive waste management problem." Moreover, currently used recycling practices are unsystematic and far from being ecofriendly. Discarded vehicles generate 8-9 million tonnes of waste every year. The space for landfills is running out and their cost is rising. This has led to both an economic and environmental dilemma.
The elv directive would go a long way in solving these problems. Its uniqueness lies in the fact that it is based on 'polluter pays' principle -- manufacturers and, partially the recyclers, have been made responsible for the discarded cars. Moreover, this is applicable to both new as well as the 160 million vehicles already plying on the European roads.

As per the other provisions, beginning 2005, 85 per cent of a vehicle that is manufactured should be recoverable, reusable and recyclable. This would rise to 95 per cent by 2015. If these targets are achieved, the amount of recyclable waste disposed of in landfills is estimated to decrease from the current levels of 25 per cent to less than five per cent. To make this possible, manufacturers have to use appropriate raw materials. Along with this, use of raw materials like lead, mercury, cadmium and hexavalent chromium have been banned from July 2003. The requirements have to be integrated in the design and production of new cars. These goals could also be included in the European vehicle type-approval standards, whose only environmental criterion at present is emission levels.

In order to facilitate the dismantling, recovery and recycling of elv s, the manufacturers have to provide authorised treatment facilities and equip them with requisite information, especially pertaining to hazardous materials. They can either do so on their own or can collaborate with a recycling company. Furthermore, every country has to ensure that the recycling market is open to all, especially to small and medium-sized enterprises. Besides this, all recycling units have to get an environmental clearance for their set-up.
Not surprisingly, the directive has been welcomed by environmental groups and criticised by the automobile industry. The prospective cost, estimated to be us $5.23 billion, seems to have frightened the manufacturers.

Ironically, the recycling industry is also up in arms against the directive. "'De-pollution' would be very costly," said Jean Burnod of cff Recycling, a France-based recycling company. Already, the recycling industry is facing numerous problems. The major one is increase in the use of non-recyclable raw materials such as plastics. Greater complexity in vehicle designs and stringent environmental regulations are some others. For instance, Germany has categorised automotive shredder residue (asr) as a hazardous waste that qualifies for a higher landfill tax. Even France and the uk have brought forward legislation that make dumping of asr in landfills more expensive.

The directive is just a step forward in such directions. Meeting environmental norms as mandated by it would mean extra financial burden for the recyclers. They also fear that manufacturers would have the last word about their market's price mechanism and entry of numerous new units may mean tough competition.

The antagonism among the manufacturers and the recyclers is further confounded by the fact that the ratio of cost division is still uncertain. "In most countries, no decision has been taken," says Tony Bird of SimsMetal, an uk -based scrap supplier.

The directive has also been criticised by a few experts who are weary that mandatory recycling might become the means for legitimising new car production rather than restricting their numbers. According to them, recycling can only be an interim measure.
The directive would definitely go a long way in inducing the manufactures to start recycling. However, a number of automobile companies already have some form of recycling infrastructure in place. It was largely developed in the 1960s as a result of advancement in vehicle crushing and shredder technology. Furthermore, some automakers have been for long incorporating allowances for recycling in their budgets. bmw is one such manufacturer, which has developed its recycling network in Switzerland, The Netherlands and Austria. The largest recycling initiative has been taken by fiat in its domestic Italian market, where the firm has launched a nationwide network of over 100 recycling sites called the fiat Auto Recycling System (fare). The network has been built on the notion that a network of smaller recycling units is economically more viable and gives more impetus than one or two big disassembly sites.

To make their recycling operations economically viable, the vehicle manufacturers have even collaborated with each other. The Mercedes-Renault deal, announced in 1995, is a good example. Essentially, the two companies have agreed to open their 'domestic' recycling infrastructure for one another's cars. Even fiat , Renault, bmw and Rover have entered into a similar type of agreement.
Europe is not fighting a lone battle against the menace of discarded cars. Many other countries have taken similar initiatives, though the levels vary. For instance, in the us about 95 per cent of all cars and trucks are recycled -- much more than any other product like newspapers and beverage cans. In British Columbia, preliminary discussions among various stakeholders are going on to analyse options for recycling discarded vehicles. The focus of the discussions is to create a mechanism that would reduce or eliminate reckless abandoning of junked cars.

The Taiwanese government has recently implemented the waste motor vehicles recycle and disposal regulations that hold manufacturers responsible for the discarded vehicles. The Foundation of Recycle, Reuse and Recovery, which was established to facilitate the implementation process, has set up an extensive recycling system in collaboration with the local recyclers.

In Japan, where at least five million cars are scrapped annually and 800,000 tonnes of non-recyclable waste is generated from them, the manufacturers have been asked to increase the percentage of recyclable raw materials from 75 per cent to 85 per cent by 2002. This would increase to 95 per cent by 2015. The Japanese government is even urging automakers to develop raw materials that are 90 per cent recyclable.