As people hunt animals from zoos to feed themselves, the President, accused of extrajudicial executions, is busy blaming the US and the opposition party 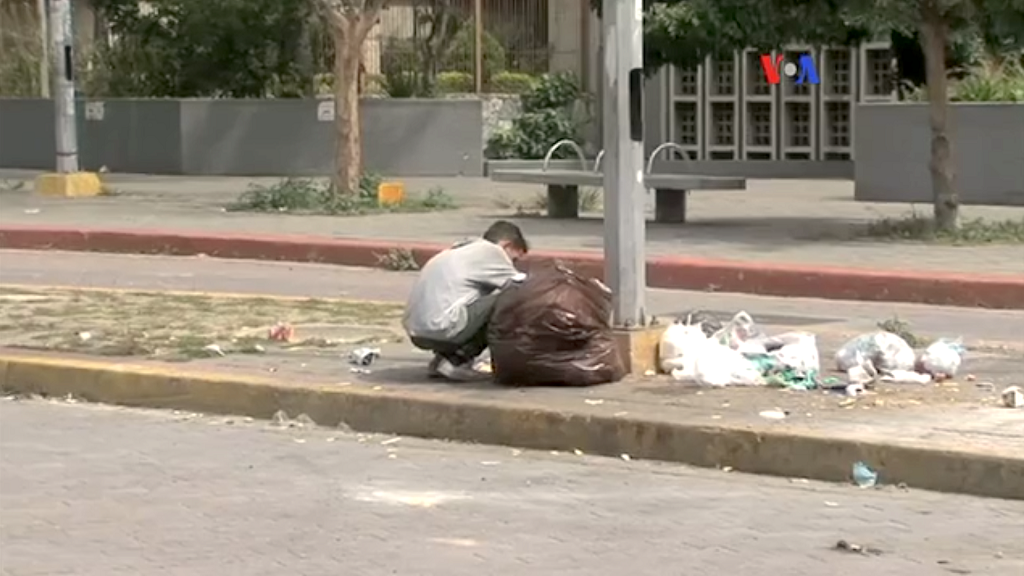 Chronic food shortages have left millions of people hungry and in search of food wherever they can find it. Credit: Wikimedia Commons

In a video published January this year, a group of people are seen cornering a cow in Venezuela’s western state of Mérida before stoning it to death, as the narrator of the video screams, “They’re hunting. The people are hungry!”

Hungry mobs in the area also ransacked a food collection centre and a supermarket.

In December 2017, thieves broke into a veterinary school in Maracay city, which is west of the capital Caracas, stole two pregnant thoroughbred horses and slaughtered them for meat.

Thieves have also stolen animals from zoos to eat them. Zulia Metropolitan Zoological Park head Leonardo Nunez said a wave of thefts had affected 10 species including a buffalo, which he said was cut into pieces, was orchestrated by “drug dealers” seeking to sell the animals. Some robberies have also involved endangered species, like tapirs.

Fall of the oil-rich nation

The food crisis in the Latin American country--which ironically has the largest known oil reserves in the world--has turned dire, with Venezuelans reporting a loss of a shocking 11 kg in body weight last year, according to a university study published in February that also estimated 90 per cent of the population to be under poverty.

Inflation has already led to the collapse of agricultural productivity, commercial transportation and other services. This has resulted in chronic food shortages that have left millions of people hungry and in search of food wherever they can find it, including in garbage bins. Venezuelans spend more than 30 hours a week waiting in lines to shop, and are often confronted with empty shelves when they finally enter a store. Meanwhile, the government has less cash to import food because of its mismanagement of the oil sector, where production has fallen to a 29-year low. Hyperinflation and the collapse of the currency have put the prices of foodstuffs available on the black market beyond the reach of many families.

The country imports food primarily from Brazil, Colombia and Mexico because the government stopped cultivating its rich farmland years ago. For the first five months of 2017, food exports from these countries to Venezuela were down 61 per cent from the same period in 2015, according to research firm Panjiva. Coming to medical shortages, 756 women died during and shortly after childbirth last year, a 76 per cent increase from 2015, according to a rare release of government records. Around 11,500 infants died in 2016, a 30 per cent rise from the previous year, while malaria cases jumped to 240,000, a 76 per cent rise from 2015.

The chaotic fall of the oil-rich nation’s socialist economic model is one of the worst in the Western Hemisphere in modern times under President Nicolas Maduro, who has brought the country, close to an autocratic rule. The 55-year-old controversial leader, whose democratic government was once praised worldwide, has dragged his socialist government into a third decade in power by winning a second term in the May 20 elections.

The polls were marred by low turnout, a boycott by the main opposition and allegations from rival candidates of voting irregularities. Opposition parties had called for a boycott, citing a lack of basic electoral guarantees, transparency, and enough time given for preparation. “I just decided I wasn’t going to fall into their trap again like I had before. We knew what these results would be from the beginning,” Raquel Hernandez, a longtime opposition supporter told the media.

Maduro’s closest challenger in this month's presidential polls, Henri Falcon--a former state governor who was once a henchman of socialist leader Hugo Chavez but broke with him to join the opposition--has asked the Supreme Court to order new elections. He has argued that Maduro's ruling party unfairly influenced the polls by setting up kiosks near voting centres and giving poor residents bonuses. However, the Supreme Court rarely votes against Maduro.

The Trump administration has dismissed the election as a "sham" with US Vice President Mike Pence calling it "a further blow to the proud democratic tradition of Venezuela". A video circulating on the social media shows Maduro triumphantly waving to what appeared to be an empty plaza. Maduro blames his opponents for the country's economic woes and says US sanctions on Venezuelan leaders only serve as proof that America is waging an "economic war" even as the opposition accuses his government of economic mismanagement.

Maduro took the reins of power from Chavez after his death in 2013 and calls himself the “son” of the leader, who ruled Venezuela from 1999-2013, winning a plethora of elections due to his oil-fueled social welfare policies, charisma, and connection with the poor. He is still revered by many, though critics blame his populist policies for being the base for the current economic meltdown as his policies were not sustainable if the oil prices fell. That is exactly what happened in 2014 under Maduro’s presidency. He and his cronies, including the military, are accused of spearheading the import of food at the special currency rate of 10 bolivars to $1 and its sale in the black market at a massive profit.

Over the last four years, its GDP has fallen by 35 per cent, which is a sharper drop than the one seen in the Great Depression in the US. And, the country’s murder rate has surpassed the most dangerous cities in the world.

A DatAnalysis poll in 2016 had shown that about 80 per cent of the people want to remove Maduro from office. But instead he has consolidated his power. It seemed like a potential political turning point in 2015 when opposition leaders won a majority of seats in the National Assembly, dealing a blow to Maduro. Early in 2016, Maduro stacked the Supreme Court with his supporters to block the National Assembly from impeaching him. Then, in March 2017, the Supreme Court attempted to dissolve the National Assembly altogether and take over its functions, triggering months of violent protests that have killed around 100 people and left over 1,000 injured. He also set up the pro-government National Constituent Assembly in July 2017 with the intention of rewriting the constitution. The body has not been recognised by the country's opposition, the European Union or the US.

Recently, a panel of independent international experts found "reasonable grounds" to refer Venezuela to the International Criminal Court for crimes against humanity, according to the Organisation of American States. In a report, the experts have identified over 8,292 "extrajudicial executions" since 2015, "often a result of various security forces conducting unlawful and violent home raids where false confrontations are staged to rationalise the summary executions of, commonly, young men". The document identifies 11 men, including President Nicolas Maduro and Vice President Tareck El Aissami, as the masterminds of the repression.

With Maduro coming to power for another six years, the future of the country coming back to normalcy looks bleak.