Least Developed Countries (LDC) will put in their worst economic performance in three decades this year due to the novel coronavirus disease (COVID-19) pandemic, a report by the United Nations said December 3, 2020.

Between October 2019 and October 2020, the economic growth forecast for LDCs was revised sharply downwards from 5 to -0.4 per cent, according to the report released by UNCTAD.

This revision was expected to lead to a 2.6 per cent reduction in per capita income in LDCs in 2020, with 43 out of 47 LDCs experiencing a fall in their average income levels.

The impacts of this would be far-reaching The Least Developed Countries Report 2020 noted.

The number of people living in extreme poverty (earning less than Rs 150 per day), will increase by over 32 million in 2020, according to UNCTAD estimates because of COVID-19.

Total remittances to low- and middle-income countries (LMICs) are also forecast to fall by one-fifth in 2020, with an even sharper contraction expected in South Asian and sub-Saharan African countries. 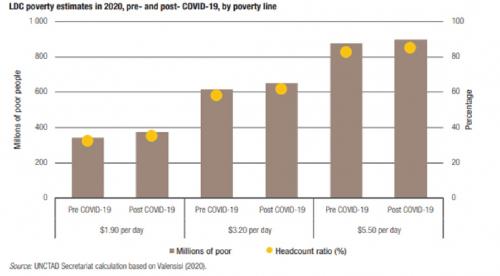 This increase in poverty will roll back some of the progress made towards sustainable development and possibly lead to long-term damage, the report said.

Progress on the UN-mandated Sustainable Development Goals (SDG), especially Goal 1 (‘No Poverty’) as well as those related to health and education will stall, according to the report.

The report said that LDCs were the litmus test of the SDGs: If they were to succeed globally, they would need to be achieved in those countries that were farthest from the goals, ie the LDCs.

Hence, it called for an authentic global partnership to ‘leave no one behind’.