The coverage of the food processing sector needs to be scaled up to create an additional market for farm outputs, the Economic Survey 2019-20 has stated.

The food processing sector had been growing at an average annual growth rate of more than five per cent over the last six years ending 2017-18, the document noted.

It added that a number of schemes, including the flagship Pradhan Mantri Kisan Sampada Yojana (PMKSY) had been floated by the Union Ministry of Food Processing to reduce post-harvest losses

The survey’s recommendation that the food processing sector needs coverage is backed by the report of the Seventh Lok Sabha Standing Committee on Agriculture.

The committee had noted that the flag ship scheme, PMKSY, had not been implemented properly.

PMKSY was initiated for the period 2016-20, with a budget allocation of Rs 6,000 crore. It provides subsidy-based support to create robust modern infrastructure for agriculture and agro-based industries along the entire value/supply chain.

The scheme aimed to reduce wastage of agriculture produce, increase processing level, enhance the export of processed foods, and enable availability of hygienic and nutritious food to consumers at affordable prices.

However, the scheme has failed to meet the targets for which it was floated. For instance, Operation Greens, one of the sub schemes under PMKSY, focuses on “integrated development of Tomato, Onion and Potato”. 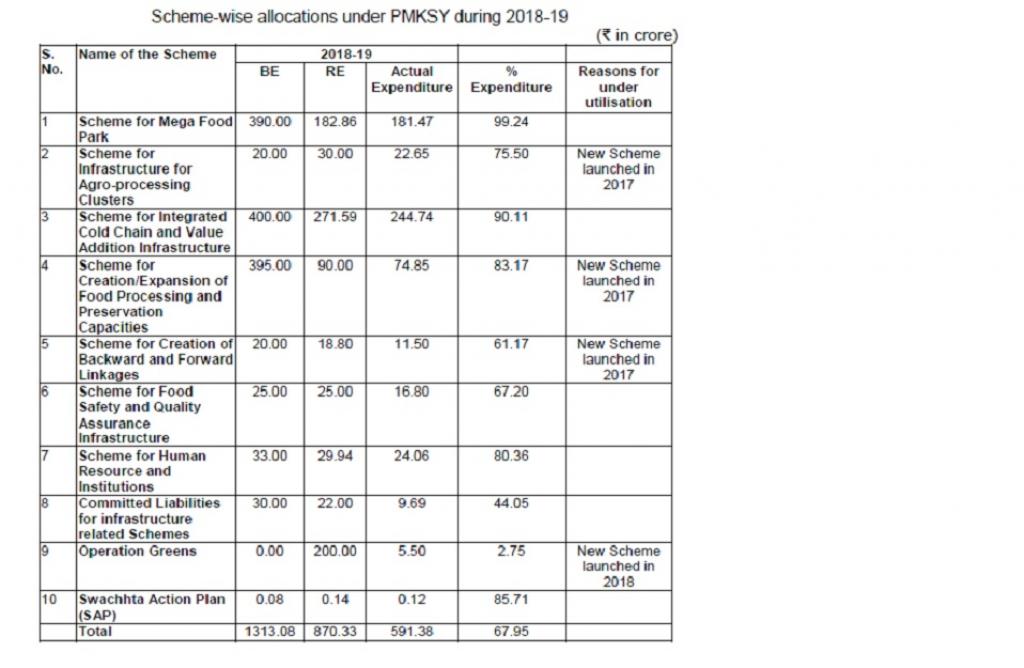 Similarly, Mega Food Park (MFP) is another scheme under PMKSY under which targets have not been met. Of 42 MFPs sanctioned by the government, only 17 have become operational.