The 15th Finance Commission has recommended the use of Census 2011 instead of the norm of considering Census 1971, and this change has led to political protests and accusations of bias as many states that have done well in controlling population will end up receiving less money from the Central tax pool 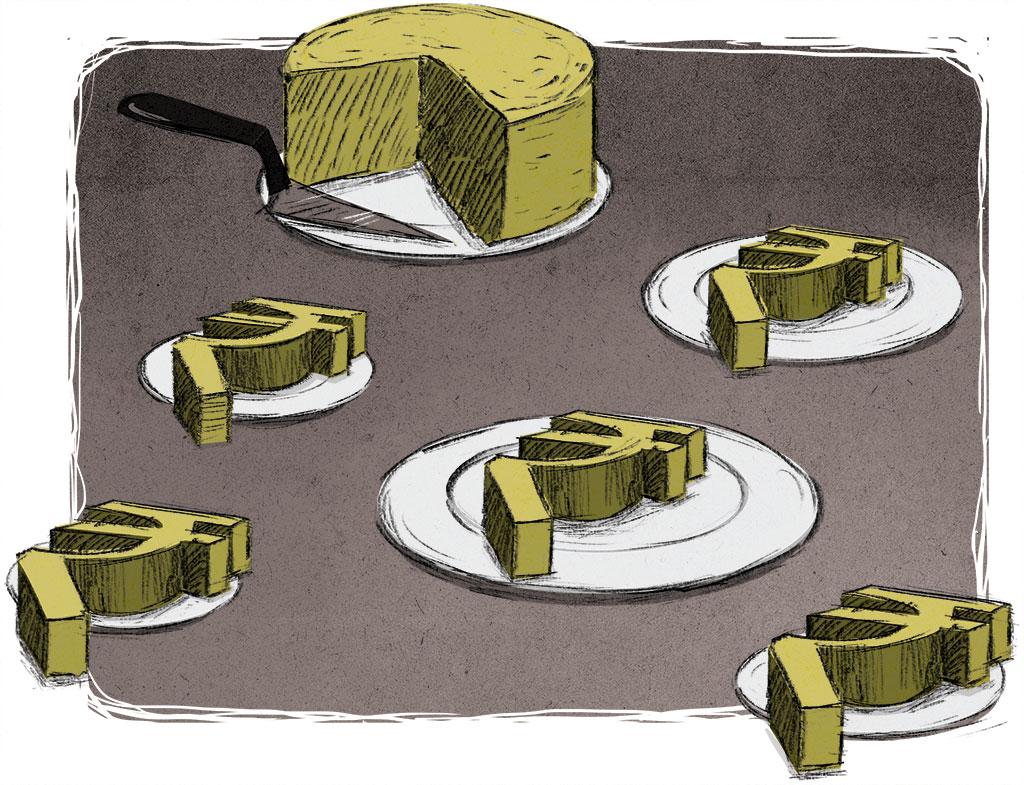 Setting up of the Finance Commission always makes the states uneasy. For this is the constitutional mechanism to share the Central tax pool with states. But the 15th Finance Commission has let out a paroxysm of political protests, particularly by the southern states, literarily dividing the states on north-south line. At the core of this lies a change in the base year for population figure that significantly decides the states’ tax revenue share

The Union government has recommended in the Terms of Reference (TOR) for the Commission that it should consider the Census 2011 figure instead of the established and mandated practice of using the 1971 Census. But, this “first” has not gone well with many states. They fear it would lead to a significant loss in tax pool share. Moreover, they see it as a punishment for enforcing the National Population Policy effectively. Kerala became the first state to oppose this change. In a memorandum presented to the Commission in May, the state government says that the change in base population figure would penalise horizontal share of taxes to those states which took successful initiatives to reach replacement rates of popula tion in accordance with the National Population Policy. The Commission, headed by former parliamentarian N K Singh, will submit its recommendations by October 31, 2019. These recommendations would come into effect from April 1, 2020 for the next five years.

It has become such a political hot potato that Prime Minister Narendra Modi took to Twitter to clarify that “a baseless allegation is being made about the TOR of the 15th Finance Commission being biased against certain states or a particular region” in April while declaring that states controlling population would be getting incewwntives. The Commission is yet to finalise the formula.

For the Commission, population has been a constant parameter in deciding the states’ share in the tax pool. In the 12th and 13th Commissions, population got 25 per cent weightage while the 14th Commission gave it 17.5 per cent weightage. Other parameters include income distance, forest cover, geographical area, fiscal discipline and tax efforts besides others which change according to the priority of governments. Like, the 15th Commission TOR removes the forest cover parameter, which was included for the first time in the 14th Commission. Instead, the latest Commission has been asked by the Union government to consider the financial needs of it keeping in mind the challenges of climate change, defence and internal security, infrastructure development and expansion of and effective railways.

Till 1976, the rule was that any decision factoring population was based on the preceding Census. Population is a base parameter for the election of the President, demarcation of Lok Sabha seats and also allocation of Central untied fund to states. However, to incentivise population control after the country reported the highest ever population growth during 1961-71, the Union government brought in a change in this norm. The Indira Gandhiled Congress government in 1976 froze the 1971 Census figure as the baseline figure through the infamous Emergency period 42nd amendment to the Constitution.

This change was valid till Census 2001. However, the National Democratic Alliance government led by Atal Bihari Vajpayee extended this to the first Census after 2026 through the 84th amendment to the Constitution. Going by this constitutional norm, population figure of the Census conducted in 2031 should be the base for any policy change. The reason for the recent change in parameter is still not known and that is adding fuel to the already raging debate.

K K George, an economist and chairman of the think-tank Centre for Socio-Economic and Environmental Studies (CSES), says, “This clause in the TOR goes against the assurance given in Parliament with a view to encourage control on population which was a national goal then and remains one now as well. The National Development Council (NDC) approved this policy in its 33rd meeting in 1979 and reiterated it in the National Population Policy in 2000.”

The last Commission significantly increased the share of states in Central tax pool from 32 per cent to 42 per cent (see ‘Central concerns’, Down To Earth, 1-15 February, 2016). This is another reason why the states fear that if population parameter is changed they would suffer a bigger loss of share as the baseline allocation is already higher than earlier. And they have a reason.

Now, take the example of Kerala. The state’s population was 3.89 per cent of total population of India in 1971. Thus, it will get similar percentage amount which is about Rs 4,139 crore. If the amount would have been distributed as per Census 2011, Kerala’s population was 2.76 per cent of total Indian population. If the same amount of tax share gets divided as per Census 2011, Kerala will get around Rs 2,937 crore, a loss of Rs 1,202 crore. Kerala government argues that this is a punishment for enforcing the national policy on population. 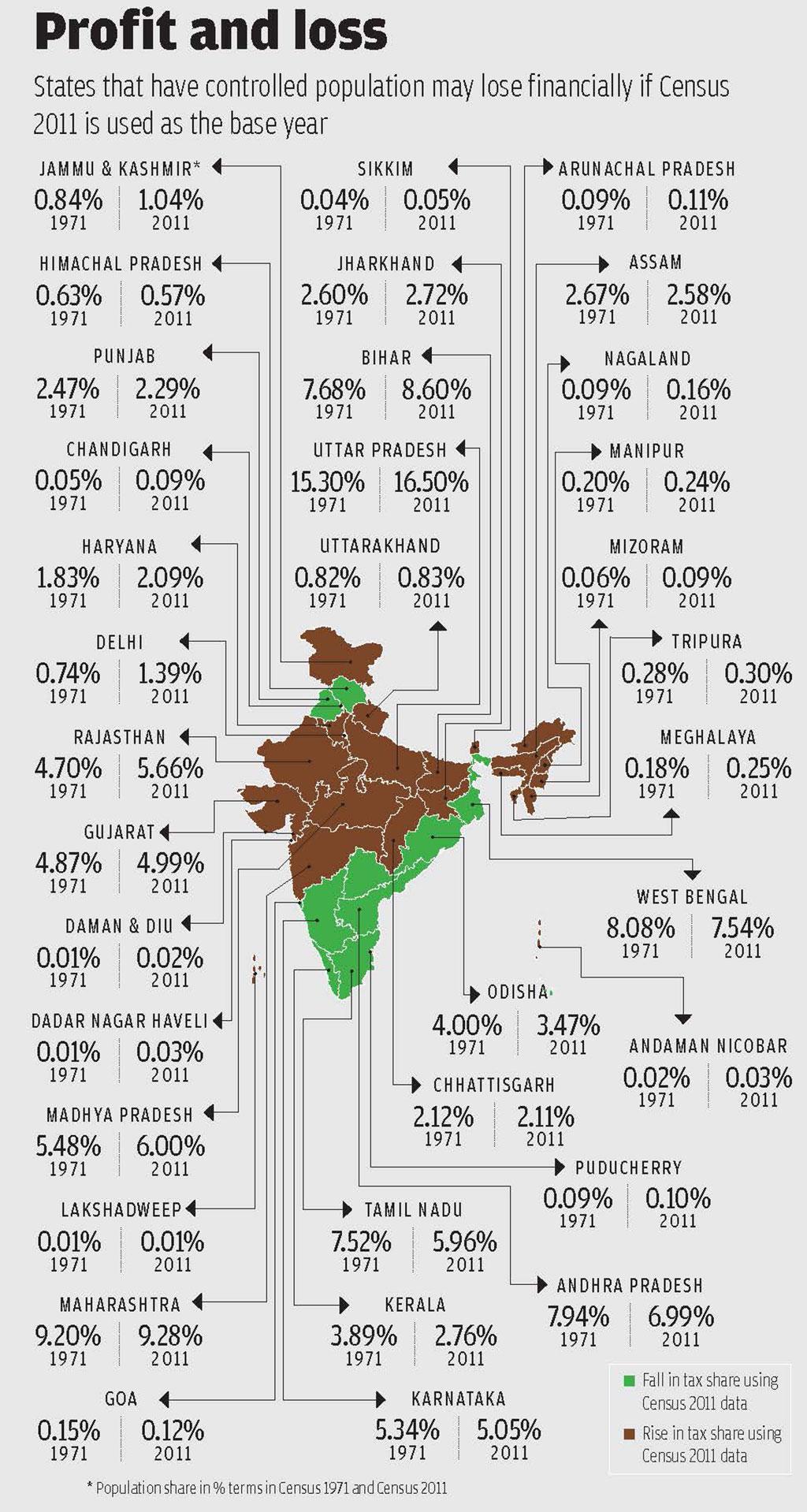 The financial losses with this change become clear when one looks at the change in population since 1971. Tamil Nadu (75.12 per cent) and Kerala (56.4 per cent) having lowest decadal population growth rate between 1971 and 2011 will suffer the most if Census 2011 is used as the base population and all other parameters remain the same. In these years, growth rate of India’s population is 120.8 per cent. Leaving Telengana, all four southern states’ population share between 1971 and 2011 has declined from 22.01 per cent to 18.16 per cent. So, these states will get 18.16 per cent of total money allocated for population instead of 22.01 per cent if the old parameter is applied.

CSES estimated how states would be impacted if the population baseline is changed. This study divided all states in two categories: winners and losers. Losers include all 10 states whose population share has declined from 1971 to 2011. They include all the southern states and Odisha, West Bengal, Punjab, Assam, Himachal Pradesh and Goa. On the other hand, the winners are Uttar Pradesh (will gain the highest), Rajasthan, Bihar, Madhya Pradesh and Haryana. It shows that many economically underprivileged states like Odisha, West Bengal and Assam would be left with less financial resources while relatively prosperous states like Maharashtra and Gujarat will further gain.

However, there are voices of support to the change. M Govinda Rao, Director, National Institute of Public Finance and Policy and former member of the Economic Advisory Council to the Prime Minister, says, “Transfers to states by way of tax devolution and grants are meant to enable these states to provide public services to current population. Even using 2011 population is inaccurate; it should be present population.” Though, he adds that people drafting the TOR for the Commission see tax devolution as a charity. “The TOR asks to use performance indicators for the states while forgetting the same for the Union government. These terms go against the constitutional values and also against the spirit of federalism.”

Even the earlier Finance Commissions raised uncomfortable questions over this rigid baseline condition. Rao says that the 13th Finance Commission expressed its frustration and said, “We are bound by our TOR to take into account population figures for the states based on the 1971 Census.”

Pronab Sen, Programme Director at International Growth Centre, says this change did not necessarily mean financial loss for the 10 states that experienced a decline in population from 1971 to 2011.

(This article was first published in the 1-15th july issue of Down To Earth under the headline 'Economics of population').