How India remains poor: As many as 22 states have become poorer

With every fifth Indian still below the poverty line, the country needs to take huge strides to alleviate poverty. For most states, though, it did not seem the priority, going by the poverty score card in the SDG Index 2019-20 released by the NITI Aayog just before 2019 ended.

The index is aimed at measuring performance vis-a-vis the United Nations-mandated Sustainable Development Goals. The latest edition made it clear that India is far from the first goal — no poverty by 2030.

India’s overall score of 50 (out of 100) in this respect was, in fact, lower than 54 in the past year. The decline was across states, except two — Andhra Pradesh and Sikkim.

Arunachal Pradesh plummeted the most — 18 points — while Bihar and Odisha slipped by 12 points each. Goa and Jharkhand declined by nine points. 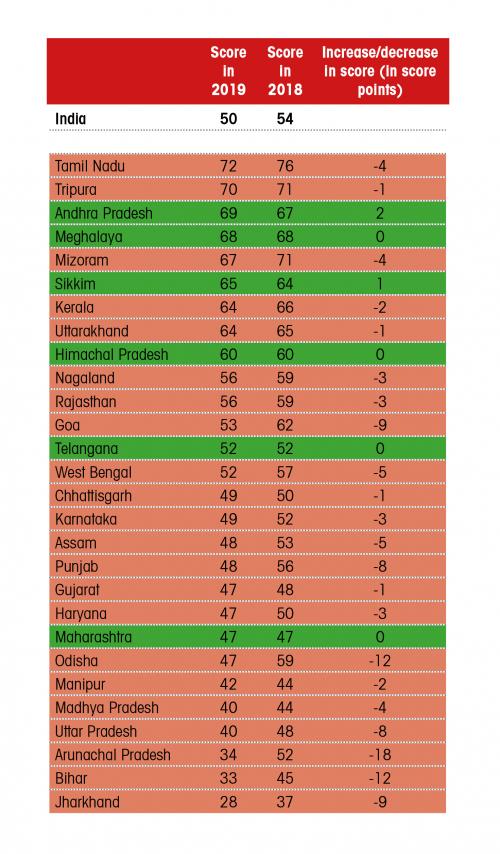 None of the states were on track towards zero-poverty by 2030. According to the index, a state with an overall score of 99 or above (out of 100) is an achiever. No state was even close.

Tamil Nadu, with a score of 72, and Tripura (70) topped the charts, but they too have slipped by four points and one over a year.

The performance Meghalaya, Himachal Pradesh, Telangana and Maharashtra remained stagnant at various spots. Maharashtra, one of the biggest states, continued to remain a laggard with a score of 47.

The score card factored in:

With 21 per cent of the population below poverty line, India’s target was to bring it down to 10.95. But only six states seems set for that. Goa has the lowest poverty rate of 5.09 per cent.

The remaining 24 were far from the target. Chhattisgarh was the poorest, with nearly 40 per cent of the population living below the national poverty line, followed by Jharkhand (37 per cent)

Much of the poverty was concentrated in rural areas and low-income states.

According to the report, only 36.4 per cent of eligible beneficiaries received maternity benefits. Full coverage by 2030  — now only a decade away — is the target, which no state has achieved till date.

Odisha’s had the highest coverage at 72.6 per cent of eligible beneficiaries.

Housing also came up as a concern in the report, with 4.2 per cent of the rural and urban households still in kutcha houses — non-durable and temporary.

But 21 states were yet to move fast in the direction. The highest percentage of households living in kutcha houses was in Arunachal Pradesh (29 per cent), followed by Odisha (14.2 per cent)