As india witnesses its largest movement of workers, Down To Earth’s Vivek Mishra walks with them for over 500 km, chronicling the crisis. This is the first of a two-part report 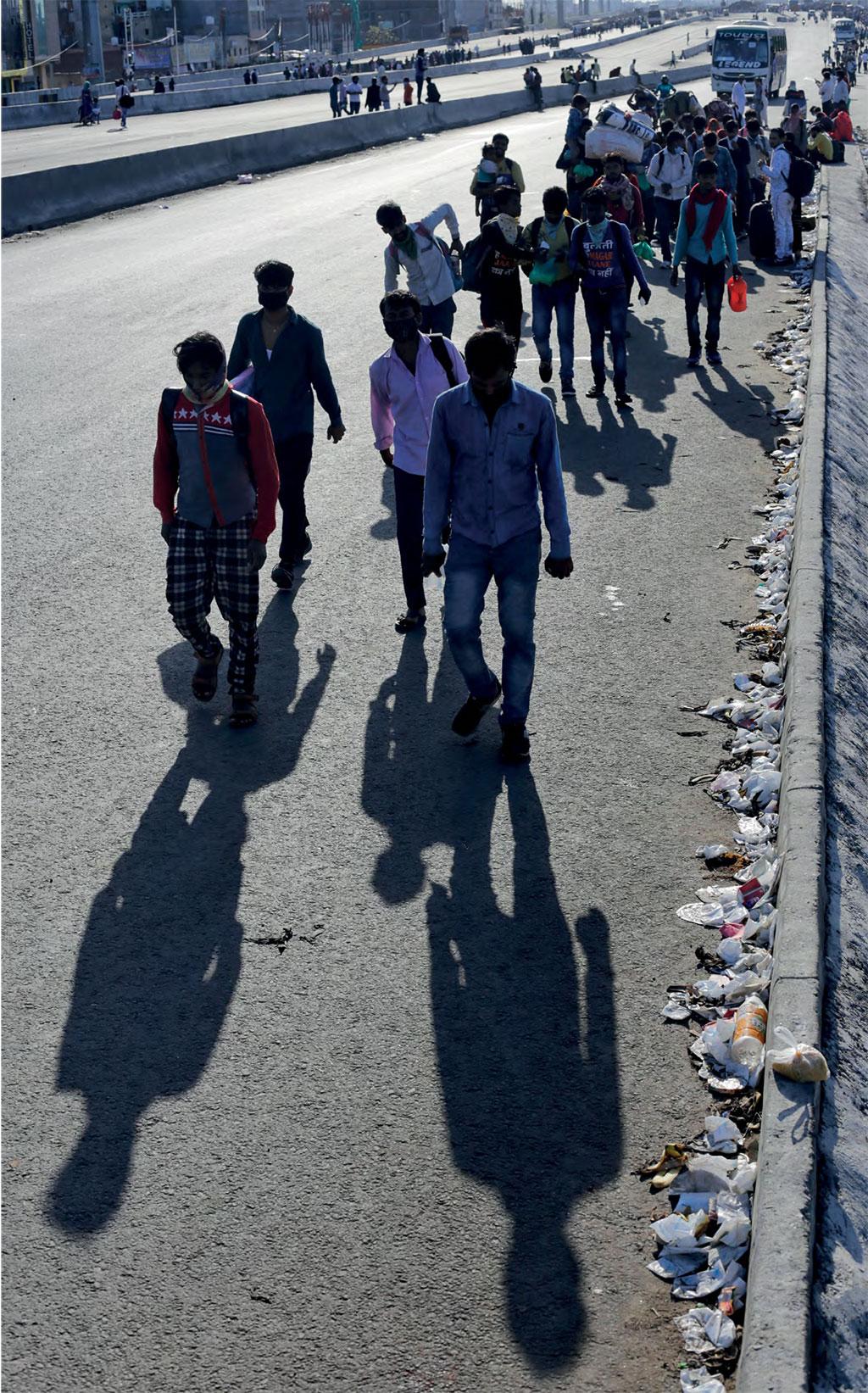 India has about 100 million migrants who have lost jobs due to the lockdown (Photograph: Vikas Choudhary)

Horrified with the stories of workers walking thousands of kilometres to their homes, it occurred to me that the best way to document their hardship was to join them and see it for myself. I started on May 16 without a destination in mind. A friend had told me that a large number of people were on the Delhi-Ghaziabad-Amroha road; so I decided to take that route.

As I filed this report on May 21, I was about 100 km from Bahraich, a district in eastern Uttar Pradesh, roughly 600 km from Delhi.

11 am: I left home in Mayur Vihar for the Anand Vihar Interstate Bus Terminus near Ghaziabad in the hope of finding people headed in the direction I had chosen. Close to the bus station, I saw a middle-aged worker and thought of striking up a conversation: “Kya kaam karte hain (What do you do)?” I asked.

He responded in a disinterested and irritated manner. “Welder kaa kaam karte hain (I am a welder).”

Kahaan rahte hain (Where is home)?” I posed a second question.

“To achaanak se chal diye (Why did you depart suddenly)?” I said.

“Arrey khaayenge kya? Na paise hain, na ration (What do I eat? I’ve no money, no food),” he snapped.

I reached Anand Vihar around noon, tried to cross over to Uttar Pradesh via the Ghaziabad border, which was sealed and where migrants were being herded around by the police, sometimes using lathis, to nowhere. I met Vinod Kumar, who was headed towards Bahraich, with his 11-year-old brother-in-law.

The child was carrying luggage that weighed more than him. Vinod, even more. We took several detours, walked through a crematorium and along a canal, to avoid the police to enter Uttar Pradesh via the Ghaziabad overbridge at around 6 pm. “Ab kabhi waapas nahin lautunga (I will not return),” Vinod remarked.

He had been in Delhi for 15 years, working at a sock factory that was now shut. “I have land. I will farm in my village,” he said.

We moved ahead and saw about 70 migrants at a police checkpoint. The police stopped us too and put Vinod, along with the other migrants, on a bus to return to Delhi. All his day’s walk gone waste. I too couldn’t do anything. Being a reporter, I was allowed to leave. I continued moving with a group headed to Banda.

9 pm: After having walked about 30 km in the day, we reached Lal Kuan (see ‘The route’). The group decided to spend the night there, but I along with three others took the highway, crossed Hapur and stopped at one Haryana Dhaba around 4 in the morning. I wanted to sleep but could not as I had to guard my mobile phone while charging it. Still, I could rest for a couple of hours.

9 am: I left for Amroha district and must have walked about 10 km when I learnt that thousands of migrants can be seen near one Baba-Mama Yadav Dhaba in Hapur. I returned and found that the administration was arranging for buses to send them to Uttar Pradesh and Bihar.

From there, I moved towards Brij Ghat, another location where I had heard migrants were stranded. I reached Brij Ghat around 10 pm and found that the police had barricaded the route and the migrants were told they would be taken ahead in buses.

But there was no arrangement for their stay. They were just asked to stay put on an open ground that had concrete surface. I stayed the night to talk to them and heard unbelievable stories of hardships.

I saw a woman trying to arrange milk for her month-old baby; two men making the journey with their families in their cycle-rickshaws; and a group that had been duped of Rs 17,000 by a driver.

2 pm: My interactions with the people at Brij Ghat the previous day had made the police suspicious. I was also asking officials to help out migrants. To get rid of me, the police made me take a bus to Shahjahanpur.

On the bus, I met Brij Kishore and Jagdish, brothers travelling from Panipat with their families and relatives — a group of eight. Both worked as dailywage labourers. I asked if I could accompany them to their village. I wanted to see how the village was treating its migrants. They agreed.

8 pm: The bus dropped us at Sadar in Shahjahanpur where a cousin was waiting. Our group had two children who left for the village, Ratanpur Kunda, with the cousin on his motorcycle. We were told by officials at the bus station to collect the ration being provided by the government at the quarantine centre at Punaya, about 22 km from Sadar and about 5 km from our village.

Completely drained out but without option, we walked to Punaya. The family received five kits of wheat, rice, pulses, potato, refined oil and spices, each kit weighing about 40 kg. Since they were too heavy to be carried, we arranged for an ambulance to drop them home, while we walked.

11:30 pm: Reached Ratanpur Kunda. There was no electricity. As Jagdish’s wife unlocked the house, their relatives from adjacent houses came out.

Over 40 members of the family live in the village. Among them was their uncle Ram Bharose, the eldest member, who said he was glad they had all made it back. There was no overt display of emotion.

Noticing a stranger in their midst, one of the relatives addressed me: “To aap aaj yahin rahenge (You’ll stay here tonight).” It did not sound like a question.

This is the first article of a two-part series. Read the second part here