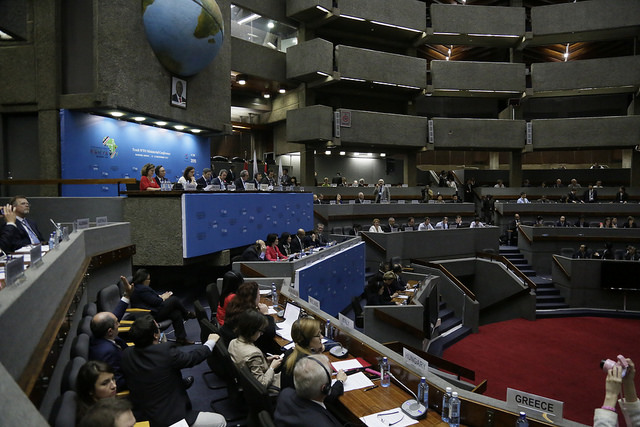 Negotiations continued till late night on Thursday at the tenth Minister Conference of the World Trade Organization (WTO) in Nairobi. India, along with other countries of the G-33 was trying to push for some key development issues to be included in the draft ministerial text on agriculture.

One of India’s key concern is regulation of public food stockpiles, crucial to the country’s food security and food distribution system.  Nirmala Sitharaman, Minister of State (Independent Charge) for Commerce and Industry of India, said, “The G-33 has strongly argued the case for an effective special safeguard mechanism for developing countries and for changing the rules relating to public stockholding for food security purposes.” The minister was also unhappy with the language used in the draft to address the topic.

Sitharaman marked that Doha round of negotiations should be concluded. “It is regrettable that longstanding issues of interest to a large number of developing countries are being put aside for the future and new issues of recent vintage are being taken up with unusual enthusiasm,” she said referring to Export Competition talks that have gained mileage at the conference.

She added, “It is our duty to safeguard the legitimate interests of poor farmers and the food security of hundreds of millions in developing countries. We cannot continue with the rhetoric of a development agenda without even a reasonable attempt to address issues which are of primary concern to developing economies.”

The conference that commenced on December 15 and will end on December 18 also witnessed other major negotiations. Fifty-three countries have agreed upon a trillion dollar Information Technology (IT) trade deal and some members have added their agreement to the Trade Facilitation Agreement (TFA).

Members representing major exporters of information technology products agreed on the timetable for implementing a landmark deal to eliminate tariffs on 201 IT products valued at over $1.3 trillion per year.

WTO Director General Roberto Azevêdo, said about the deal, “Annual trade in these 201 products accounts for approximately 10% of total global trade. Eliminating tariffs on trade of this magnitude will support lower prices — including in many other sectors that use IT products as inputs — it will create jobs and it will help to boost GDP growth around the world.”

The Trade Facilitation Agreement (TFA) that was concluded at WTO’s 2013 Bali Ministerial Conference received six additional ratifications. This brings the number of total member countries that have formally accepted the agreement, to 63.

TFA is a trade protocol that aims to expedite the movement, release and clearance of goods between countries. It further contains provisions for technical assistance and capacity building in this area.

The TFA will enter into force once two-thirds of the WTO membership has formally accepted it.  India has still not signed the agreement due to concerns about food security