The US, the EU and other developed countries are expected to make a concerted push for new issues

By Timothy A Wise, Biraj Patnaik 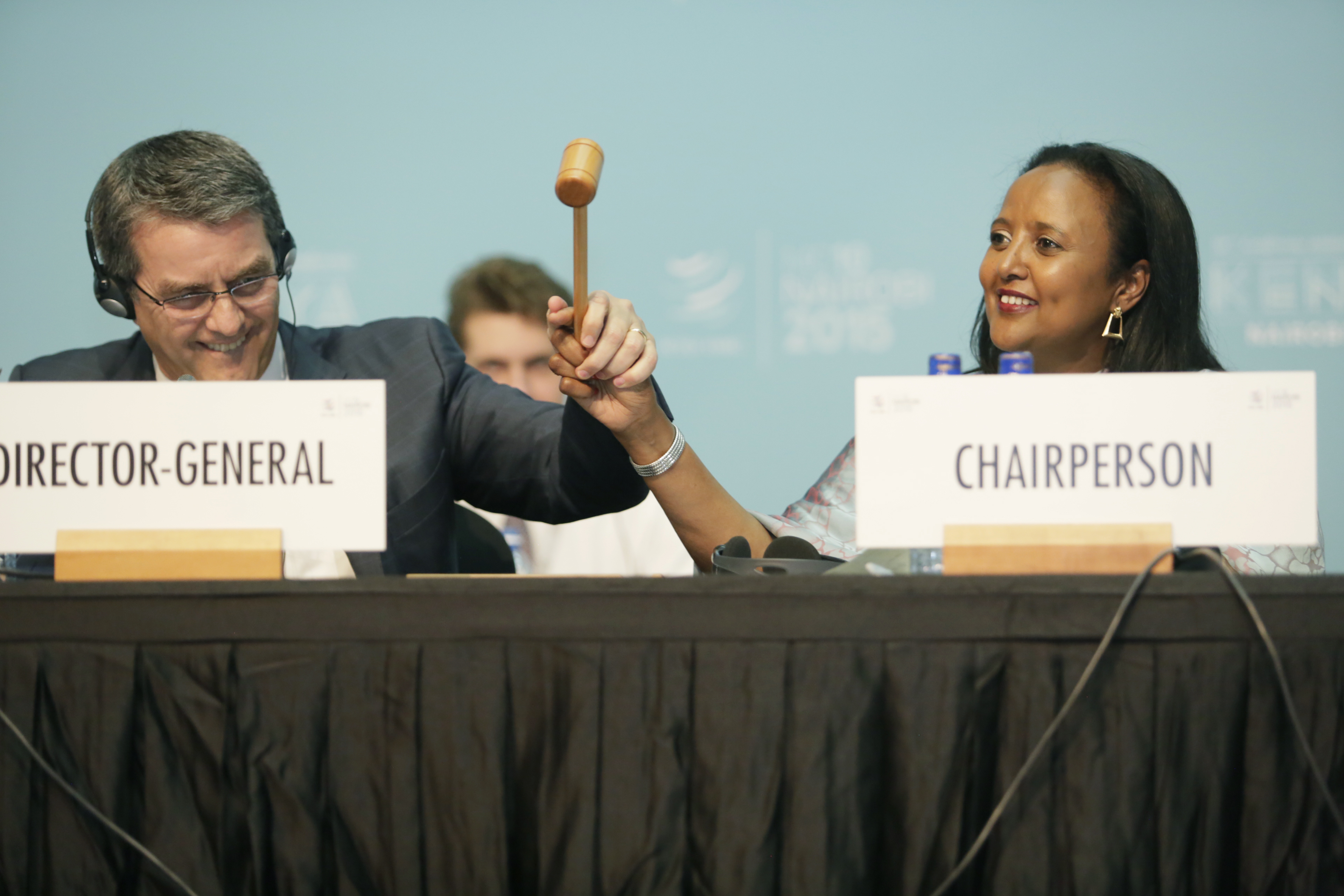 Director General Roberto Azevedo and Chair of the Tenth Ministerial Conference, Amina Mohamed, mark the conclusion of the WTO conference, which resulted in the adoption of the Â“Nairobi PackageÂ” Credit:WTO

In a self-congratulatory tone, lawyer and politician Amina Mohamed (who also served as the Chair of the Tenth WTO Ministerial Conference) called the recently-concluded World Trade Organization’s (WTO) negotiations “a turning point for world trade”. In her opinion piece in The Daily Nation she wrote that the international trade body “is now pointed in the right direction”.

With the general council of the WTO meeting Wednesday for the first time after the Nairobi Ministerial, most observers expect a stormy session with the developing countries likely to take on Director General Roberto Azevedo for his non-transparent role by which the Nairobi Ministerial Declaration (NMD) was drawn up.

The fate of the Doha Development Round (DDR) and the Doha issues now hangs in balance with the US, the EU and other developed countries expected to make a concerted push for new issues and a new architecture in view of the NMD.

Sadly, Mohamed’s apology echoes the triumphalist interpretation of the US negotiators, who claim they have effectively killed the DDR.

Unfortunately, Mohamed did not lead the WTO’s first African ministerial in the right direction on development issues so urgently needed by the countries in the continent. She turned the institution back to the time when rich countries set the agenda and wrote the agreements.

Let’s examine her claims to success.

First, she asserts that Nairobi achieved an “…outlawing of export subsides in developed and developing countries by 2018 and 2023 respectively…”

This is just a pyrrhic victory for developing countries and not a game-changer, let alone a “valuable leveling of the playing field”, as Mohamed added.

Perhaps the most egregious misreporting of the Nairobi outcomes was that the ministers had agreed to end agricultural subsidies.

Mohamed feeds the misperception by ignoring that domestic agricultural subsidies, which are by far the most trade-distorting, were not even allowed on the table by the rich countries. In fact, they are at the core of the Doha agenda that was actively resisted by the US and others.

The same misrepresentation sits behind her second assertion regarding the contentious issue of cotton. Mohamed writes that the ministers, “…decided on the prohibition of export subsidies immediately by the developed countries.”

This is not significant. Far more important are domestic subsidies, especially those provided by the US.

Recent studies have shown that the 2014 US Farm Bill, far from eliminating trade distortion in cotton, will continue it, raising the US cotton exports to 29 per cent above their reasonable market levels and suppressing global prices by 7 per cent.

That will cost the world’s other cotton producers an estimated $ 3.3 billion per year in lost revenues. Most important, Africa’s long-suffering C-4 cotton producers are projected to lose $ 80 million a year. The Nairobi outcomes left those damaging programmes intact, untouched, and, in fact, not even discussed them.

The third assertion is that Mohamed states that the Nairobi package, “…reaffirmed the Bali decision on public stockholding for food security purposes….” This is technically correct, but she fails to note that the developing countries, including India, were pushing for a permanent solution on the public stockholding issue. Non-resolution of this, two years after Bali, in fact betrays the promises made there and subsequently in Geneva.

Reaffirming the “peace clause” on the existing programmes is hardly an advance for an issue of such concern for so many developing countries.

Then comes the Information Technology agreement, which is a plurilateral agreement, but even the host, Kenya, was not a signatory to it.

Surely if this was such a great deal for the developing countries, Mohamed could have easily prevailed on her own government to get on board. But truth be told, elimination of tariffs on IT products has limited benefits for African and most other developing countries. It may lower the consumer cost of some IT products, but will also eliminate needed tariff revenues.

In any case, the main beneficiaries will be the more developed countries which manufacture IT products.

Another achievement touted by Mohamed is the LDC (least developed countries) package and the extension of “duty-free, quota-free” access of LDC products to rich countries.

Any celebration by the LDCs on that count, without looking at the exempted tariff lines, would be premature. In reality, most key products, such as textiles remain excluded, so close to 90 per cent of the goods exported by LDCs will not be covered by the deal.

Undermining the Doha round

The most enduring myth that Mohamed seeks to create about the Nairobi ministerial is also the most dangerous. She claims that the continuity of the Doha Round mandate has been adequately addressed to by the agreement’s acknowledgment of “polar positions” on the issue.

By this Mohamed adds insult to injury. The fact is that for the first time the consensual nature of the WTO decision-making process—one country, one vote—has been cast aside to allow a few rich countries to undermine the Doha Round in Nairobi.

She claims that no new issues can supplant the remaining Doha issues without the agreement of all members, but those members now know that any further discussion of, say the US cotton subsidies, will be conditioned on their willingness to negotiate on investment or one of the other “new issues” so central to the rich country’s agenda.

Developing countries will now have an uphill task to negotiate in Geneva without the set of principles and the framework that the Doha Round provided.

Nairobi may well go down in history as the graveyard of development issues in the WTO, and Mohamed as the chairperson of the ministerial can scarcely avoid her responsibility as the undertaker of this endeavour.

India, on the other hand, has a chance to redeem itself in the General Council meeting by standing up to the developed countries, having initially buckled under pressure to developed nations in Nairobi.

This time it has less credibility having acquiesced to the non-transparency at the ministerial by joining the small group of five countries, which ultimately scripted the downfall of the DDR.