Electricity grid to get smart 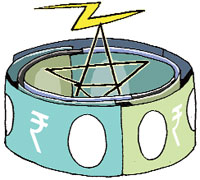 To reduce electricity losses due to outdated technology and theft, the power ministry has sanctioned more than Rs 10,000 crore to modernise grids.

Power utilities in 1,400 towns will use the funds to install sophisticated electric meters that constantly monitor an individual’s power consumption; the utilities will also undertake energy audits to ensure zero electricity theft. The towns, located across India, were chosen under the Restructured Accelerated Power Development and Reforms Programme (RAPDRP).

In August 2008, the power ministry launched RAPDRP that suggested power utilities in states use information technology (https://www.downtoearth.org.in/node/2004) to control theft. “Theft is the prime reason 30 per cent of electricity is lost during transmission and distribution in India. By using advanced meters and other checks in electricity grids, the losses could be brought down to 15 per cent,” said Kapil Mohan, former director of power ministry, who played a key role in implementing the reform programme.

“Other than reducing the aggregated technical and commercial (AT&C) losses to the minimum level of 15 per cent, electronic payment of electricity bills and online consumer grievances redressal are some of the new system’s highlights.

The complete distribution network of each town could be managed from a central control room after the grid’s modernisation,” he added.

The first part of the reform programme is installing information technology systems in the selected towns as a pilot project to assess the performance of automated grids. The thrust of the second part of the programme is on reducing AT&C losses. According to Tanushree Bhowmik, who has been associated with the programme as project director in energy and environment division of the United Nations Development Programme, the highlight of RAPDRP is its grant structure.

“The programme makes sure that investment in upgrading grids yields results. It is an outcome-driven programme based on targets that can be monitored,” she said. The loans by the Central government for the proposals from distribution firms will be converted into grants upon installation of required systems in the first phase and in reducing AT&C losses. If the firm is unable to reduce losses, the funds will remain loans.
News News News Power Transmission Ministry of Power Energy Efficiency Energy Efficiency Energy Electricity Bureau Of Indian … Air Pollution US News Briefs
SUPPORT US