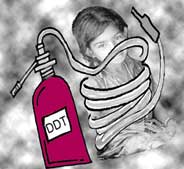 children exposed to ddt (dichlorodiphenyl-trichloroethane) attain puberty at a much younger age, reveals a new study. The study shows that girls exposed to ddt develop breasts and start their menstruation cycle by the age of ten, both processes which generally start at the age of 12. The study carried out under the guidance of J P Bourguignon, researcher at the department of pediatrics, University of Liege, Belgium, found that most of the patients were immigrants (or children of immigrants) from the developing countries.

Out of the 145 patients who were treated upon for precocious puberty by the researchers during a nine-year period, 40 of them (28 per cent) appeared to be children who had migrated from 22 different developing countries like India and Cambodia. These children had been living in Belgium for around five years and 39 of them were girls. Screening the blood plasma of children for eight pesticides showed the presence of oestrogenic endocrine disrupters, such as p,p'- dde (dichlorodiphenyltrichloroethylene), a derivative of ddt . Other pesticides that were found in the children's blood were lindane, aldrin, endrin and heptachlor. ddt is used in developing countries to control malaria and for plant protection. While the immigrant children had an average 1.12 ng/ml of dde , most of the Belgian girls showing precocious puberty (13 out of 15) had undetectable concentrations (<0.1 ng/ml)="" of="" the="">

This effect is generally masked in the native countries as the children tend to be undernourished and this slows down their development, says Bourguignon. Such an effect has also been observed in children who have migrated to other European countries and is generally attributed to the better food available to the children. But this is not the only reason as some of the children are healthy when they arrive. According to Bourguignon, this suggests that the change in environment is responsible for this to an extent. As the children do not come from any specific country or area, the role of genes is not very evident. According to him the reason why healthy children do not show early puberty in their native country is that they are under continuous exposure to the chemicals that have both a stimulatory and inhibitory action on the brain with the inhibitory effect being much stronger. When the chemical is removed from the environment, the children are left only with the previous stimulation, which initiates puberty. There have been cases that prenatal exposure to the endocrine disrupters has brought about precocious puberty. Bourguignon fears that even if the effect on puberty is masked, the reproductive systems would still be harmed. There is concern about other pesticide effects, for example hormone-sensitive cancers such as breast cancer, he says.

"The results certainly suggest an environmental factor," says Stuart Milligan, endocrinologist, King's College, uk . But he says more studies are needed to confirm a link with pesticides. "It's dangerous to create a scare story from something that's not proven," he says. This study indicates a possible relationship between exposure to endocrine disrupters and sexual precocity and deserves further studies in immigrant children.