How plants survive during night 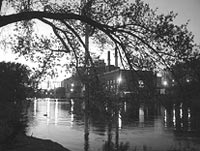 a recent development may be termed as one of the biggest scientific discoveries. Scientists from the Norwich-based John Innes Centre (jis) have found out how plants sustain themselves during nighttime. The process of photosynthesis, during which plants use the energy from sunlight to power the production of food (sugar) from carbon dioxide and water, is well understood. But scientists have always been baffled about what happens when the sun goes down.

They know that along with making sugar from carbon dioxide, the plants also make starch during photosynthesis. This is stored in the leaf. At night, when the plant requires food, the starch is broken down to make sugar. This maintains the supply of energy, thereby allowing the plant to survive during the hours of darkness. The jis scientists have nailed down the mechanism that converts the millions of tonnes of starch into sugar night after night. While studying the weed Arabidopsis thaliana, the scientists discovered a mutation in the plant gene mex-1, which results in starch breakdown and sucrose synthesis. Subsequent analysis showed that this gene also encodes a protein that helps in the transportation of the sugar to various plant parts.

The discovery is of enormous significance for agriculturalists. Understanding how the sugar is formed during nighttime will enable plant breeders to develop crops in which the pattern remains completely undisturbed. Conversion of starch into sugar also plays a great role in deciding the sweetness, taste, quality and storage characteristics of many fruits.