Vietnam signed a free trade deal with the European Union (EU) on June 8, 2020, which is expected to help increase the country’s gross domestic product by 4.6 per cent and its exports to the EU by 42.7 per cent by 2025.

Vietnam will conservatively require 15-20 terra-watt hour (TWh) — or 4-6 per cent of Vietnam’s overall electricity demand in 2025 — if similar usage rates are projected to support export outputs to the EU, according to Centre for Science and Environment, a Delhi-based research think-tank.

To achieve this, clean electricity supply would be essential.

The country, however, is reeling under shortage of electricity. Last month, Prime Minister Nguyen Xuan Phuc, according to local media reports, called all parts of society to reduce power consumption to save at least two per cent annually.

The state departments will be required to conserve at least five per cent electricity per annum to make energy efficiency a basic guideline for annual employee appraisal to bonuses. They will install solar panels on rooftops. Organisations and persons running street lamps, commercial signage lighting programme and outdoor decoration will save 20 per cent electricity.

Restaurants, hotels, industrial facilities, office towers and apartment buildings will have to slash their exterior lighting power by half in the evening, depending on the schedules provided by the local electricity utility.

Families are required to use electricity thriftily, have to switch off all electrical devices when leaving a room; use air conditioners only when necessary; unplug electrical equipment not in use; limit the use of equipment consuming large amounts of power; and install rooftop systems where ever possible.

The government has warned that it will be a struggle to ensure adequate electricity supply for the next five years. It has also set plans to import more electricity from Laos to meet existing deficits.

Harvard University released a comprehensive report in December 2018 about inefficiency of electricity consumption in Vietnam and warned of significant impacts on its energy policy choices. Vietnam consumes almost twice the energy per growth unit relative to its neighbours, the study stated.

It vigorously relies on coal due to the high internal taxation policy on natural gas. The report also pointed out that renewable energy prices in Vietnam were high compared to neighbouring countries, mainly due to high land / property values.

Nguyễn Mạnh Cường, an official from the Institute of Energy’s Department of Electrical System Development under the Ministry of Industry and Trade, said “The deadline for completing the power development Master Plan 8 is June 2020. Master Plans 6 and 7, including the amended one, still rely heavily on traditional power sources such as hydropower, thermal power and gas turbines.

The new master plan will be the electricity plan of the renewable energy era.”

Though efforts are underway to increase the use of renewables and other clean fuels for power generation, coal-based power plants remain a major chunk of the planned capacity to fulfil its energy aspirations. 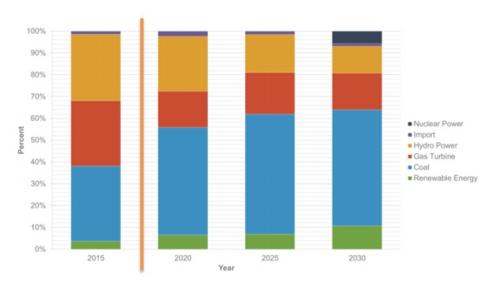 However the current pollution norms for coal power norms remain inadequate. Loose norms could be an added health risk to its citizens. According to a World Bank report, “Today, 70 per cent of the population is under 35 years of age, with a life expectancy of 76 years, the highest among countries in the region at similar income levels.”

However, with extensive expansion to build coal power plants with least pollution control facility, the life expectancy and health of its population is at risk.