Fall of the black diamond 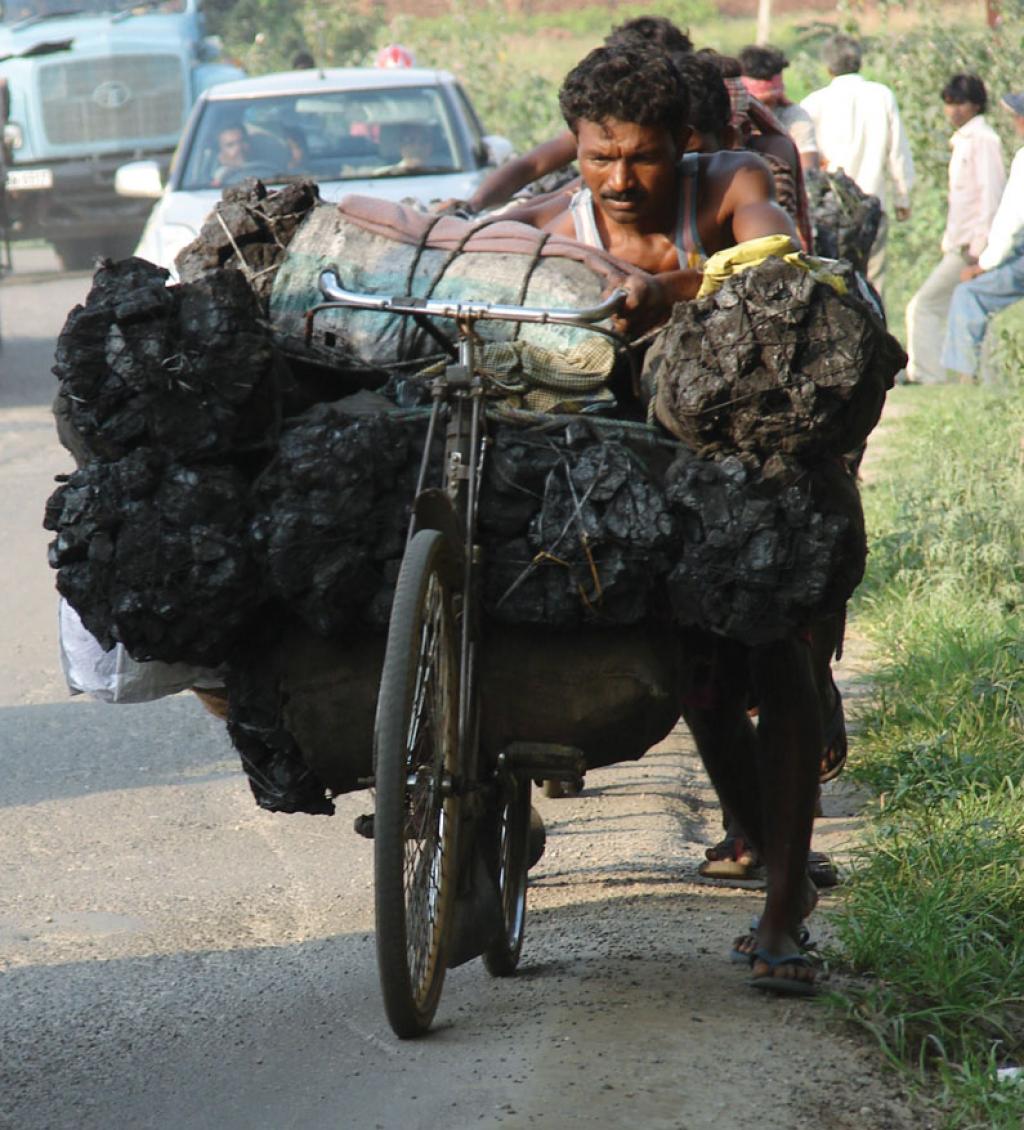 KING COAL appears to be in trouble—at least in the US. On April 13, Peabody, the largest privately held coal miner in the US filed for bankruptcy. Peabody’s filing follows bankruptcies of some of the largest coal miners in the US, including Arch Coal and Alpha Natural Resources—these firms are among the four largest in the US with around 40 per cent of the total US capacity. Peabody’s travails have followed a well-known storyline—the rise and fall in the global commodities markets with China’s demand. But they also highlight issues which may have cautionary lessons for India’s coal mining sector as well as its electricity generating companies.

India has embarked on an ambitious plan to increase domestic coal production to enhance energy security and support increase in electricity generation. Indeed, the power minister recently announced its intentions to eliminate coal imports by 2017-18, except by power plants based on high-calorific value coal and by steel plants that require metallurgical coal. The second goal is 24x7 power for all, which can be met only by a sharp increase in coal-based electricity generation. Coal India Limited (CIL) targets increasing coal production to 1 billion tonnes by 2020, up from 536 million tonnes in 2015-16, to meet these goals.

But the turbulence in the global coal markets suggests that the strategy to rapidly increase coal production and thermal electricity capacity needs to be carefully assessed. By March 2016, the stockpile at CIL climbed to 48 million tonnes. An additional 26 million tonnes was stored in power plants, the highest in three years, translating to 28 days of average inventory. Meanwhile, the coal-based power capacity surged to 185 gigawatts (GW) by March 2016, a 22 GW increase in last year alone. Despite electricity demand growing at a healthy rate of 7.4 per cent during 2015-16, the plant load factor (PLF), or capacity utilisation, for the coal-based power sector was less than 65 per cent in March 2016—a sizeable portion of the thermal power sector is distressed due to low PLF.

Further increase in thermal power capacity—almost 70 GW is in pipeline—and of renewables may result in continued pressure on thermal power plant PLFs, which in turn will financially strain them. The outlined scenario is not just a short-term problem; if India’s integrated energy policy is not carefully thought through, there is a danger that significant investments that are planned in coal production and power generation may be stranded.

The sustained decline of the US coal market started in the mid-2000s, driven largely by the shale gas revolution. Tighter environmental standards made matters worse for coal power plants—hundreds shut down as a result. By 2015, demand for coal from the power sector had fallen to 739 million short tonnes (MM st), a 29 per cent fall from the peak of 1,045 MM st in 2007 (see ‘US coal market runs out of steam’). The US Energy Information Administration predicts that gas will overtake coal as the leading fuel for electricity generation in 2016. 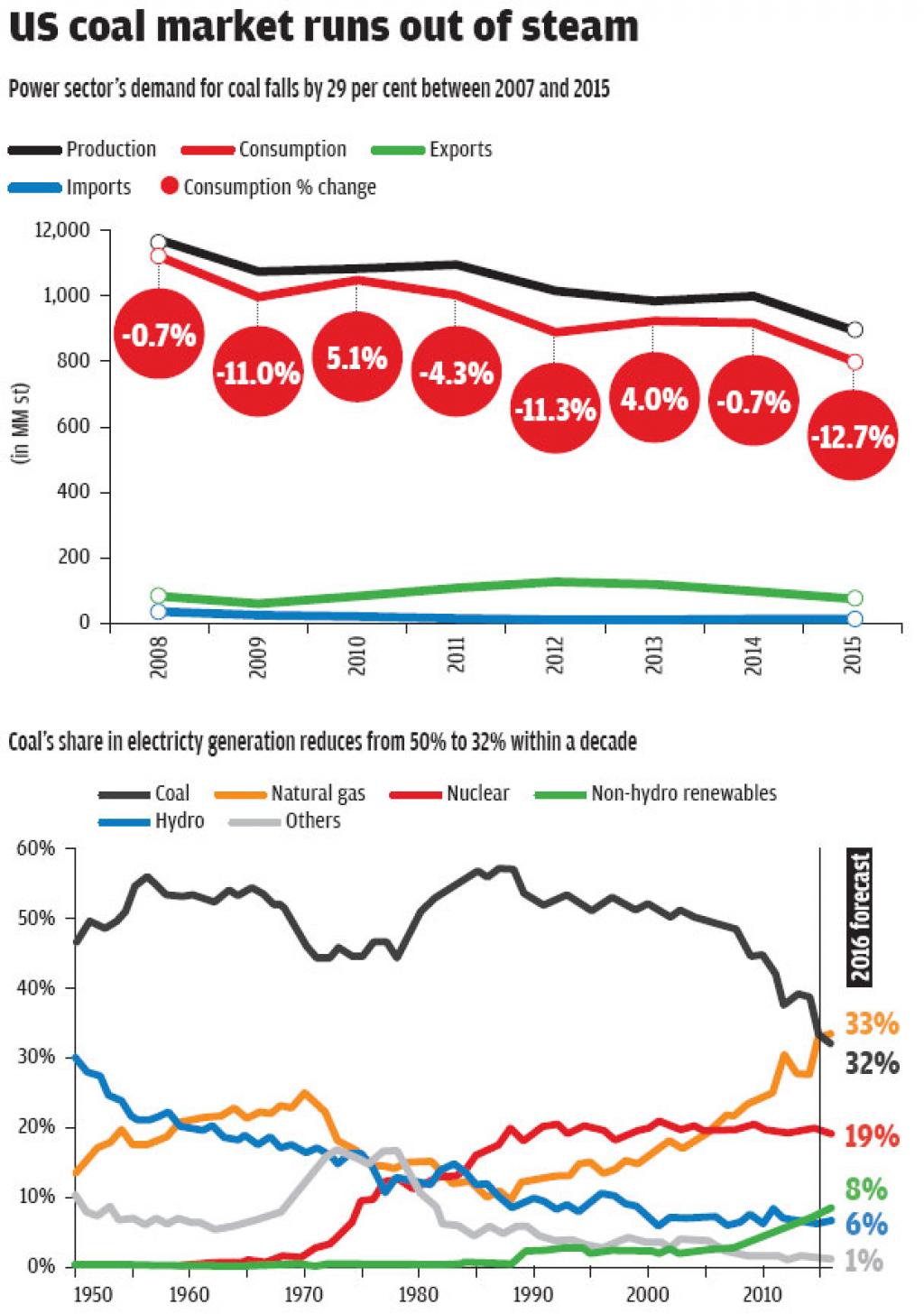 Coal companies tried to stanch this bleeding by doubling down. They made a bet that demand from China and India would continue to grow. Peabody and others took on huge debt to purchase mining assets in Australia and elsewhere, especially mines producing higher-calorific value metallurgical coal.

The strategy proved to be spectacularly wrong—around the same time when the US companies were busy buying coal mines, Chinese commodities’ demand started to cool off as its economy slowed. China also started making attempts to tamp down growth driven by investments and substituting it with increased consumption. Declines in China’s key industrial sectors such as power, cement and steel, and coal demand followed suit. Simulta-neously, local air pollution problems and international climate change concerns have forced China to act. In March 2016, China’s National Energy Administration announced steps that may halt the construction of around 200 power plants with a total capacity of 105 GW, The New York Times reported. At the same time, in India, the government made a push to increase domestic production to reduce reliance on imports. During 2015-16, Indian imports declined as CIL production, responsible for 80 per cent of the domestic supply, increased to 535 million tonnes.

As the demand for coal fell in both India and China, the international coal prices sank leaving in its wake a string of bankruptcies of US companies. (See ‘Mayhem in the global coal market’).

What it means for India

For India, lower coal prices may bring minimal benefits since it plans to import as little coal as possible. Negative consequences are likely. Under pressure from climate change activists in the US and Europe, some investors such as Calpers, and Norway’s sovereign fund have decided to exit from fossil-fuel investments. Global equity markets are already skittish about coal. In the recent past, large commercial banks, including JP Morgan, Citibank, Morgan Stanely and Bank of America have announced they will cut back on financing coal—as of now this would impact developed markets but the signs are ominous for emerging markets too. 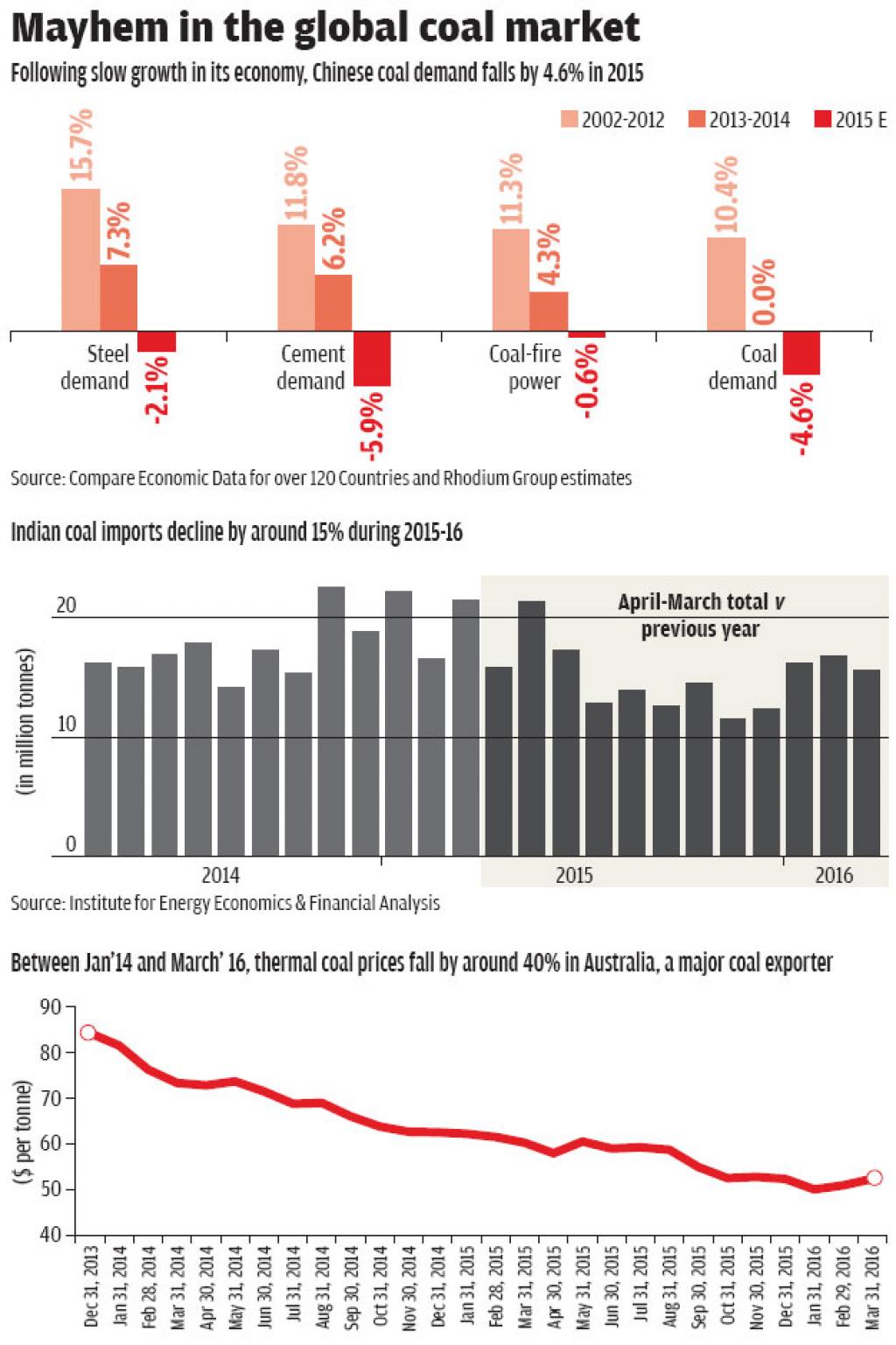 Another issue is that India’s goal to have 175 GW renewable capacity by 2021 and Intended Nationally Determined Contributions targets do not seem to have been factored into its coal production. It is also unclear how much additional thermal power capacity is needed over the next 5-10 years. Since a significant share of the existing capacity is financially stressed, it is no surprise that private sector players are reluctant to start new projects. Private sector contributed almost two-thirds of thermal capacity installed during the Twelfth Five Year Plan and was expected to play a dominant role going forward. Thus, a clear and credible energy roadmap is essential to encourage continued domestic financing for the thermal power sector.

Third, the government recently announced tighter emission standards for coal-based power plants. Investment in pollution abatement technology would impact tariffs and would make renewables more competitive. Also, it may be economically advantageous to shutter capacity which is past its useful life (typically 25 years) rather than invest in pollution control. These outcomes will influence new thermal capacity requirement.

Finally, the generating sector can be put on a sound growth path when the distribution companies are stabilised. The Central Electricity Authority’s latest electricity generation and demand figures show peak power and energy deficits of 1.5 per cent and 1.7 per cent, respectively in March 2016. The healthy headline numbers hide the obvious fact—the end user demand is far higher but is choked by the discoms’ inability to purchase power.

India’s energy policy needs to address all these issues to right size both coal mining and the coal-based power sector.