From Petro to Electro: How prepared is India to ride the energy transition wave?

An electro-economy is an inevitable reality. The quicker India prepares for this change, the bigger will be the economic spin off, along with low carbon and health benefits 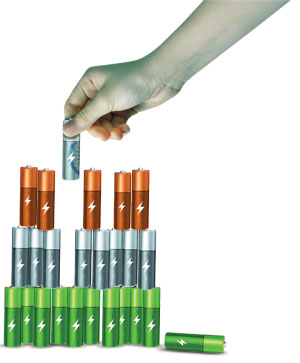 This is the third section of a five-part series. Read the second part here

India aims to generate 40 per cent of its energy from renewable sources by 2030 and become a 30-40 per cent electric vehicle (EV) nation. The target gives one the impression that India is well poised for energy transition. Is it?

“If there is not an adequate supply of domestic advance[d] batteries, India will simply go from being an oil-dependent country to a cell-dependent one,” wrote Aman Hans, Lead (Energy Storage Mission) with the NITI Aayog, in an article dated December 2020 on the government think tank’s website.

In 2019-20, India imported about Rs8,500 crore worth of Li-ion batteries. Same was the case in 2018-19. This is a six-fold rise from 2014-15. India almost entirely depends on global (especially Chinese) resources and technology for this energy transition. Recent tensions with China have made the country even more aware of this dependence.

Self-reliance and localisation are, therefore, high on national priority, but this needs firmer strategies. Already, the government has rolled out a subsidy and charging infrastructure-based incentive programme called Faster Adoption and Manufacturing of Electric Vehicles (FAME) in 2015.

As part of the post-pandemic economic recovery, it has announced Production Linked Incentive (PLI) scheme, under which Rs 18,000 crore have been allocated for developing EV battery chemistry and promoting investment in manufacturing.

Under PLI, manufacturers would be given a grace period of five years from notification of the scheme to ensure adequate localisation. While the first few years may see large-scale import of cell components, such as electrodes and electrolytes, higher value capture is likely in the years to follow.

PLI provides incentives between 2 and 12 per cent of the incremental sales revenue and between 4 and 7 per cent of incremental exports revenue. Incentives will be disbursed based on performance in the areas of cell manufacturing.

India is also setting targets for giga-scale battery storage factories. “We are working towards setting up battery storage potential of 50GWh to meet the requirements over the next few years,” Anil Srivastava, advisor, transport, NITI Aayog tells Down To Earth (DTE).

Localisation will require local component and battery development to customise to Indian conditions while reducing the cost of manufacturing, he says and the auto industry is in consultation with the government to suggest refinement to the scheme.

Though localisation has drawn policy attention, industry is waiting and watching. Sohinder Gill, director general, Society of Manufacturers of Electric Vehicles, registered association representing Indian makers of EV and EV components, says, “We need a strategy to ensure that 5-10 million quality vehicles come on the road with front-loaded incentive, where customers get immediate benefit on purchase, backed by a mandate and with support for initial adoption, including fleet renewal, based on EVs.”

Multiple state governments, too, have framed or are framing EV policies and offering capital subsidies to match those of the Union government to help build supply. Invest India, the national investment promotion and facilitation agency under the Department for Promotion of Industry and Internal Trade, Ministry of Commerce and Industry, provides information in this regard.

Gujarat has seen large-scale investments for Li-ion battery manufacturing and is offering subsidised utilities, while Telangana is earmarking land for manufacturing unit at a concessional rate. Andhra Pradesh has announced allocation of land for an electric mobility-focused industrial park and capital subsidies of 50 per cent on fixed capital investments in common infrastructure. Karnataka has focussed on R&D and interest-free loans for EV manufacturing.

Tamil Nadu is offering subsidised land and incentives. The first five giga-factories in Maharashtra will get capital subsidies on fixed capital investments and the state government will be an equity partner. Haryana, Punjab, Bihar, Uttar Pradesh and Rajasthan are working towards ecosystem required for the industry.

US-based car manufacturer Tesla is already in Bengaluru to import completely built-up units, but also has plans to start production. This may also bring battery partners Panasonic and LG Chem. Delhi, too, has a comprehensive EV policy.

“State level policy will play an impor tant role in promoting manufacturing which is needed for supply side strategies. We need phased manufacturing plan for scale and to localise production,” says Prashant K Banerjee, executive director of Society of Indian Automobile Manufacturers, a body that represents major vehicle and engine manufacturers in India.

The popularity of e-two-wheelers has a lot to do with their small batteries that are easier to charge at home and do not need public charging. The sheer numbers make e-two-wheelers the immediate candidate for ambitious electrification target.

Start-ups and non-conventional players in this segment are moving aggressively with innovative business models than the conventional players. Ather Energy Pvt Ltd, an Indian EV company, manufactures all components in-house except battery cells which it imports from China.

Integrated business model is a necessity in this segment. Ravneet Phokela, chief business officer, Ather Energy, says they have “taken the route of intertwined ecosystem to build an integrated platform to go beyond just assembling of vehicles”.

This includes battery management systems, motor, controllers, charging infrastructure and connected dashboard. “We had to build an integrated system since we could not lean on the local supply chain anyway,” says Phokela. With FAME-II (an extension of FAME-I launched in 2019, with focus on public transport) becoming more performance based, more innovation is likely.

The car industry is slower to respond, as the demand is low. But it is also looking at an ecosystem approach. The Maruti-Suzuki alliance is building supply chain and skills and also setting up battery manufacturing plant. Suzuki Motor Corp, along with Toshiba Corp and Denso Corp, is setting up a Li-ion battery manufacturing plant. But their electrification strategy is likely to be pushed to 2025. Mahindra started early and is building its product line.

In the bus segment, 55 per cent of the orders under FAME till 2019-20 are said to have been won by Indian industry that partnered with Chinese firms. The dependence on China is more due to the lower costs of materials in China. But the scenario is changing.

Tata Power, the leader in the sector, is setting up indigenous supply chain including batteries. Tesla Inc may tie up with Tata Power to set up charging infrastructure for EVs. Overall, in the four wheelers segment, lack of competition and a low fleet volume have dampened import substitution efforts so far.

Resource rush is on

It is reported that two-thirds of the minerals required to achieve the energy transition goals are already available in the country. For the rest, the government is signing up battery mineral sourcing agreements with Latin American countries and Australia.

“India needs to ramp up battery recycling to recover material. Almost 90 per cent of materials like lithium, cobalt, manganese and graphite can be mined from used batteries,” says Jhunjhunwala. Closing the loop will be critical.

While industry blames “not enough traction” to build consumer demand and infrastructure, consumers rue that there are not many quality products in the market. This “chicken and egg” syndrome can be dispelled only with policy mandates, targets and long-term policy commitments. Consumer awareness on e-models is low, hindering progress.

Global experience shows the government will have to be the prime mover to jump start the big change in industrial policy and consumer demand. FAME, PLI and state-level policies are steps forward but do not add up to achieve the required scale of change.

Entrenched in manufacturing of internal combustion engines, the auto industry is resistant to ambitious and urgent electrification targets, especially after recent investment in BS-VI emissions standards.

Global experience shows India needs targets for electrification, credit-based zero emissions mandate (including sales and purchase mandate), and a holistic industrial and trade policy to build the ecosystem for the massive change. When major global markets are aiming for 100 per cent electrification over the next two decades, can India remain insular?

But the Indian auto sector is weary of the zero emissions mandate. “Mandate for a vehicle manufacturer can be helpful to kickstart but cannot be sustained in the long run without more credible options for consumers. Forcing demand where there is no consumer value is a bad idea,” says Pokhela.

Officials at Maruti Suzuki say this mandate cannot be a yardstick. Anoop Bhat, executive vice-president; C V Raman, senior executive director; and Tapan Sahoo, executive vice-president engineering, underscore the importance of localising supply chain for the ecosystem shift from internal combustion engine to electric vehicles, while focusing on the consumer. Industry wants a long-term policy and a plan for 15-20 years for policy certainty. “Right now, we do not even know if there will be a FAME-III,” they say.

Varun Chaturvedi, MD & CEO of Volttic, an EV charging infrastructure company, says, “We want a more capital-intensive support to source our resources which sometimes becomes a hindrance for newer businesses in this field. Getting loans from banks and non-banking financial corporations is difficult and we need financial support for capital expenditure.”

The overall sense in the industry is that it is important to incentivise players to setup local manufacturing and to have more rational cost structures to lower investment costs. This is needed to build supplies, jobs and skills around EVs while stimulating consumer demand.

Other large business houses have begun to show interest in the battery sector. Reliance is reportedly looking at energy storage for renewables and other electronics to leverage synergies among the businesses (including mobile phones and cell towers) that use lithium ion batteries. They may offer a future option to diversify into electric vehicles.

The economics of electric mobility, as opposed to the internal combustion engine economy, is India’s chance to stay ahead of the global curve. While there will be restructuring in trade to access battery materials and mines, domestic industry and market development is necessary.

An electro-economy is an inevitable reality. The quicker India prepares for this change, the bigger will be the economic spin off, along with low carbon and health benefits.