With just 10 years left and funding gap of $3,960 million, a tough road lies ahead for the industry

Clean cooking is vital to improve the health of women and children by reducing indoor smoke, but the world is likely to miss the 2030 target for access to clean energy because access to finance continues to hinder growth.

The industry that delivers affordable, high-quality clean cooking products is led by the private sector and requires financial investments as well as support for growth. However, in 2017, the finance available for clean cooking companies was just one per cent of the $4,000 million required to achieve universal access by 2030, flags a new report.

The first-of-its-kind report highlights investments and business model innovation in the clean cooking sector. With meagre $40 million that the sector managed to receive, it is yet to raise 99 per cent of the funds needed by 2030, said the Global Clean Cooking Alliance.

This progress report of sustainable and inclusive clean cooking industry is based on investment, operational, and financial performance data provided by more than 40 large companies from across the world, including Greenway Appliances from India.

Who and where: Clean cooking companies with largest investments

Innovation and private sector investment are driving the industry forward, with a growing number of scalable business models capable of meeting the cooking energy needs of developing markets, says the report. 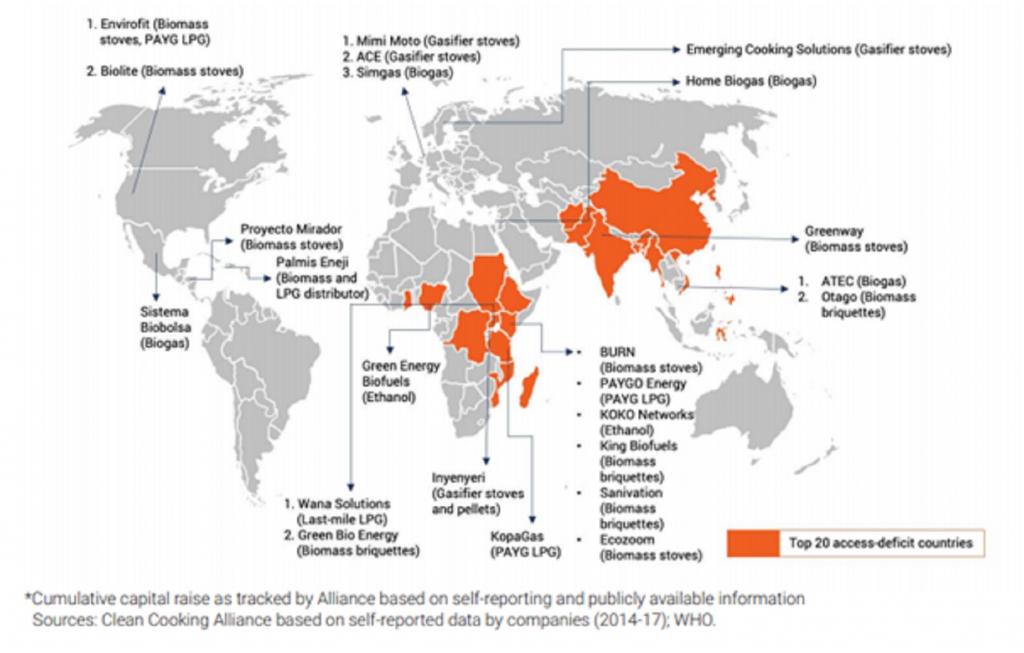 In fact, the total investment of $40 million in 2017 has been greater than in the past five years, but it is still inadequate, says the Global Alliance on Clean Stoves. “In spite of the multi-billion-dollar funding gap that continues to hinder growth, the clean cooking sector has come a long way since 2010,” Dymphna van der Lans, CEO of the Alliance, was quoted as saying.

The share of the global population using cleaner cooking fuels and technologies, such as LPG and stoves that burn less wood or charcoal, also increased to 61 per cent in 2017 from 57 per cent in 2010.

Growth of the sector is critical

Accelerating growth of clean cooking industries is critical — when the target market is over 3 billion people across the world who use highly inefficient and polluting cooking stoves; India alone has more than 800 million of them.

Financial viability of fuel has been a challenge

Companies that sell stoves and associated fuels (“tool and fuel” business models) have attracted increased visibility and investment in the past several years, according to the report.

For example, 31 per cent of the companies considered for this study have coupled biomass pellets with cleaner, more efficient, fan-driven, gasifier stoves that achieve high quality combustion. But demonstrating the financial viability of pellet production and distribution has been a key challenge for the growth of such companies.

More companies are joining the industry, but are yet to scale-up by becoming profitable and growing revenue at a pace that substantially outpaces costs and overheads.

Thus, for clean cooking solutions to truly scale throughout developing countries and achieve the significant social, environmental and health impacts, models and technologies must be proven in “easier contexts” first.

Only then can the established private sector be incentivised to expand and serve more challenging consumer segments and countries through targeted subsidies.

Meanwhile, companies with maximum experience in the field and business models that demonstrate the greatest potential for growth and profitability along with the impact are preferred most by the investors and funders.

For example, Sistema.bio that manufactures prefabricated biogas systems and has been operating in Mexico for eight years raised $12 million in 2018 alone, funding its expansion in sub-Saharan Africa and Asia.

“We are very encouraged by the additional investments, support and partnerships that have been attracted to biogas as a promising clean cooking alternative, which can support energy access as well as help achieve nine other Sustainable Development Goals,” Alex Eaton, chief executive officer and co-founder of Sistema.bio, was quoted as saying.

According to the report, government policies have a major role in supporting or inhibiting the growth of clean cooking solutions — in particular taxes and tariffs, quality standards and labeling initiatives, as well as financial incentives, including subsidies.

Energy sector-focused funds such as Energy Access Ventures and Kawi Safi, as well as more generalist impact funds such as Novastar Ventures and Global Partnerships have preferred to invest in the East African region due to favourable policies that encourage innovation and investment.

Favourable policies have helped 12 companies, headquartered in East Africa, receive more than 50 per cent of the total investment made by at least 40 major companies tracked in the report.

In fact, the favourable policies contributed to growth of the off-grid solar sector in East Africa. Off-grid solar sector gained from dramatic cost component declines on solar photovoltaic (PV) panels and light-emitting diode (LED) lights, together with the emergence of mobile money.

Hence fuel-based business models and mobile money applications that increase affordability will be critical for clean cooking sector’s growth. In addition to this, the past and potential technological innovations also hold significant promise for increasing the viability of biogas systems, metered LPG, ethanol distribution, pellets and gasifiers, electric stoves, and perhaps other future technologies, says the report.

According to the World Bank, Kenya has been at the forefront of establishing policies that support clean cooking sector growth since 2010. But unfavourable policy changes in 2018 led the companies to halt operations or pull out of the market altogether.

Thus, policy stability and predictability are essential for clean cooking businesses to succeed and supply clean fuel to kitchens. This is critical to ensure that clean cook stoves are at the centre of global and national action for universal and sustainable energy access to the world’s poorest and most marginalised.