The reactor will take at least 24 hours to cool 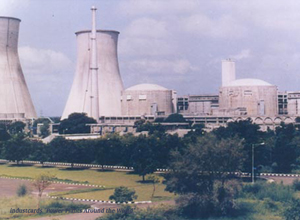 Authorities at the Kakrapar Atomic Power Station (KAPS) in southern Gujarat closed down one of its units on Friday as a precautionary measure after leakage in its primary heat transport system.
"Consequent to a small leak in its primary heat transport (PHT) system, Unit 1 of the Kakrapar Atomic Power Station, which was operating at its rated power, had to be shut down at about 9 am on Friday. All safety systems are working as intended. The radioactivity/radiation levels in the plant premises and outside are normal," a statement issued by KAPS director Lalit Kumar Jain said.
According to officials, no case of nuclear radiation has been reported. They added that employees were isolated for few hours as a standard measure to save them from radation. The employees were then sent home.
The reactor would take at least 24 hours to cool down, officials said.
KAPS is located near the town of Vyara in south Gujarat's Tapi district. It consists of two units of pressurised heavy water reactors of 220 MW each. The first reactor was commissioned in September 1992 and it started commercial production in May 1993 while the second unit was commissioned in January 1995 and began commercial production in September 1995.
Nuclear Power Nuclear Power Plants Nuclear Safety Nuclear Accidents Kakrapar APS Nuclear Power … Energy India Gujarat
Donate Now