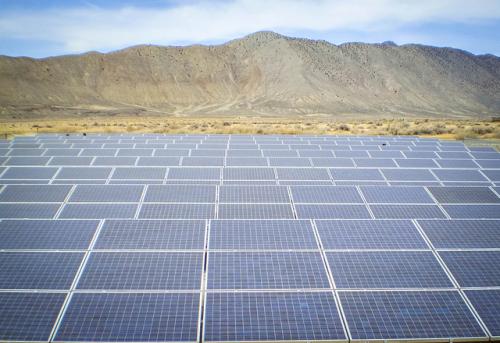 The Ministry of New and Renewable Energy has released a new draft policy on hybridisation of wind and solar power plants.

The ministry had recently announced new target to reach 175 GW installed capacity from renewable energy sources including 100 GW from solar and 60 GW from wind by the year 2022. The new draft policy aims to help realize these targets.

Scientific studies have revealed that solar energy and wind energy are almost complementary to each other. Hybridising the two can bring about efficient utilisation of transmission infrastructure and land and reduce variability in renewable power generation, achieving grid stability.

Superimposing the maps of wind and solar resources shows large areas where both wind and solar have high to moderate potential. Already existing wind farms have the scope of adding solar PV capacity and similarly there may be wind potential in the vicinity of existing solar PV plants.

How can power plants be hybridised?

There are different approaches towards integrating wind and solar power production depending upon the size the sources integrated and the technology type.

However, grid stability depends heavily on the size of solar or wind elements with respect to the resource availability.

Government has also made provisions where existing wind power or solar power projects, willing to install solar PV plant or wind turbine generators respectively, can avail the benefit of hybrid project, but with few conditions on its way.

Commenting on the new policy Sridhar Sekar, senior research associate in the renewable energy division at non-profit Centre for Science and Environment says, “The overall policy is a good initiative, but the government needs to elaborate on the tariff plans and needs to bring more transparency into it. There has to be a proper distinction made between RPO and non-solar RPOs.”

Financial incentives currently given to wind and solar power projects will be extended to hybrid projects. Low cost financing will also be made available for hybrid projects through Indian Renewable Energy Development Agency and other financial institutions including multilateral banks.

The government also plans to support the development of technology and set standards for hybrid systems.