A new government policy has made it easier to dig deeper for unconventional oil and gas. But a village in Tamil Nadu is up in arms against the risks involved in the extraction of these fuels 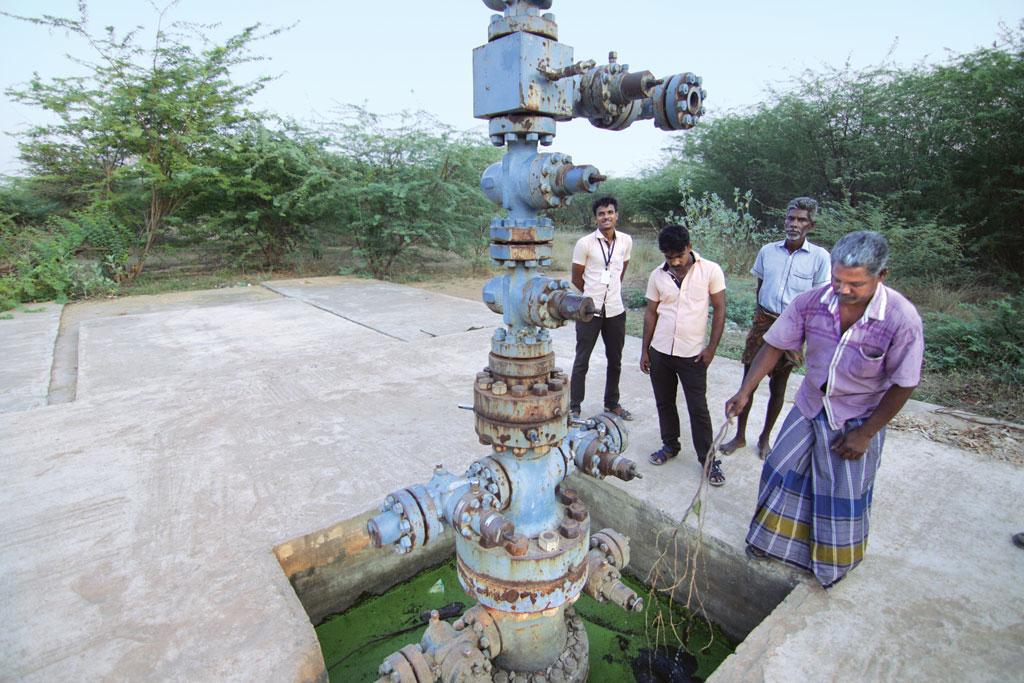 Village residents show the exploratory well near Neduvasal in Pudukkottai district. The well is on a barren patch of land adjoining several hectares of cropped land (Photo: Bhaskar Jyoti Goswami)

In March 2016, the Central government brought about a critical change in the country’s hydrocarbon exploration policy. It replaced the New Exploration Licensing Policy (NELP), which had been in existence for 18 years, with the Hydrocarbon Exploration and Licensing Policy (HELP). Under HELP, the requirement for separate licences to explore and extract conventional as well as unconventional oil and gas resources, including CBM (coal-bed methane), shale gas/oil and gas hydrates, was replaced by a single licence.

The move is part of the Central government’s strategy to increase competitiveness in hydrocarbon exploration, reduce India’s dependence on imports and give contractors a relaxed time frame and more freedom to explore and extract hydrocarbons.

But a solitary oil rig on the outskirts of Neduvasal village in Tamil Nadu’s Pudukkottai district sticks out like a sore thumb in the government’s ambitious plans. A day after the Director General of Hydrocarbons (DGH)—under the Union petroleum ministry—announced that the 10 square kilometres of land on which the rig is located was to be auctioned along with 43 other sites, the village residents began protests. This was in February 2017. On March 27, private player Gem Labs obtained the exploratory and production rights of the site, even as the protests continued. In April, participation in the protests has swollen with students arriving from different parts of the state.

The oil rig stands behind a thicket of trees on an otherwise barren patch of land. A black flag is tied to the top as a sign of protest. “For about 10 years now, Oil and Natural Gas Corporation Limited (ONGC) officials have been running tests on these lands,” says G Madiyakaran, a resident of the village. “We were never informed about their intentions. We were only told that there might be petrol under our land. Now they seem to have found something and the world is telling us that it will be harmful for us, our land and livelihoods.”

Neduvasal is located in the Cauvery Delta, a region rich in fossil fuel reserves and accustomed to exploration activities since the late 1950s. DGH estimates say that there are about 700 million tonnes of hydrocarbon reserves here, such as oil and natural gas, including CBM and shale (see ‘Risky deposits’). While these gases are potent sources of energy, they are more difficult to extract, making a blanket licence for their extraction contentious. While the Gem Labs’ current contract covers only conventional oil and gas and there is no clarity on whether there are any CBM and shale reserves at Neduvasal, the new licensing rules open up the possibility of CBM and shale extraction in the future.

Conventional oil and gas are tapped from between the cap-rock or a harder and more resistant rock and the sedimentary layer where oil and gas collect. When a well is drilled into the earth, the pressure of the reservoir is released and up to a fifth of the volume is extracted utilising this pressure. Extracting the rest of the reservoir requires the injection of a fluid (water) under high pressure to force out any oil or gas that may be trapped in the reservoir. 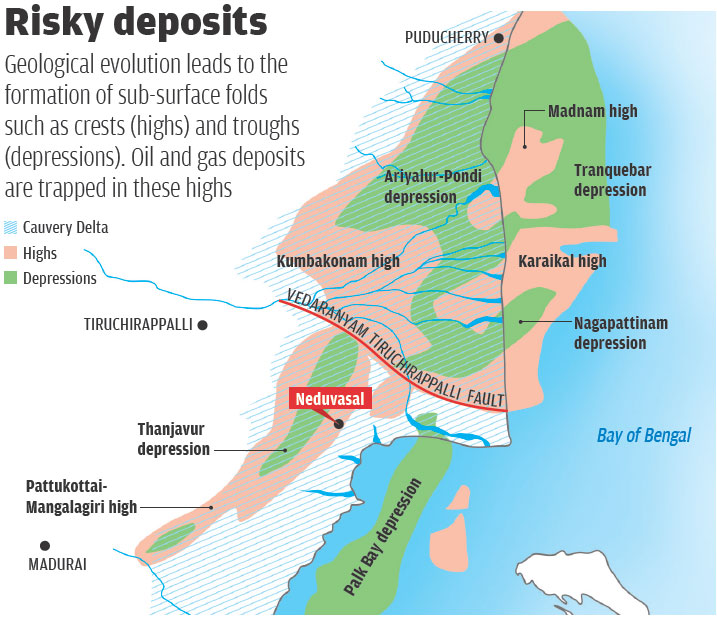 But extracting hydrocarbons requires drilling deeper wells. If conventional oil and gas are found between 1,750 and 6,000 metres below the surface in the Cauvery Delta, hydrocarbons such as CBM and shale are located four to five times deeper. Also, CBM and shale extraction is possible only with more intrusive and destructive techniques that may involve fracturing the layers of rock below. The process is resource intensive and uses much larger amounts of water contaminated with heavy metals. While steel casing typically prevents wastewater from contaminating the surrounding aquifers in conventional oil and gas extraction, no such casing can be used in CBM and shale extraction.

It is this fear of losing access to safe and sufficient groundwater that has worried farmers. “Unconventional extraction can be dangerous,” says S Ranganathan, a geologist-turned-farmer from Tiruvarur district, also in the Cauvery Delta. “There is no way extraction of coal- or lignite-bed methane should be permitted. Processing of the gas is complicated and will undoubtedly put an end to agriculture in the region.” Their fears are not unfounded. A proposed project to extract CBM and shale in Thirvarur and Thanjavur districts from 2010 led to protests and the formation of a state government-appointed committee. This committee recommended the rejection or review of the project based on concerns related to air and soil pollution, contamination and depletion of ground-water, leakages and fires. This compelled Tamil Nadu to scrap the project in 2016 and declare that it would never permit CBM and shale extraction.

Officials also underestimate the problem of land subsidence. When oil and gas are extracted from the cavity between two layers of rock in the earth, the pressure maintained by the fossil fuels is lost. This causes the load of the upper layer of rock to fall on the semi-consolidated sedimentary rock, compressing it further. “Injecting of water in secondary retrieval maintains the pressure to some extent, but with the extraction of natural gas, maintaining reservoir pressure is impossible,” says Krishna Rao, a retired professor of geology at Andhra University. Rao filed a writ petition in the Andhra High Court in 2009 to check for land subsidence in the Krishna-Godavari (KG) basin, another oil and gas-rich delta. Three reports produced by court-appointed committees did not rule out the risk of subsidence. Neduvasal is merely 30 km from the coast and if subsidence occurs, it could, along with rising sea levels, allow the seawater to advance and rapidly increase groundwater salinity. This would cause irreparable damage to agriculture in the region.

There is another concern: the Environmental Impact Assessment (EIA) of the project is not readily available. Of all the EIAs published for activities in the Cauvery Delta, there is no mention of the well in Neduvasal. Given this lack of transparency and the threat to agriculture, it is no surprise that Neduvasal residents are not willing to support the country’s new licensing policy.”

The story has been taken from the 1-15 May, 2017 edition of Down To Earth magazine