Powerful winds of change: How India can benefit from offshore 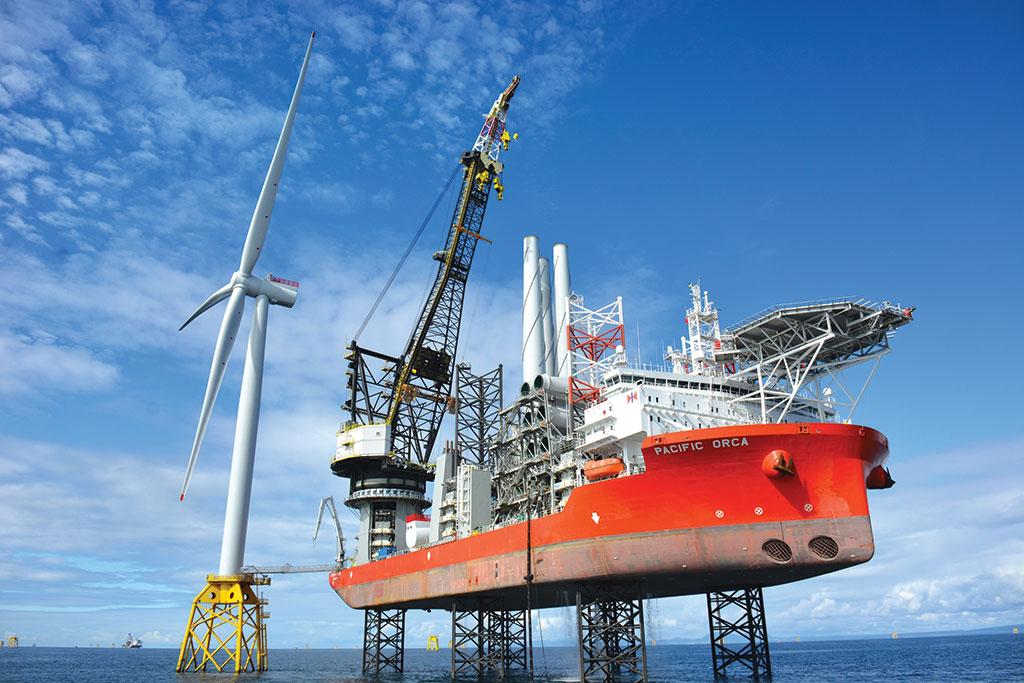 This is the third and final part in a series on offshore wind energy.

India is now trying to expand its green energy portfolio by harnessing the entirely unexploited offshore wind energy potential along its 7,600 kilometres coastline. The focus on offshore has increased in recent years partly due to its global rise and partly due to the ongoing lull in the onshore wind energy segment — with only 3.3 gigawatt (GW) added in the past two years.

As Bhanu Pratap Yadav, joint secretary, Ministry of New and Renewable Energy (MNRE), explains: “Repowering old wind farms with higher capacity turbines does not offer the same scale as offshore wind. Globally, the offshore wind energy segment is thriving and we need to get in the game.” The government has already set an ambitious target of developing 5 GW of offshore capacity by 2022, and a further 30 GW by 2030.

The basic framework for offshore project development in India is provided by the National Offshore Wind Policy notified in October 2015. The policy allows for setting up of offshore wind farms up to 200 nautical miles. Developers can undertake project exploration and construction activities only after procuring a 35-year lease from the government, as stated in the Draft Offshore Wind Energy Lease Rules released in January 2019.

So far, sites have been identified off the coasts of Gujarat and Tamil Nadu through a programme called Facilitating Offshore Wind in India (FOWIND) launched by the ministry in December 2013 and led by GWEC.

“The FOWIND project came up with eight potential zones in the two states that are most suitable for offshore wind development. These were identified by pragmatically ranking their compliance with a set of defined technical and environmental parameters,” informs Kumar. Preliminary assessments indicate that Tamil Nadu and Gujarat each have an offshore potential of around 100 GW with existing technology.

The first offshore wind project of 1 GW capacity is planned off the Gujarat coast in the zone B of FOWIND defined zones at Gulf of Khambhat. It is likely to be tendered by the end of this year after cabinet’s approval for the viability gap funding (VGF), conceptually similar to the surcharge offered in European countries. The government is currently set to identify more sites for projects to meet its short-term capacity target.

“We are planning to install five more LiDAR (Light Detection and Ranging) systems, including two in Gujarat and three in Tamil Nadu soon. These will give visibility of sites for the 5 GW target,” says K Balaraman, Director General of National Institute of Wind Energy (NIWE), an autonomous research and development institution under MNRE, identified as the nodal agency for offshore wind power development in India. The tender for four of these LiDAR systems, two each in Gujarat and Tamil Nadu, was issued in August 2019.

For India, offshore wind energy has multiple benefits over onshore. “The biggest advantage of offshore observed worldwide is that the generation profile is much flatter compared to onshore farm.

As evidenced from the LiDAR data collected in Gujarat, generation from installations will be more evenly distributed across the year, while 60 per cent of the generation from onshore projects tends to be concentrated in three to four months,” says Parag Sharma, chief operating officer, New Delhi-based ReNew Power, one of India’s leading renewable energy developers.

Despite suitable conditions, the pace of development has been slow and the 5 GW target is out of reach given project gestation is 6-7 years. While the government is busy preparing the tenders, supply chain issues have been left unaddressed.

However, even though offshore wind capacity development is more expensive, the economics can work out if VGF is provided along with tax breaks and technology benefits. Developers inform that tariff for the initial project is expected to be Rs 10-12 per unit, which will decline to Rs 8-8.5 per unit with the proposed VGF of Rs 6 crore per MW. This is still higher than the average power purchase cost of Rs 3.5-4 per unit that Gujarat is willing to pay.

Further cost reductions will need to be achieved through turbine designs customised for low-wind conditions, low labour cost as well as tax waivers.

“At present, tax burden on the industry is estimated to be 30-31 per cent. Developers have been requesting the government to waive off the custom duties and impose only the 5 per cent goods and services tax (GST), in line with the concessions being provided to oil and gas industry,” says Sharma. This is crucial considering that most of the projects are, at present, dependent on foreign technology. 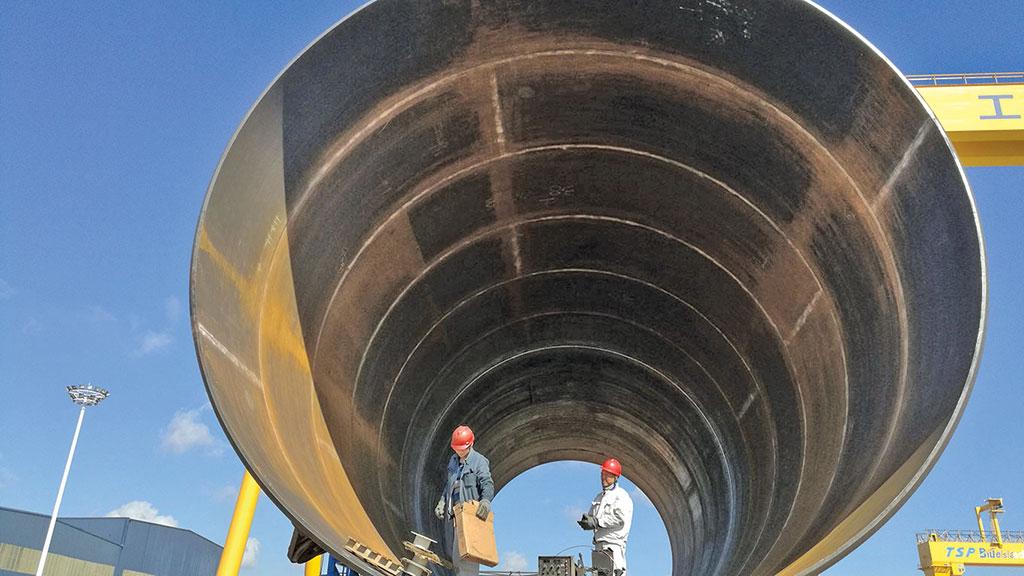 Cost can be brought down still further by developing local supply chain and infrastructure. “India will need its own suppliers if costs are to be made competitive. Investments must be directed towards port development and setting up foundation manufacturing facilities close to the ports,” says Jochen Dirksmeyer, head, business development, India, WPD Offshore Solution.

There are other factors that could make offshore farms unviable. The State of Renewable Energy in India, 2019 report of the Delhi-based non-profit Centre for Science and Environment (CSE) points out that allied infrastructure development and their costs are key areas of concern. For example, at present the onus of sub-sea transmission infrastructure development is on the developer.

However, CSE says that large investments in offshore facilities can, perhaps, be best addressed by delinking the responsibilities for transmission and generation — similar to the United Kingdom's offshore transmission-owner model to ensure that the projects remain competitive. Menno Nagel, commercial head, Van Oord, a Dutch maritime contracting company, points out that non availability of quality steel could also become a limiting factor.

Long-term visibility on project pipeline with clearly identified prospective sites is also essential. “While all major turbine manufacturing companies have a base in India, they will not invest in designing and manufacturing offshore turbines for Indian wind conditions unless the pipeline commitment is firm,” explains Sharma.

However, none of these issues are currently being addressed by the existing policy, which is quite bareboned. As Nikhilesh Ranjan Singh, head of secretariat, FOWPI Project, points out: “There are glaring gaps in the policy with respect to evacuation and port infrastructure development, leasing and allocation of offshore blocks to bidders and the government’s support to make tariffs competitive.”

Offshore developers will also need to be provided assurance that PPAs will be upheld given that discoms in India are infamous for payment delays and generation curtailments. Such concerns were also raised in the UK during the initial phases of offshore development, following which the government passed a law stating that PPAs once signed cannot be reversed by subsequent governments.

The policy requirements for supporting offshore wind thus remain familiar, wherein the industry would need to be supported during the initial years through VGF and/or bundling with cheaper power. Reverse competitive bidding of large capacities would help achieve the lowest possible tariffs.

The industry would further need to be supported through expedited permitting and transmission development. Demand creation would be crucial, may be through the introduction of offshore specific renewable purchase obligations.

The only fly in the ointment could be the fact that unlike European countries, which had invested substantial time in collecting authentic data on seabed conditions, water depth and wind conditions before bidding of projects, India is rushing through this preliminary stage.

This could be catastrophic, and derail project economics. To fast-track development, India has decided to skip the pilot project, which was previously part of the sector development plan.

“The offshore technology has seen success across the globe, there is nothing to prove. Moreover, a demonstration project is associated with very high costs due to the smaller scale,” contends Yadav. While most in the industry agree, some stress that implementing the pilot would have helped better understand the challenges. Exploring the offshore potential has become crucial as India looks to expand its electricity consumption and support growth.

The Economic Survey 2019 stressed upon India’s need to increase the per capita energy consumption by at least 2.5 times to become an upper-middle income country. Achieving this through sustainable sources would entail development of alternatives like offshore wind energy.

So far, the government’s focus has remained on solar photovoltaic segment where capacity expanded from just 2.6 GW in March 2015 to 31.1 GW in September 2019, making India one of the fastest expanding solar markets in the world. India already leads in onshore wind, with the world’s fourth-highest installed capacity of 35.6 GW.

But growth in these sectors has stagnated as land for large farms is in short supply. India needs to learn from European countries and make abundant use of its long coastline to tap into offshore energy.

This was first published in Down To Earth's print edition dated 1-15 November, 2019