Powerful winds of change: Offshore wind power has taken off but challenges persist

Technological improvements and falling costs are driving a boom in offshore wind power projects worldwide. Still, the industry faces its own peculiar share of challenges 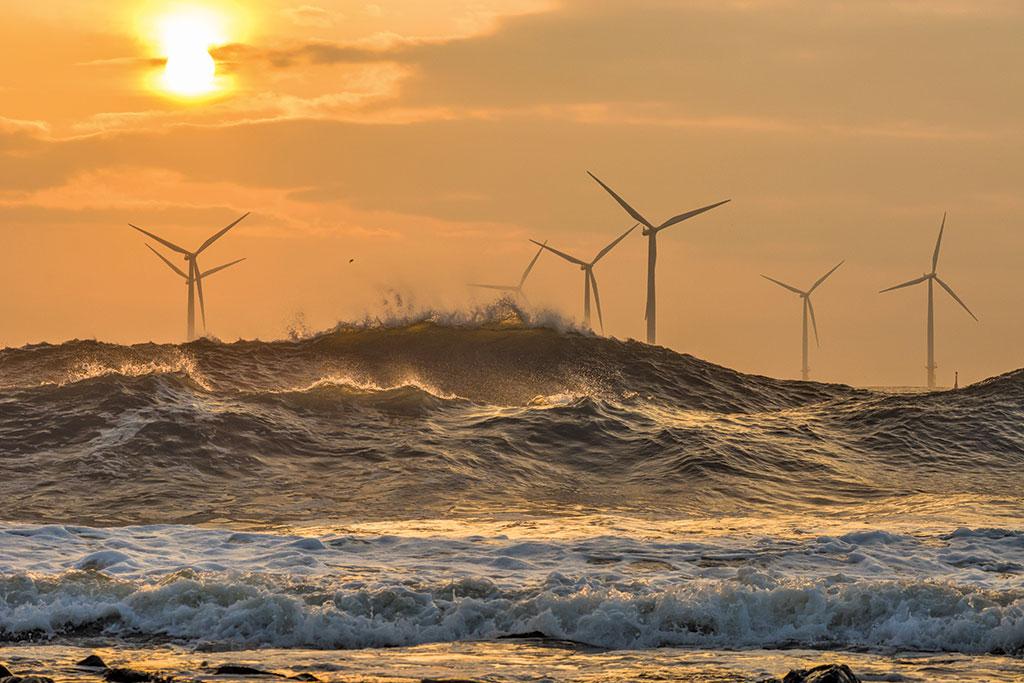 This is the first part of a three-part series:

Technology has come a long way since windmills were used centuries ago to mill grain or pump water. Modern wind turbines are highly evolved versions and the utility-scale ones are over 100 metres tall and can power thousands of homes.

A wind farm is an area with a high density of turbines for electricity generation — their history goes back over a century, when engineers saw that a cluster of turbines on land could improve the electricity generation profile. The nomenclature has changed and these farms are now called onshore wind farms — the reason for this is the relatively new and fascinating story of offshore wind farms.

The basics are the same: Harnessing the energy of wind, but by building wind farms in oceans where speeds are higher and land is not a concern. The electricity produced by offshore wind turbines travels back to land through a series of cable systems that lay on the seabed.

The United Kingdom has led the charge on offshore wind installations and is currently the country with most installations by a mile. Renewable energy sources generated more electricity in the UK than fossil fuel power plants for the first, straight three-month period since record-keeping began more than 100 years ago, according to an analysis published by UK-based website Carbon Brief on October 14, 2019.

Wind farms, solar panels, biomass and hydroelectric power projects generated an estimated 29.5 terawatt hours (TWhs) of electricity in the third quarter, between July and September of 2019, marginally exceeding the 29.1 TWhs produced by plants that run on fossil fuels such as coal, gas and oil.

In 2003, the 60 megawatt (MW) North Hoyle, the first offshore wind farm in the UK, became operational at a depth of less than 10 m and at a distance of 7.5 km from the shore. It was the most powerful farm at that time and could power 50,000 homes annualy.

In contrast, the 588 MW Beatrice Offshore Wind Farm, located near a former oil field in the Moray Firth, north of Scotland, and inaugurated by Prince Charles on July 29, 2019 was at a depth of 45 m and at a distance of 13 km from the coast. The 84-turbine Beatrice has the capacity to power up to 0.45 million homes.

Offshore wind energy has been identified as one of 10 industries where the UK has the potential to be a market leader and features heavily in its plans of being a net-zero emissions country by 2050. The country hopes to produce 30 gigawatt (GW) of offshore wind energy by 2030, a massive transition where 33 per cent of the UK’s electricity would come from offshore wind farms — up from 8 per cent in 2018.

“It would be generating thousands of high-quality jobs across the UK, a strong supply chain and a fivefold increase in exports. This is our modern industrial strategy in action,” Claire Perry, UK’s Energy & Clean Growth minister said in a statement on March 2, 2019, when the UK Department for Business, Energy and Industrial Strategy officially launched its Offshore Wind Sector Deal.

This acceleration could not have been more unpredictable going by the lull in the initial years. The uptake of offshore wind energy was slow after 1991, when Denmark built Vindeby, the first offshore wind farm in the world with 11 small 450-kilowatt (kW) turbines in the shallow waters around Lolland — the country’s fourth-largest island. The electricity industry considered the development to be too small at that time.

According to an article published in the New Scientist on October 20, 1990, special winches were used for construction as large cranes could not be used at sea. A system to control the turbines from land had to be set up using optical fibre cable incorporated into the seabed power cable taking energy from the turbines to the shore.

New turbines were prepared with three 16 m blades made from polyester reinforced with glass fibre, mounted on a 35 m tubular steel tower. The concrete foundations were built in a dry dock carved out of the shoreline of the island, which was then flooded to float the finished foundations to sea using a large catamaran, where they were lowered onto prepared bases, filled with gravel and surrounded by large boulders.

Offshore wind was born mainly due to the lack of space for the development of large onshore wind projects in the densely populated areas of Western Europe. The European countries led the offshore wind industry as they were the first to envision oceans as a clean energy resource and were aided by a facilitating policy environment that saw the need for clean energy much before others.

The import of offshore wind energy was realised in 2000 when the first large-scale offshore farm, Middelgrunden, 3.5 km off Copenhagen, was built with 20 Bonus 2 MW turbines and a capacity of 40 MW. Now, Denmark’s biggest offshore wind farm, Thor, with a capacity of at least 800 MW, is set to be installed in the North Sea. Thor will supply power to 0.8 million households and create more than 8,000 jobs in the layout process.

The United States was a late entrant into the offshore wind energy field. It was in December 2016 that the country got its first operating offshore wind farm, the Block Island Wind Farm, off Rhode Island. The farm had a capacity of just 30 MW but it did show that the US was finally entering the offshore wind game.

The large coastline in the US offers the country significant potential estimated at over 2,000 GW. In December 2016, the US introduced the National Offshore Wind Strategy to develop the industry. The US’ Bureau of Ocean Energy Management (BoEM), the federal agency responsible for offshore resources, has already granted over 15 leases for offshore wind development.

BoEM claims that the leased offshore blocks could support over 21 GW of energy. Nine mega projects signed in New York, New Jersey and states like Massachusetts and Rhode Island, with a cumulative capacity of over 4.8 GW are expected to be commissioned in the coming years. This alone could power over six million homes along the US coast. The effort is to spur an estimated $70 billion offshore wind industry in the US over the next decade.

Ironically, there is a political backlash for this job churning sector when the US is focused on creating more jobs. President Donald Trump has not been as supportive of wind power. Trump has made hundreds of comments on Twitter and in public opposing the expansion of wind power. “They say the noise causes cancer,” Trump told a crowd of supporters last spring, soliciting an immediate and strong rebuttal from the American Cancer Society.

The roadblock for the industry came in August this year when the US Interior Department extended the environmental review for the $2.8 billion Vineyard Wind project off Massachusetts. The 800 MW project is the first of several massive wind farms planned off the East Coast. The review came in response to concerns from fisherfolk about the impact of offshore wind development on fisheries.

“The question facing the industry is whether the review represents a genuine attempt to understand the environmental impacts associated with offshore wind or an effort to kill it, said Anthony Logan, an analyst who tracks the industry at Wood Mackenzie, a consulting firm,” E&E News reported. Despite all that, analysts predict that the US will swiftly catch up.

“I get that it’s a renewable energy project, and I get that people are excited about it,” says Drew Minkiewicz, an attorney with the Fisheries Survival Fund, which has battled Equinor’s Empire Wind project, “but would you allow a nuclear reactor or a coal plant to write its own environmental impact statement?” says a Bloomberg report quoting Minkiewicz on October 1.

The dampening news from the US apart, global interest remains bullish. Even Asian countries have jumped on to the bandwagon. India, China, Japan, South Korea, Taiwan and Vietnam are emerging as the new areas for offshore energy growth. Taiwan is considered as an ideal destination.

Global developers are making a beeline to the country which has strong winds and a shallow coastline which make it perfect for offshore wind farms. The country introduced the Offshore Demonstration Incentive Program (DIP) in 2012 and foundation installations for a demonstration project — Formosa I, with two turbines of 4 MW each off the coast of Miaoli County—began in 2014. The country has plans to provide 5.5 GW by 2030 through projects such as Changhua 1 and 2a.

In 2018, China had already surpassed European countries in annual installations with 1.8 GW. China is aiming to install 10 GW of offshore wind energy by 2020. Similarly, Japan, South Korea and India have a target of installing 10 GW, 12 GW and 30 GW respectively by 2030. “The Asian markets are predicted to add 100 GW in offshore wind by 2030,” says Alok Kumar, country manager India, Advisory at DNV GL–Energy, a technology giant that is advising and assisting India with its first offshore wind farm.

This was first published in Down To Earth print edition (dated 1-15 November, 2019)