Even as the Clinton administration seeks to phase in a tax on gas, oil, coal and nuclear energy, oil companies complain the levy will damage economic recovery and endanger jobs. 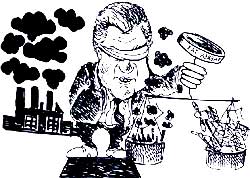 THE US government says the energy tax under consideration could reduce the US budget deficit, cut oil imports and meet environmental goals. Nevertheless, the controversy it has sparked is heating up and US oil companies are challenging the levy.

Environmental groups have complained to Clinton that uniformly taxing all kinds of energy fails to differentiate between "clean" and "dirty" energy. They warn that a tax based solely on BTUs, may discourage the use of fossil fuels but it would surely discourage the use of other environmentally benign, "renewable" energies, such as wind, geothermal and wood. Most environmentalists want the tax to be targeted at fuels in proportion to the amount of carbon dioxide created because such a tax would encourage the use of renewable energy sources.

Meanwhile, energy industry spokespersons are warning a levy on petrol, coal, heating oil and gas could damage the prospects of the US economy picking up and cause a loss of jobs. The American Petroleum Institute (API) contends the average, annual cost to each American family will be $475, which is four times higher than US treasury officials' estimate. API president Charles DiBona adds the levy will entail a loss of 700,000 jobs. The proposed levy "really amounts to a thinly disguised gasoline tax," says DiBona, and it could reduce the gross domestic product by $170 billion over five years.

US treasury secretary Lloyd Bentsen, however, dismissed API's figures as "wrong" and his colleague in the US administration, Leon Panetta, director of the office of management and budget, pointed out, "A plan that is bold is going to have some special interest opposition across the board."

During campaigning, US presidential candidate Ross Perot suggested imposing a gasoline tax as a way to finance solutions to transit, environmental and energy problems. Clinton, however, objects to a gasoline tax, contending it will adversely affect low- and middle-income families. The "holy cow" of the American way of life is clearly difficult to touch, let alone change.