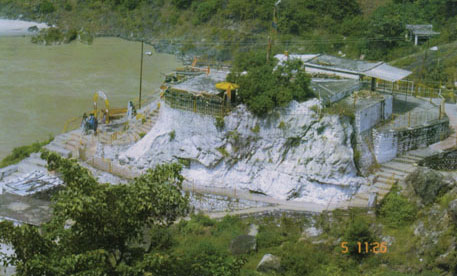 The Union Ministry of Environment and Forests (MoEF) today revoked its ‘stop-work order’ to relocate a temple dedicated to deity Dhari Devi on the banks of the river Alaknanda in Uttarakhand. The ministry issued this revocation after the Supreme Court of India castigated it for issuing this notice, saying that the final order on this relocation case has been reserved by the court.  Infrastructure giant GVK, the proponents of the 330 Mw Shrinagar Hydro Electric project, wants this temple to be relocated because it falls within the dam site. MoEF had opposed this relocation because it is an important religious site for Hindus and the shifting could impinge on their right to worship.

In an affidavit dated May 6, MoEF had prayed before the court that the project proponent be directed to submit a plan which would preserve the sanctity of the temple. On May 10, as the court was going on leave without giving the final verdict, MOEF issued this stop-work order.

The stop work notice was issued to the developer, Alaknanda Hydro Power Co Ltd (AHPCL), a subsidiary of GVK. In response, GVK pleaded a quick hearing even though the court was going on vacation.

Today the SC bench comprising Justice KS Radhakrishnan and Justice Dipak Misra questioned MoEF’s reasons for this stop work notice when the court had already reserved its judgment. After this rebuke, MoEF issued the revocation.

SC earlier on May 6 had also rebuked MoEF for inconsistencies between its own report on the compliance of this hydropower project with environmental clearance conditions and its affidavit. Although MoEF’s compliance report had said that Dhari Devi temple could be relocated, its affidavit said otherwise.

The Shrinagar project, which was originally conceived in the 1980s, was to begin production in 2006, but has been plagued by financial and regulatory problems. Once the dam is complete, Dhari Devi temple will get submerged if it is not relocated. GVK had suggested that the temple could be raised onto concrete pillars to save submergence.

But the issue became political in 2012 after the BJP entered the agitation started by hindu sadhus. Senior politicians of the BJP have also submitted memoranda to Prime Minister Manmohan Singh against relocating the temple.