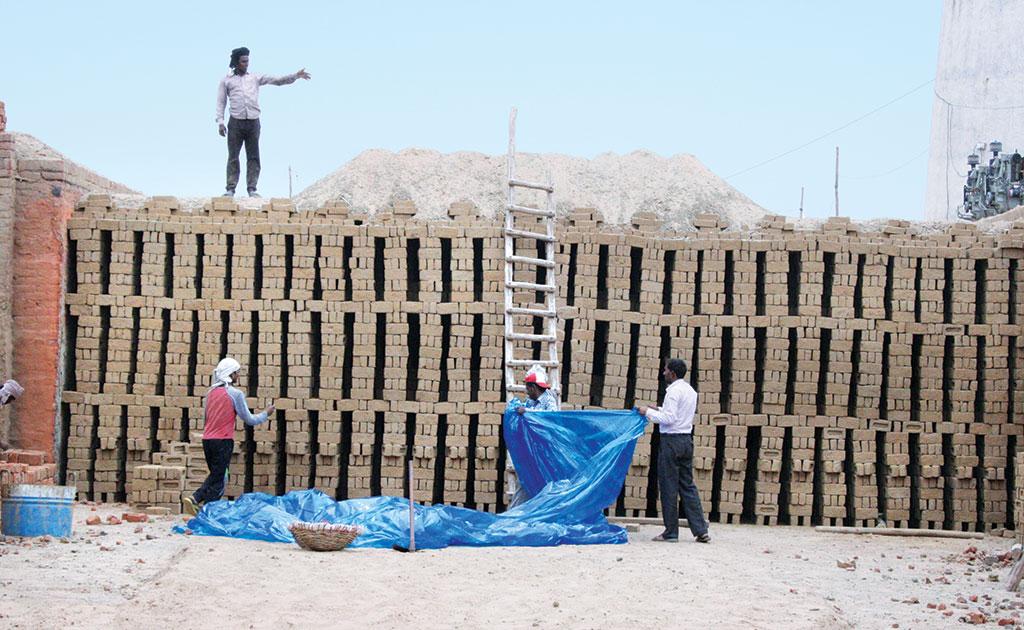 Many kilns in Delh-NCR have made cosmetic changes to their structure to pretend that they have made the required technological upgrade (Photo: Rahul Singh)

On the outside, Raj Kumar Yadav’s brick kiln in Jhajjar district of Haryana looks like a typical unit running on “zigzag” technology. Named after an efficient firing technique employed to burn bricks, zigzag kilns have an unmistakable rectangular wall. However, a closer look shows that Yadav has just modified the kiln’s wall into a rectangle. It still runs on the traditional and highly polluting fixed-chimney bull’s trench kiln (FCBTK) technology, in which bricks are just lined up and burnt. According to the Central Pollution Control Board (CPCB), zigzag kilns use 25 per cent less coal than FCBTK and emit 70 per cent less suspended particulate matter.

In May 2017, the Environment Pollution (Prevention and Control) Authority for the National Capital Region, a Central government-constituted committee, ordered that all kilns in the Delhi-National Capital Region (NCR) must shift to the zigzag technology before the next season in 2018 (kilns shut down during the monsoon and usually start operation during the winters). But as the deadline draws near, about 74 per cent of Delhi-NCR’s 3,823 kilns have yet not made the transition, says a survey published by Delhi-based non-profit Centre for Science and Environment (CSE) in July.

The survey, which covered 76 kilns in 13 districts of Haryana, Uttar Pradesh and Rajasthan, found that about 15 per cent of the kilns were cheating the system by firing the bricks in a straight line, even after switching to zigzag technology.

This defeats the purpose of the conversion because pollution would not reduce if the bricks are fired in a straight line. It is the arrangement of the unbaked bricks and the hot air travel path that improves the efficiency of the kiln. “Though the shift from FCBTK technology to zigzag is happening, the quality of conversion is doubtful. Only half of the converted kilns have taken steps that will cut emissions by 30-50 per cent,” says Chandra Bhushan, deputy director general, CSE.

The survey also found several other violations. In about 60 per cent of the kilns surveyed, the miyan, which is the central structure that acts as a flue duct system, was found to have improper design and dimensions. This hinders the movement of air and reduces the kiln’s fuel efficiency. About 70 per cent of the kilns had cracks and leaks in their outer walls. This results in heat loss from the surface and affects energy efficiency of the kiln.

The stack or emission monitoring facility, which is a legal compulsion for all brick kilns, was also missing in 88 per cent of the kilns surveyed. Over 30 per cent the kilns were using hazardous waste materials, such as carbon from pyrolysis plant, rubber waste and shredded plastics as fuel.

The survey also found kilns flouting fuel storage norms. In some kilns, the owners did not even cover the fuel with plastic sheets. Only in three cases in Rajasthan, the kiln owners had a designated area or platform for storage of fuel.

“It is unlikely that all the brick kiln owners in Delhi-NCR would be able to shift the kiln to zigzag technology before the start of the season,” says Vijay Goel, president of the All India Brick and Tile Manufacturers Federation (AIBTMF).

According to members of the federation, labour shortage is the biggest hurdle in shifting to zigzag technology. Ramesh Mittal, who owns a kiln in Faridabad, Haryana, says, “I am struggling to find labourers to carry out the conversion. Even the ones available are not trained to do the task.”

“Besides labour, the conversion to zigzag technology requires an investment of Rs 25-30 lakh. This is very high, and the time given for the conversion is inadequate,” explains Manish Gupta, treasurer of AIBTMF.

But these reasons do not carry much weight. “Zigzag design for brick kilns has been used since the 1970s and is a well-tested technology. In West Bengal, for instance, 2,500-3,000 brick kiln owners have been using it for years without waiting for any government order,” counters Sameer Maithel, director of Green-tech Knowledge Solutions, a clean energy research and advisory firm based in Delhi. Bihar too has been trying to make its kilns shift to zigzag technology since 2016. As per the last order passed by the state government on August 30, 2018, all kilns must shift to the cleaner technology by August 31, 2019. “Of about 6,500 brick kilns in the state, 450-500 have converted to zigzag technology so far. But despite the cost and labour issues, most kiln owners are keen to shift to zigzag. According to our survey conducted around Patna, about 65 per cent of those who has made the transition found that the zigzag technology was more fuel efficient and produced better bricks,” Maithel adds.

The regulators can take heart from the fact around 1,500 kiln owners in Delhi-NCR have submitted under-takings to switch to zigzag technology before they start operations this year. If this happens, about 65 per cent of kilns would have converted to zigzag technology. But this is unlikely.

The CSE survey recommends that government should conduct work-shops to familiarise kiln owners with the zigzag technology, which will help them improve operational practices and aid the regulators in monitoring. It should set up an expert committee at the district or state level for monitoring the kilns. CPCB must also frame guidelines to define zigzag kilns. This will help officials in ensuring compliance.