A price on the living 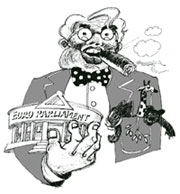 the 'largest lobby campaign in the history of the European Parliament ( ep )' culminated in a vote on July 16 that demonstrates a deplorable lack of democratic responsibility by the ep , according to ngos and environmentalists. The latter feel that Members of European Parliament ( mep ) voted against the concerns of virtually all sectors of the European civil society, to allow 'patents on life' by adopting the Biotech Patent Directive for the sole benefit of large biotech companies.

In all, 510 parliamentarians voted: 378 for the directive, with 113 against and 19 abstentions. The directive allows for the patenting of genes, plants, animals as well as human materials and body parts as long as they are 'isolated from the human body'.The only living organisms the directive specifically excludes from patenting are 'whole humans' and human embryos.

Churches, doctors, medical associations, patients, farmers, animal and plant breeders, developing countries, environmentalists, animal welfare groups and many others have, in the past months, expressed their strong opposition to the notion of patenting life forms. However, the democratically elected meps have chosen to ignore this statement by their electorate and have instead succumbed to the threats of the multinationals.

A press statement forwarded by groups like Global 2000, Friends of the Earth, Gaia Foundation, the Genetic Resources Action International ( grain ), Greenpeace International, Kein Patent auf Leben and Bundesverband Menschen fr Tiererechte said that the vote is seen to add to the mistrust of the European public towards European institutions and strengthen the impression that the European Union ( eu ) is only a union of European industries rather than a union of the European peoples.

Ricarda Steinbrecher, geneticist and spokesperson for the Women's Environmental Network, said, "This is a grim day for democracy. Our meps sold out to the pharmaceutical and biotech industry, which has been given what it asked for - leaving everyone else empty-handed." Steinbrecher alleged that meps ignored the advice of high-ranking scientists, doctors, genetic centres, independent patients groups and whole scientific bodies by deciding to declare genes inventions. She said, "We will not accept this, nor that human organs, plants and animals can be patented. There is something utterly wrong with our democratic process when only those who spend millions of pounds on lobbying are heard, leaving ngo s, charities and individuals without a chance."

Abby Munson, campaign director of the group Genetics Forum, commented, "With one hand the eu agrees to protect animals as sentient creatures formalised by the new protocol to be attached to the treaty of Amsterdam, yet with the other hand they take away protection by voting for the Biotech Patent Directive. mep's have just sold our animal kingdom to the highest bidder."

Unless the ep 's council of ministers changes the proposed directive in Parliament later this year, the patenting of lifeforms will become legalised in the eu. The new legislation would allow biotechnology companies to go into the Third World's fields and forests and come back home loaded with valuable genetic resources to patent them in Europe.The only small concession was that plant and animal patent applications have to specify the geographical origin and show that "the material was used in accordance with the legal access and export provisions in force in the place of origin." For human materials, the name and address of the person in question has to be speci-fied and the voluntary and informed consent of the person from whom the material is taken, has to be proved. Besides, farmers in the eu are allowed to replant patented seed, but only the smallest farmers are exempted from payment of royalties for this act.

One of the major implications of this event beyond Europe is that member states of the eu are now likely to stop their support to the Third World in fighting for the worldwide right to exclude the patenting of plants and animals under the World Trade Organization ( wto )-Trade Related Intellectual Property Rights agreement, which will be revised in 1999. Until now, mainly due to resistance from European countries, this agreement allowed wto members to prevent plants and animals from being patented. The us is already lobbying for the deletion of this right, and if there is no resistance from Europe, this small loophole for developing countries is likely to be lost in 1999.

Henk Hobbelink, director of grain said, "This is a major setback for all of us who have been fighting for the sustainable management of biodiversity in the hands of local communities. This is a critical moment in the long and crucial battle against the total privatisation of life's basic building blocks - and indeed life itself. If there is any positive conclusion to be drawn from our campaign, it is that we have managed to create a much broader understanding and awareness about the tremendous implications of the patenting of live forms. The response from civil society in Europe and elsewhere has been overwhelming and we will continue to help build resistance against what we consider as the last assault on the commons."

Liz Hosken, director of Gaia Foundation, maintained that with this vote, the ep has sold its citizens and those of the developing countries "to corporate rule". She said, "Allowing patents on living organisms is a violation of the tenets of democracy, human dignity and respect for living creatures with whom we share this planet. When the full significance of this vote is absorbed there can be nothing but outrage. We will resist this enslavement of life for profiteering to the bitter end. This is a critical test for humanity."