Assam Elections 2021: Are the poll promises made to protect Assam's environment viable? 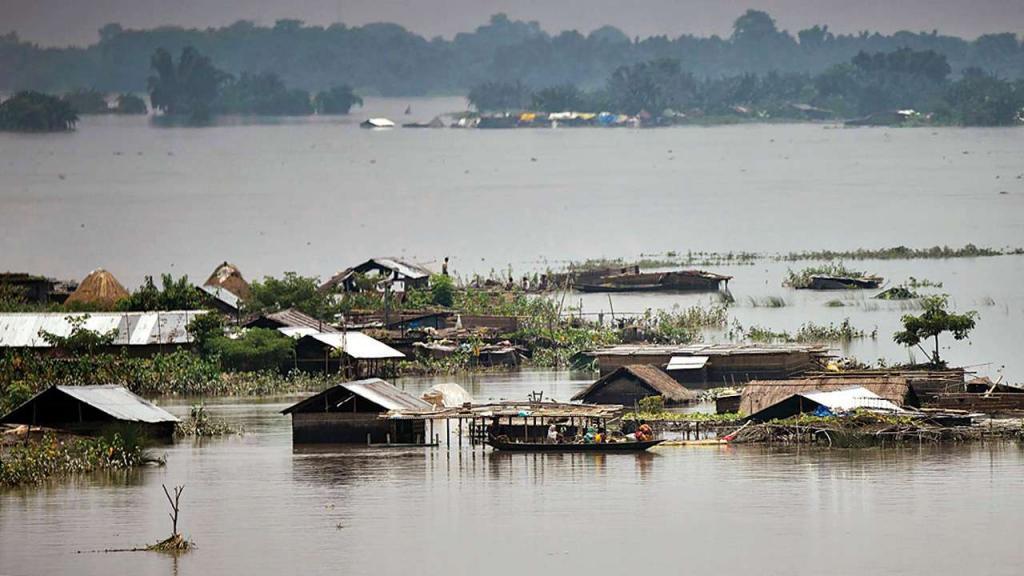 It is election-season in Assam: the first phase of polling is on March 27. All political parties in the fray are at it, trying to convince the voters. But has this political heat taken into the heat of a different, more literal kind?

Assam, like most states in the North East, has been sensitive to climate change. Deluge, deforestation and depletion of groundwater have disrupted lives and strained the economy here like in many other states. But have they made the electoral contenders take note?

Down to Earth scanned the election manifestos of the three major political parties in the fray this election for promises to bridge these environmental gaps.

The BJP assured that Assam would become “flood-free” in its manifesto released March 23, 2021. The Congress, manifesto announced a couple of days before that, handled the green issues as a side topic, without outlining specifics.

On March 19, the newly formed Assam Jatiya Parishad (AJP), vowed to find a permanent solution to soil erosion and floods, with a pledge to resolve the state’s complex tribal issues.

Experts, however, have pointed out that most of these promises are riddled with loopholes and are not holistic solutions, like they are made out to be.

Both the BJP and AJP manifestos listed a slew of measures to come up with a long-term solution for the recurring flooding in Assam.

The BJP intends to dredge the stretch of Brahmaputra from Sadia near Arunachal Pradesh to Dhubri near the West Bengal-Bangladesh border to tackle silting, which leads to floods.

But dredging merely treats the symptoms instead of the cause, said Narayan Sharma, a wildlife conservationist and assistant professor of environmental biology and wildlife sciences at Cotton University, Guwahati. He added:

Take the case of Guwahati. No matter how much you clean the drains, heavy rains every year clog the rains with silt or topsoil eroded from the hillslopes. So, as soon as the river is dredged, the sediments will flow into the Brahmaputra during heavy rains.

Moreover, large-scale engineering solutions such as dredging are often driven by commercial interests, overriding genuine concerns of flood relief, said Rajkamal Goswami, a conservation scientist at the Ashoka Trust for Research in Ecology and Environment (ATREE).

The latter was launched with the aim to reduce water pollution in Ganga and its conservation.

Sharma flagged the gaps in flood-control solutions in all the three manifestos and pointed out:

A flood-free Assam can never be a reality. If floods are a bane, they are a boon too. Annual floods are essential to Kaziranga’s ecosystem, the floodwaters help rid invasive plant species, maintaining their grassland status. Without floods, Assam would have to rely heavily on artificial fertilisers for agriculture.

Rather than trying to tame the river, a slightly better approach would be to control deforestation at the source of the river and its catchment areas, he added.

The BJP’s 2021 manifesto focuses on enhancing Assam’s forest cover by 35 per cent over the next five years if re-elected to power.

Experts have, however, expressed doubts about the feasibility of this promise. Goswami said:

A 35 per cent increase in the current forest area of 28,237 sq km would mean adding approximately another 10,000 sq km of forests. With increasing population and mounting pressure on land and resources, where will they go so much land to spare?

Expanding 1,000 green model villages and 100 towns under its “Seujiyagaon” and “Seujiyasohor” initiatives, the AJP made eye-catching greener promises.

Such afforestation drives are often blemished by corrupt practices such as promotion of commercial monoculture plantations that harm the biodiversity, land-grabbing and other form of corruption, Goswami said. Ecological restoration is thus preferred over afforestation drives.

The BJP did not grant scheduled tribe status to six communities Koch-Rajbongshi, Tai Ahom, Moran, Matak, Chutia and tea tribes. This was their poll plank ahead of the 2014 Lok Sabha elections as well the last assembly elections.

This time, none of the parties mentioned the implementation of the Forest Rights Act, 2006 that recognises the rights of the forest-dwelling tribal communities and other traditional dwellers.

“In Assam, the Forest Rights Act is a mere travesty,” said Sharma.

But the schedule is not a guaranteed safeguard for the forest or its people, reports have revealed.

In some cases, however, community beliefs are integral to preserving resources critical to the communities survival, Sharma said.

He cited the example of the fishing community of Keotpara on the fringes of Deepor Beel, a wetland in Guwahati. “A community fishing ritual involves not only killing fishes but leaving a few eggs to spawn so that the fish population can replenish itself through reproduction,” he said.

Tea workers are an important vote bank in almost 40 of the 126 seats. The BJP has promised a minimum daily wage of Rs 350 for them and the Congress aimed higher at Rs 365.

Rainfall in Assam reduced by at least a fifth in the past 60 years, the rainfall in Assam even as average temperatures rose 1.5 degrees. This impacted tea yield and triggered pest outbreaks.

While the Congress and the BJP’s manifestos centre around hiking tea prices, AJP’s manifesto pushes to establish Assam as an organic green tea hub in the country.

The goal might be too ambitious, said Sharma. “In the name of organic tea cultivation, you cannot indiscriminately use pesticides.”

A sustainable option would be to go for certifications incorporating climate-adaptive tea production practices and sociological factors like health, hygiene and education of tea workers, Sharma added.