Disposable diapers are also bad for the environment 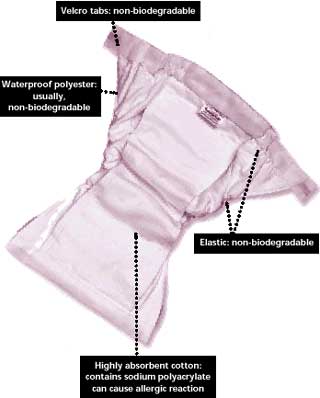 • A child needs 6,000-10,000 disposable diapers prior to toilet training. Soiled diapers are usually tossed into household, hospital or roadside garbage

• In the US alone, 18 billion diapers end up in landfills every year, adding 5 million tonnes of untreated human waste to the soil

• Each diaper can take up to 500 years to decompose. Almost 30 per cent of each diaper consists of non-biodegradable products such as absorbent vinyl layers, elastics, Velcro, absorbent gelling material in addition to plastic packaging

• As many as 100 viruses can survive in soiled diapers for up to two weeks including live polio virus excreted by recently-vaccinated babies. The germs constitute a potential hazard to sanitation workers and garbage handlers

• There is NO safe way to dispose of single-use diapers. Flushing them down the toilet causes 95 per cent of clogged sewer lines in the US, and creates 43,000 tonnes of extra sludge per year

• Each baby in single-use diapers consumes 4.5 trees (for making paper used in diapers) and puts two tonnes of solid waste into our environment (based on 2 years in diapers). An estimated one billion trees worldwide are used per year to make these diapers

• Disposables pose safety concerns for babies, who can pull these diapers apart and choke on plastic and pieces of lining

• Many doctors claim there is a rise in infections, especially in baby girls, as parents tend to change single-use diapers much less often than cloth diapers

• Studies by a leading US manufacturer of disposables show the incidence of diaper rash increases from 7.1 per cent to 61 per cent with the increased use of their product. The reasons for more rashes include infrequent changes, allergies to chemicals, bacteria, and ammonia from accumulated urine and faeces

• More than 60 per cent babies 4-15 months old in the US get diaper rash at least twice in two months. In tropical countries such as India, the incidence of rash will be more

• Sodium polyacrylate is the chemical that makes disposables super-absorbent -- it can absorb up to 100 times its weight in water. It can stick to baby's genitals, cause allergic reactions, and when injected into rats caused haemorrhage, cardiovascular failure and death. In the US, this chemical was removed from tampons in 1985 when it was linked to toxic shock syndrome

• Dioxin is a by-product of the paper-bleaching process used in manufacturing disposable diapers and is the most toxic of all cancer-linked chemicals. It causes effects like birth defects and liver disease in laboratory animals