According to the Nobel Laureate, 163 million children are living in severe drought-affected areas of the country

In a letter to Prime Minister Narendra Modi, Nobel Laureate Kailash Satyarthi has drawn the former’s attention towards the pitiable condition of 163 million children living in severe drought-affected areas of the country.

Satyarthi, who shared the 2014 Nobel Peace Prize with Pakistan’s Malala Yousafzai, has been working for child rights for many years and heads the Bachpan Bachao Andolan, a Delhi-based non-profit.

The organisation has demanded that children be given top priority in all kinds of relief and rehabilitation work in view of the prevailing drought.

“Children are (the) silent victims of natural disaster(s). This natural disaster has increased child labour, child trafficking, and child marriages in (the) drought-prone areas,” Satyarthi said. 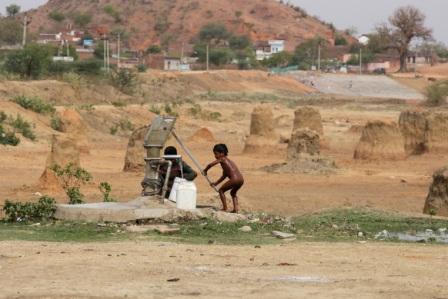 India is reeling under severe drought this year. It has badly hit 10 states, 254 districts and put at risk 336 million people.

According to the Union home ministry, more than 22,000 children have been reportedly kidnapped and around 36,000 are missing from 10 drought-affected states across the country.

“More than half of the total child marriages and child labour cases in India (have been reported) from these 10 droughts-affected states,” Satyarthi added.

Satyarthi said Maharshtra and Madhya Pradesh had been severely affected by drought and these two states constituted more than half of the number of missing children.

“Owing to drought condition in these states, in the coming months the (number of) missing children may increase manifold.”

No study on drought effect on children

Till now, no separate study has been conducted to assess as to how drought affects children in particular. Severe drought makes life in rural areas vulnerable where survival is a daily struggle for people. Children are often forced to drop out of schools and this makes them vulnerable to traffickers.

“We have not done any study regarding (the) impact of drought on children. But our preliminary assessment says that 40 per cent of (the) total (number of) children in drought-affected regions are vulnerable. The National Commission for Protection of Child Rights can take the initiative to document all facts in drought-hit areas,” Satyarthi added.

The Nobel winner said a Bundelkhand-based non-profit had assessed that there been a 24 per cent rise in child labour in the region in view of severe drought.

According to Satyarthi, funds under corporate social responsibility are not properly utilised and the money can be diverted to protect and rehabilitate children.

“Our assessment shows that more than Rs 10,000 crore are unspent which can be utilised at this point of time.”