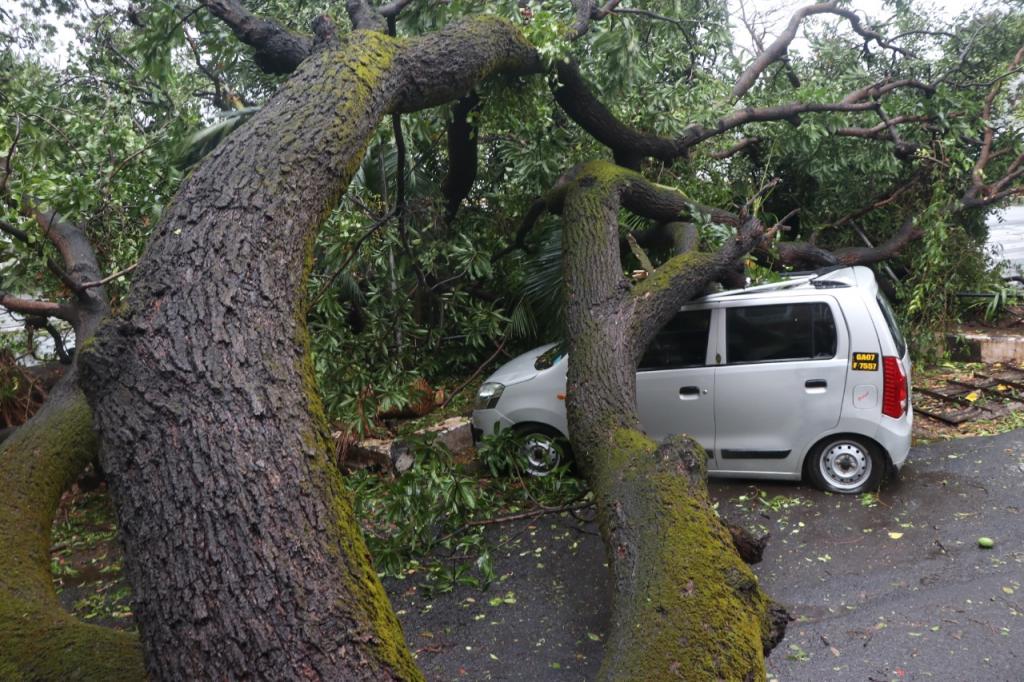 Heavy showers and continuous drizzle since the afternoon of May 19, 2021 brought down the temperature of Delhi 16 degrees below normal to 23.8 degrees Celsius, one of the lowest in the century.

The rains were brought in by the confluence of two weather systems over the north Indian plains that met after travelling thousands of kilometres from different directions, according to a press release from the India Meteorological Department (IMD).

The first of these systems was a western disturbance that travelled from the Mediterranean region over Iran, Afghanistan and Pakistan to reach Jammu and Kashmir.

The second was a remnant depression of Cyclone Tauktae that travelled from the south-eastern Arabian Sea near the Lakshadweep area and lay as low pressure area over Agra in Uttar Pradesh in the morning of May 20.

The interaction of the two storm systems, along with moisture incursion from the Arabian Sea, caused widespread rainfall throughout northern, north-western and central India.

Apart from its long journey over ocean and land, cyclone Tauktae held many surprises. It was only the third May cyclone to make landfall in Gujarat. The first was in 1900 and the second in 1976.

“It is likely that Cyclone Tauktae is the first Extremely Severe Cyclone (166-220 kilometres per hour) to reach very close to Mumbai in the last 130 years (according to IMD Cyclone eAtlas),” said Roxy Mathew Koll, a climate scientist at the Indian Institute of Tropical Meteorology (IITM), Pune.

Tauktae made landfall along Gujarat’s Saurashtra coast around 20 km north east of Diu late evening on May 17, leaving a trail of destruction in the other four states on the country’s western coast.

It decreased in intensity immediately but much more slowly than expected. “Usually cyclones dissipate very quickly after making landfall due to friction and also because warm, moist air supply from the oceans are cut off,” said Koll.

“Tauktae, however, maintained the cyclone status for 16-18 hours after landfall. It did not stop there. Its impact is reaching neighbouring states and countries in the form of winds and rainfall,” he added.

Cyclone Tauktae followed the trend of unusual and unpredictable cyclones since cyclone Ockhi in 2017 and underwent rapid intensification, making it difficult to forecast its severity.

“Tauktae intensified from a depression to severe cyclone in two days which is a new record. Previously, cyclones took four-five days,” said Raghu Murtugudde, a climate scientist at the University of Maryland. He added:

But the real indicator of its uniqueness is that the cyclone remained strong and stalled after hitting land. This was because of the warm ocean and the desert outflow from the excessive heating in neighbouring countries of Iran, Afghanistan and Pakistan. These conditions were also responsible for the recent string of cloud bursts in Uttarakhand.

Cyclones are enormous storm systems that are fuelled by moisture from warm ocean water. When they find warmer-than-usual pockets of ocean water, they intensify rapidly, making them difficult to be forecast with accuracy.

Rapid intensification is defined as an increase in maximum sustained winds by at least 55 kmph in a 24-hour period. “Such acceleration can only come with a rapid drop in the pressure in the eye of the cyclone,” said Murtugudde.

This is what happened in the case of Cyclone Ockhi in 2017 which claimed over 200 lives in Tamil Nadu and Kerala. It had picked up water vapour over the sea between Sri Lanka and Kanyakumari, and rapidly intensified from a depression into a cyclone in a span of 13 hours.

A similar phenomenon was also at play in two cyclones in 2018 that hit the Indian mainland — very severe Cyclone Titli and severe Cyclone Gaja — the IMD observed.

Both caused considerable damage in Odisha and Tamil Nadu, respectively. Many more cyclones after them, like the extremely severe cyclone Fani in 2019, the super cyclone Amphan and very severe Cyclone Nivar in 2020, have experienced rapid intensification. Cyclone Amphan grew to become the strongest-ever recorded in the Bay of Bengal.

Another factor in cyclone formation and rapid intensification is the Madden-Julian Oscillation (MJO), which is the major fluctuation in tropical weather on weekly-to-monthly timescales.

It can be characterised as an eastward-moving ‘pulse’ of cloud and rainfall near the equator that typically recurs every 30-60 days, according to the Bureau of Meteorology of the Australian government. Its impact was observed and later studied in both cyclones Ockhi and Fani.

Cyclones are likely to become deadlier due to ocean surface warming — an impact of human-induced climate change. Recent research papers have found clinching evidence for the correlation between rapid intensification of cyclones, their increased intensity and warming ocean waters even in usually cooler waters like the Arabian Sea.

Five of the eight cyclones that affected India in 2019 were in the Arabian Sea. Normally, the region undergoes only one cyclone in a single year. “(This) equals the previous record of 1902 for the highest frequency of cyclones over the Arabian Sea,” said IMD in its Statement on Climate of India During 2019.

In 2020, two out the five cyclones that were formed in the Arabian Sea. Both those cyclones were severe.

The north Indian Ocean region is exposed to six per cent of the world’s cyclones, according to a December 2020 pre-print paper submitted by Koll and Vineet Singh of IITM in Atmospheric and Oceanic Physics.

It found that sea surface temperatures (SST) prior to cyclones in the Arabian Sea are 1.2–1.4°C higher in the recent decades, compared to SSTs four decades ago. The report said:

Recent studies show that rapid warming in the north Indian Ocean associated with global ocean warming enhances the heat flux from the ocean to the atmosphere, and is fuelling a rapid intensification of these cyclones.

During Cyclone Amphan, which underwent rapid intensification, SSTs were around 32-33°C — one of the highest-ever recorded.

Circular ocean currents similar to whirlpools, known as eddies, also play a role in the intensification of cyclones, the paper observed. These eddies could be generated by winds or by density differences of ocean waters.

The frequency of very severe cyclones also increased in the Indian Ocean region by one per decade in the last two decades, according to Assessment of Climate Change over the Indian Region published by the Union Ministry of Earth Sciences on June 17, 2020.  This is despite a decrease in overall frequency of cyclones in the latter half of last century and the first two decades of 21st century.