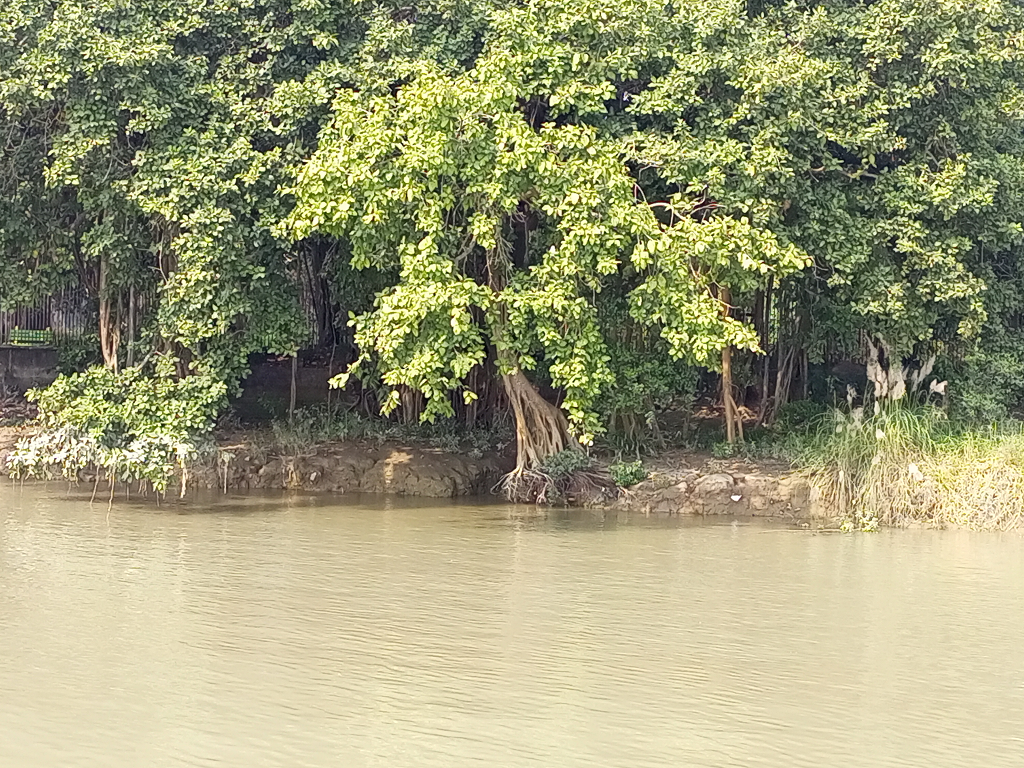 Parts of its fencing and inner plantation may get washed away by the swelling river, river and environment conservationists found during an inspection of the 1.8 kilometre stretch of the river bank lining the garden.

The garden is under the jurisdiction of the Botanical Survey of India (BSI) and the Kolkata Port Trust (KPT) has the jurisdictional command over length of the river from Farakka to Ganga Sagar. Both the organisations admitted the problem but said they have no fund to undertake remedial actions.

West Bengal government sources promised to investigate the matter but talked about the same constraint.

Environmentalist Subhas Datta and other experts who were on the inspection river cruise told this reporter that several trees along the perimeter as well as within the boundary of the garden have already collapsed or are on the verge of collapse due to severe erosion. The old concrete slabs adjacent to the garden fencing also seemed to have cracked at several points, he added.

“The situation has turned extremely grave in recent times, with the river eating away the land quickly,” said Datta. “Unless the relevant authorities from the Centre and state take immediate action to control the erosion, not only the national garden will be severely affected but also, nearby habitations within Howrah Municipal Corporation.”

He plans to move court seeking immediate actions to save the national garden.

The erosion has increased significantly in the last few years, observed Ujjal Mukherjee, retired chief scientist of West Bengal Pollution Control Board. “When we studied the area for Ganga pollution about a decade ago, we did not notice this extent and intensity of erosion.”

The river has encroached around 200 metres of the southern part of the garden, just beside a concrete jetty built around a decade ago, noted Datta.

BSI Director AA Mao admitted that the erosion has reached critical levels and claimed that the rate has quickened due to the jetty in the southern fringes of the garden. “River water keeps bouncing back from the concrete jetty, affecting the bank. That’s why the area closest to the jetty suffers the worst erosion.”

Locals like Hira Devi, who have been living in the nearby makeshift huts for close to five decades, also said that the erosion started since the construction of the jetty began.

Large barges also navigate close to the river bank, with Netaji Subhas Dock being located almost right opposite, said another expert. “This creates strong waves that seem to have quickened the erosion.”

Past BSI efforts to curb erosion didn’t bear fruits and the taxonomic research organisation doesn’t have the financial backing for more efficient measures.

“We earlier tried to have a mangrove plantation at the bank to counter erosion but most of the saplings got washed away during high tide,” the BSI chief said, adding:

Now we are planning to plant 5-6 feet tall mangrove plants. Bank protection with boulders and concretisation is also required but we do not have the money for this.

He told DTE on December 7, 2022 that he plans to write to the Union Ministry of Environment, Forest and Climate Change soon regarding the erosion-triggered vulnerability of the garden.

The officials of the concerned agencies kept passing the buck. “We can only manage the erosion of river banks close to major navigational channels and areas, as directed by the National Green Tribunal,” said a senior official of KPT.

Of the about 500 km of river stretch that is within our jurisdiction, almost 150 km is erosion-prone, they added. “We have no funds to address any river erosion. The garden authorities and the state government have to take responsibility.”

KPT will carry out an on-site investigation soon and provide technical help, if required, the official added.

"Though there may be causes for some local aggravation but several parts of the bank in Howrah side are erosion prone, especially the concave portions, observed Kalyan Rudra, river expert and chairman of the state pollution control board. "KPT should study the area hydrologically to explore solutions to erosion."

The cost of managing bank erosion is very high — around Rs 25 crore per km, another official of the port agency pointed out.

A few years ago, a tripartite committee was formed involving senior officials from KPT, the Inland Waterways Authority of India (IWAI) and the state irrigation department, they added. “It was decided that the cost of addressing erosion would be equally divided among the three.”

Both KPT and IWAI asked for funds from the Union government for stopping erosion but received nothing, the official shared.

A senior state irrigation department official also mentioned that there is a fund crunch to undertake any detailed remedial work. “I will soon send a team to assess the situation.”

He never heard about the erosion around the botanical garden since he took charge in Howrah.