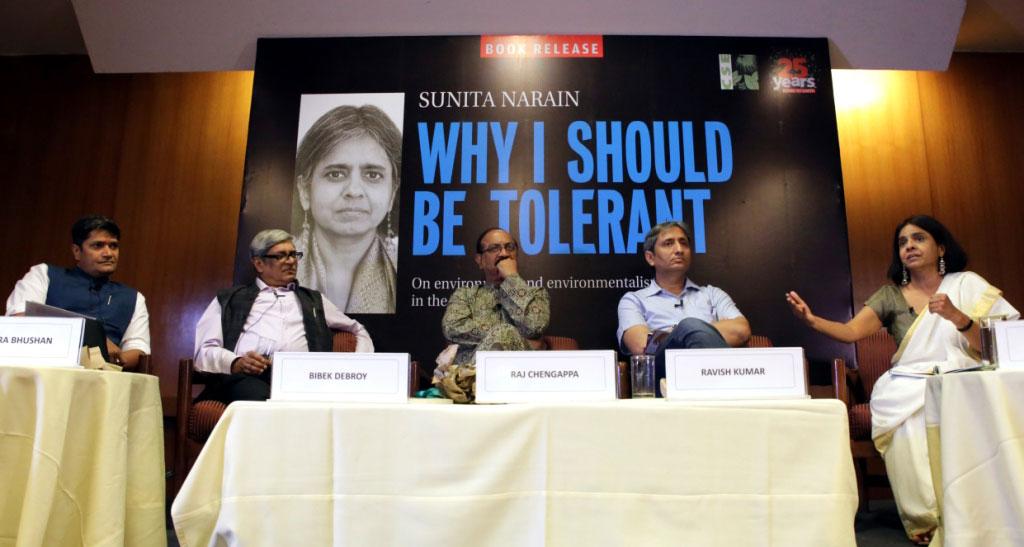 In the backdrop of growing intolerance towards inconvenient truths, Delhi-based non-profit Centre for Science and Environment (CSE), celebrating 25 years of Down To Earth magazine, launched a set of essays written by Director General of CSE and Editor of Down to Earth, Sunita Narain on the eve of World Environment Day on June 4. Aptly titled, “Why I Should Be Tolerant”, it has been described as “quasi-autobiographical book which chronicles the global development discourse from the 20th and 21st centuries”.

The book took shape about a year ago during the 2015 climate talks in Paris, while India saw protests against intolerance and the murders of social activists, informed the author. “In Paris, it was unbelievable to see how any narrative which was inconvenient was not there at all. Any country which was bringing up the concerns of equity or climate justice was ignored. The press reporting about the Paris climate talks was seconded by the government,” said Narain.

Panelists spoke about their association with CSE and Down To Earth and recalled how CSE has been an important pillar in India’s environmental discourse. The panel discussion started with Debroy’s propositions in which he summarised the concerns faced by policy makers on the environmental front. He said it was unreasonable that environmental protection norms articulated in developed countries, where average per capita income is US $ 40,000, were tried to be imposed on the rest of the world. “I find that unacceptable as a proposition just as I find it unacceptable that the norms that are devised in New Delhi for environmental protection are sought to be inflicted and impelled on states like Jharkhand,” Debroy added.

The economist expressed his concern on improper pricing of environmental benefits, and also talked about decentralisation of property rights. In his concluding remarks, Debroy spoke on sustainability, “Any attempt to define the word ‘sustainable’ today will amount to evaluating course and benefits on behalf of the future generation. Today, we are in no way equipped to figure out what the perceptions of course and benefits will be for future generations particularly because we have no idea what kind of technology they will have access to.”

Chengappa, who recalled his association with CSE from his days of reporting on the United Nations Conference on Environment and Development (UNCED) in Rio De Janerio in 1992, praised the essays for simplifying the complex scientific ideas and making them more accessible. He recalled many interesting revelations that CSE has been making for more than two decades starting from campaign against air pollution, waging a battle against soft drink manufacturer Coca-Cola, tracking pesticides in food products to recent findings showing carcinogens in bread. “Sunita (Narain) picks up something micro and ... gives it a macro perspective which makes us sit up and think,” he added.

On the environmental challenges faced by the world, Chengappa says, “The problems that we discussed in 80s, 90s or 2000s still exist with very few solutions.” He added that we thought some of these problems will be sorted with actions from governments and civil society. “However the problems remain. It’s a bit like ignoring a lump in your own body thinking that somehow it’s not cancer but as you get along you find that its malignant,” said Chengappa.

Television journalist Ravish Kumar, carefully mixing his wit with facts, spoke about farmer suicides, drought and smart cities. Kumar said that since the time when CSE started the campaign against air pollution, Down To Earth and CSE’s research has brought environmental awareness in people. He stated that the present government is turning already well-maintained cities into smart cities and cited the example of Chennai, where environmental violations are rampant despite the devastating floods last year. “Chennai witnessed floods last year. When I was looking at these pictures it seemed like all the educated people encroached upon the flood plains. All the educated people were drowned by flood waters. When the elections happened, all the educated ones forgot about these issues in Chennai. Now all of us, the educated ones are back here for Sunita to remind us again. We read, we know but we still forget,” Kumar said while urging that the inconvenient messages from experts have to be taken into account by the state.