Heat of the matter

Skeptics lose their main foothold in the global warming debate 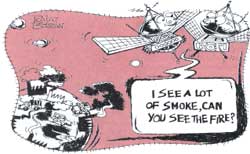 ASK the top brass of any oil or coal firm about global warming, and they are likely to dismiss it as a well-imagined theory cooked up by a handful of ardent environmentalists. In recent years these people have taken great pains to acquire satellite data that apparently show how the Earth, contrary to the environmentalists' doomsday prophecies, is cooling slightly. Environmentalists usually counter their argument by recounting measurements taken at Earth's surface which indicate that temperatures have risen by 0.3 c to 0.6 c since the mid-19th century. This, they point out, is a big rise compared to the previous long-run changes in the climate.

However, the satellite data one of the last props supporting the critics of global warming is not all that accurate. Scientists say no one had noticed that the satellites had been slipping from their original orbits, giving incorrect and misleading readings.

The data in question came from several satellites called microwave sounding units operated by the National Oceanic and Atmospheric Administration (NOAA). They seemed to show that the Earth's lower troposphere, at an average height of about 3.5 km, had cooled at a rate of 0.05 c per decade since 1979.

All the existing greenhouse computer models could not account for this slight cooling in the lower troposphere and emerged as a major sore point for climate researchers. Greenhouse critics have hailed it as a fatal flaw in theories of global warming.

However, Frank Wentz of Remote Sensing Systems at Santa Rosa in California, USA, became suspicious of the satellite data, since they also showed the lower troposphere was cooling much more than the middle troposphere. "That result was puzzling," he says. "It didn't agree with anything." Both balloon observations and greenhouse warming models had suggested there should be more cooling at higher altitudes. Wentz and his colleague Matthias Schabel found that no one had accounted for the gradual slippage of the satellites from their orbits over time. Atmospheric friction would have dragged the satellites down especially during 1979 to 1983 and 1989 to 1992 when the Sun was particularly active, making the lower atmosphere more dense.

On an average, the satellites would have fallen in altitude by 1.2 km every year. These orbit changes would have altered the angles at which the satellites viewed the atmosphere. Taking these changes into account, Wentz and Schabel found that the mysterious cooling trend was actually a warming trend of 0.07c per decade, "The effect is real,11 agrees John Christy of the University of Alabama at Huntsville, USA, who had earlier reported the cooling trend. However, he says that in checking Wentz's analysis he found three factors which compensate for orbital decay, leaving an overall cooling of 0.01 c per decade.

Christy's recalculations have noi been made public or reviewed. Kevin Trenberth of the National Center of Atmospheric Research in Colorado, USA. says it is "totally ridiculous" that Christ) claims to have found "another correction, which happens to compensate".

The satellite cooling data have been among the strongest arguments against global warming. Balloon observations have recorded a slight cooling at the same altitude, but the results were blurred by a large margin of error. Dian Gaffen of the NOAA'S Air Resources Laboratory in Silver Spring, Maryland, says that all measurements suffer as they were designed for weather forecasts; what we need, she says, is detectors designed for monitoring global climate.

In a related paper, James Hansen and his colleagues from the us National Aeronautics and Space Administration's (NASA'S) Goddard Institute for Space Studies in New York say they believe the new data will stand the test of time. "The issue should no longer be whether global warming is occurring but what is the rate of warming, what is its practical significance, and what should be done about it," they say.