Normal monsoon prediction comes as relief amidst drought in south

This time, the IMD has not clarified what the probability is of the country getting below normal or deficient rainfall 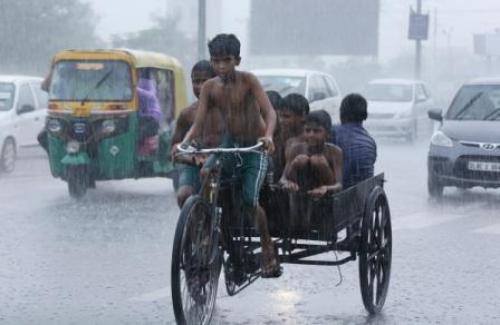 The India Meteorological Department (IMD) issued the first stage long range forecast of the Indian summer monsoon, predicting normal rains for the country. The news brings cheers to farmers facing crop failure in the southern part of the country. According to K J Ramesh, IMD chief, the normal spatial distribution is likely to follow climatological patterns.

Going by the predictions, there is 38 per cent probability as of now of near normal rains. The June-September monsoon is likely to be 96 (+ or - 5) per cent of the long-period average. The second stage long-range forecast will be released in the first week of June. The monsoon is particularly important in view of India's agrarian economy. However, this time, the IMD has not clarified what the probability is of the country getting below normal or deficient rainfall.  Also, this the first year the monsoon mission coupled forecast system was used to make the predictions.

Currently drought is prevailing in the southern states. The worst-hit state is Tamil Nadu where every district is reeling under drought due to the failure of the northeast monsoon in 2016. Also, there are alarming reports of farmers’ deaths. About 144 farmers have reportedly died in the past three months due to crop failure.

According to the data by the Regional Meteorological Centre, most districts in Tamil Nadu witnessed deficient rainfall from October 1 to December 31, 2016. Districts such as Cuddalore, Namakkal, Puducherry, Karaikal, Salem, Erode, Nagapattinam and Karur received 70 to 80 per cent deficient rains during the three-month period.

The situation in Karnataka is similar. The state is staring at a severe drought for the second consecutive year. Uttara Kannada, Udupi and Dakshina Kannada districts in the Malnad region generally receive heavy rainfall (4,000 mm) every year. However, for the first time, these districts have been listed under drought-hit districts. Nine of the 12 dams have water storage at just less than 20 per cent of their capacity, while storage level at three others—all of them in the Malnad region—are less than 50 per cent. (Read on how Karnataka is reviving millet cultivation.)

The El Niño Southern Oscillation (ENSO) is an osciallatory variation of sea surface temperature in the Pacific Ocean which influences atmospheric processes across the globe. The El Niño expands as a tongue of above-normal temperatures that extend from the west coast of South America to southeast Asia.

The Indian summer monsoon is typically suppressed by El Niño events. Currently, the ENSO is in a neutral phase but is in the midst of a transition from La Nina (cooling phase) to El Niño (heating phase). According to the IMD, a positive Indian Ocean Dipole may help offset the ENSO effect.

According to the latest bulletin issued by the National Oceanic and Atmospheric Administration, neutral conditions are likely to persist in April-June, though some dynamic models predict the onset of El Niño in this period.

In case El Niño conditions emerge before September, there is a good chance of the latter half of the Indian monsoon being influenced by it. Private forecaster Skymet had earlier issued “below normal” forecasts for the 2017 monsoon.