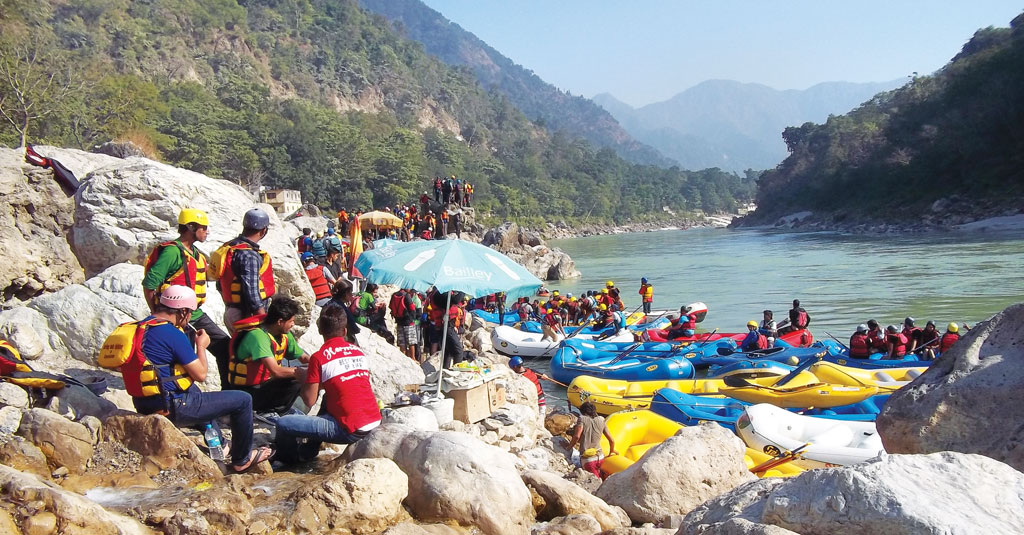 The number of rafting camps on the Ganga between Shivpuri and Rishikesh has increased 90 times in the past decade (Photo: Rajit Sengupta)

Ahead of the rafting season in Uttarakhand, the debate over its impact on the environment is heating up again. At the core of this debate is the ban imposed by the National Green Tribunal (NGT) on white water rafting in the state. The controversy began this March when Uttar Pradesh-based non-profit Social Action for Forest and Environment (SAFE) filed a case with NGT, saying that the activity was harming the environment. Vikrant Tongad, president of SAFE, says camping activities destroy forest and wildlife, and pollute the Ganga. According to him, there are 800-1,000 camps that dump solid waste in the river and temper the slope of the riverbank. Trees are also felled to set up camps. Such activities are in contravention of the Forest (Conservation) Act, 1980, the Environmental (Protection) Act, 1986 and the Water (Prevention and Control of Pollution) Act, 1974, he says. SAFE also complains about poor sanitation practices at the camps, which have pit toilets but the pits are not dredged properly and the faecal matter flows directly into the river.

The white water rafting industry has grown at a rapid rate in Uttarakhand. According to the Uttarakhand Tourism Development Board (UTDB), the number of camping and rafting agencies in the state has seen a five-fold increase in the past decade—from 27 in 2004 to 140 at present. According to SAFE, the number of rafting camps on the Ganga between Shivpuri and Rishikesh has increased 90 times in the past decade. A study by the Hemvati Nandan Bahuguna Garhwal University in 2011 says that tax collected by the government from white water rafting-related activities has risen from less than Rs 5 lakh in 2000-01 to more than Rs 35 lakh in 2010-11. Eco-tourism has also helped generate employment. Partha Sarthi Mahapatra, a researcher with the Forest Ecology and Environment Division, Forest Research Institute, Dehradun, estimates that the river rafting industry has increased employment opportunities in the state by 40 per cent. According to Vaibhav Kala of Aquaterra Adventures, a Delhi-based operator, around 5,000 people from the state are employed by the industry in riverside camps.

Commercial rafting in the state started in the 1980s on the river Ganga, says Yousuf Zaheer, president of Himalayan River Runners, one of the first operators to enter the rafting business in Rishikesh. The industry was promoted by the government but they did not take any precautionary measures to protect the environment, says a government official requesting anonymity.

The registration process for operators is quite simple. They first have to get a licence from UTDB and then a no-objection certificate from the forest or local magistrates for camping. The state government started issuing licence in 1990 and the licences are renewed every year. The Uttarakhand government passed an order in 1993 to allow camps only at specific areas in the forest. But the number of camps after 2000 spiralled out of control due to mismanagement and government’s ad hoc licensing policy, say forest officers from the area.

In response to SAFE’s campaign, the Indian Association of Professional Raf-ting Outfitters (IAPRO), which has 70 rafting and camping operators in its fold, filed an online petition in June addressing NGT. IAPRO says that the main problem is the ad hoc NOC issued by gram sabhas, forest department and the local magistrate. It also says that UTDB did not issue any guidelines for setting up camps when they revised the licensing guideline for rafting last year.

Is banning the solution?

According to SAFE, nothing short of a complete ban would work because rafting activities are difficult to manage or monitor. Zaheer, on the other hand, says that instead of banning the activity the government should think of dealing with the problem. He says the government has not even laid out any selection criteria for choosing good operators. Monish Mullick, Chief Conservator of Forests (Administra-tion), Forest Department, Uttar Pradesh, also says that ban is not the solution. There should be checks and the number of the camps should be decided on the carrying capacity of the area, he says.

However, Rahul, Divisional Forest Officer, Muni ki Reti, Rishikesh, agrees with SAFE. He says the main reason behind the degradation of the river is wrongly designed pit latrines.

“In our guideline, the camps should have dry pit latrine but many are using the flushing type. There is no control over this,” he says. Rahul adds that the area is also dotted with ashrams, hotels and guest houses. Due to absence of any sewage treatment facility at Shivpuri, the sewage from these places is dumped directly into the river.

Zaheer says that there is another aspect to the controversy—the PIL in NGT is only a way to get the smaller operators out of the business because the state government wants to allow only three-four big players. He says that this politics of throwing the small operators out started around 2006. Since then the state is looking for public-private partnership with big players who can start large commercial projects, such as resorts or parks, in the area. If the government is worried about the environment, why is it ignoring the harms caused by the hotels and ashram, which are permanent structures, along the river, ask the operators.

Rahul says no new permission is being given for camping in forest areas at present. Even old permissions are not being renewed till NGT gives its verdict on the case.

Till that happens, the fate of rafting in Uttarakhand hangs in balance.