Nitrogen dioxide (NO2) levels in capital Delhi increased as lockdown 3.0 kicked in on May 4 to control the novel coronavirus disease (COVID-19) spread. As offices were allowed to reopen with 33 per cent staff, personal vehicles came out on roads in increased numbers as compared to the second phase of lockdown.

Centre for Science and Environment (CSE) carried out a quick assessment of Delhi’s air quality to see how the spurt in personal vehicular movement impacted NO2 levels. This is because vehicles are among the key contributors of NO2.

CSE analysis tracked hourly and weekly change in NO2 levels in Delhi between lockdown-2 and lockdown-3 to indicate the influence of traffic on air quality. The data was based on 25 out of 38 stations.

Stations excluded were those that were either not working during the study period or didn’t have complete data.

The time considered was:

Evidence was sharp. A change in 24-hour average between the two weeks showed that the overall weekly average level increased by 19 per cent. Increase was higher on weekdays compared to the weekend. 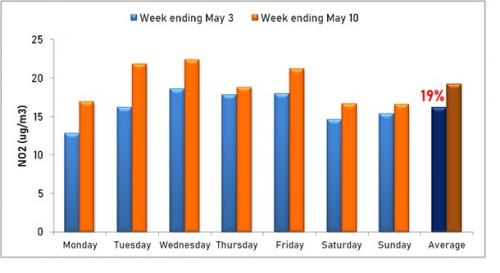 Change in daily NO2 level between lockdown-2 and lockdown-3. Source: CSE analysis based on CPCB data

The variation was wide, according to monitoring locations. The steepest increase in weekly average between the two phases was observed at Sri Aurobindo Marg (108 per cent), Karni Singh Shooting Range (60 per cent), Lodhi Road (60 per cent), and RK Puram (54 per cent).

All these stations are located on major arterial roads, and are therefore sensitive to change in vehicular pollution.

Other stations, too, registered an increase in the range of 7-50 per cent, except ITO and Narela. These experienced marginal drop in NO2 levels, reasons for which were not investigated as part of this analysis.

An additional analysis of hourly trend for two weeks showed that the peak in NO2 pollution increased during lockdown-3 by 35 per cent. 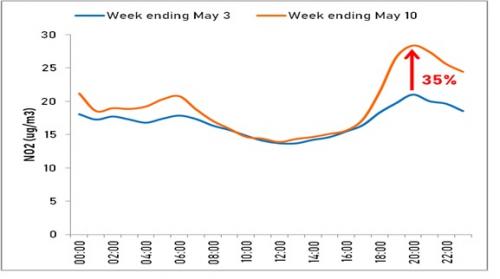 Change in hourly NO2 level between lockdown-2 and lockdown-3. Source: CSE analysis based on CPCB data

This assessment was part of CSE’s quick air quality trend tracker during COVID-19.

The policy situation is currently very fluid. Decisions related to lockdown are dynamic. This is expected to have some bearing on the air quality trend in our cities.

A quick tracker of trend-based on the real time data of the Central Pollution Control Board helps to watch the ever-changing indicator.

Change in the hourly pollution due to reduced traffic and similar analysis for other cities were also done as part of this micro-analysis series.