China’s Three Gorges dam faces the biggest test of its flood control capacity as heavy rains swell the rivers that feed it. The dam was pushed through by the government despite environmental concerns. Environmentalists fear the dam could create an ecological disaster, with landslides and erosions downstream. Hundreds of people have died in the country's worst floods in over a decade.

Israel’s health ministry recommended the government halt baptism in Jerusalem’s lower Jordan River where tradition holds that Jesus was baptised, saying its waters are dangerously polluted with raw sewage and agricultural chemicals. About 100,000 people visit the holy site every year.

Iran’s parliament passed a bill authorising Tehran to prepare 20 per cent enriched uranium fuel—suitable for medical research. The West fears Iran is preparing nuclear weapon on the pretext of research. The bill, Combating US and British Plots to Protect Nuclear Achievements, says Iran must retaliate against sanctions by the West.

Russia announced nine nature reserves and 13 national parks, nearly the size of Switzerland, for its endangered species including polar bears, walruses and sea otters by 2020.

The Baghdad provincial government is culling 1.25 million stray dogs following complaints they are spreading disease and setting upon residents. The problem has been exacerbated by mounting garbage.

A Dutch court fined multinational oil trading firm, Trafigura, US $1 million for illegally exporting tonnes of toxic waste to Amsterdam port in 2006. The ship then went on to unload the cargo in Ivory Coast where it killed scores of people and sickened 30,000. The African government exonerated the firm after compensation.

Ethiopia said its forest cover has tripled, from 3 per cent in 2000. Known for droughts and famine, the country has in recent years undertaken tree planting to help check land degradation and improve biodiversity.

The supreme court of Belize in Central America recognised the customary rights of its early settlers, the Mayans, and asked the government to withdraw all leases and contracts allotted on their land.

Brazil amended a 1965 forest code that required landowners in the Amazon rainforest to leave 80 per cent of standing forest untouched. Green groups say the amendment would spur deforestation.

Following public protests, New Zealand dropped its plans to open 7,000 hectares of protected areas for mining. The move would have threatened rare species.

Conservationists in the UK have asked people to help track butterfly. They fear the population of native species has declined by three-quarters. Butterflies are sensitive to environmental changes, said organisers of the Big Butterfly Count.

Five US states have gone to court demanding the federal government take emergency measures to block the invasive Asian carp from entering the Great Lakes. The states also want to close the Chicago shipping route temporarily and study if the Great Lakes can be separated from Mississippi River, where the carps have made themselves at home.

The US modified its copyright law making it legal to hack smartphones such as the iPhone to switch telecom service providers or install applications without Apple’s approval. Apple said hacking would open handsets to security holes and viruses.

IBM developed a watercooled supercomputer, Aquasar, which consumes 40 per cent less energy than a regular air-cooled system. It also absorbs the heat generated by other servers and feeds it to the building’s heating systems. IBM said Aquasar helps reduce carbon emissons by 85 per cent.

Farmers whose crops are raided by wild animals like elephants should drive them away with pepper spray, guard donkeys or booby trapping food with snakes, said the UNFAO. 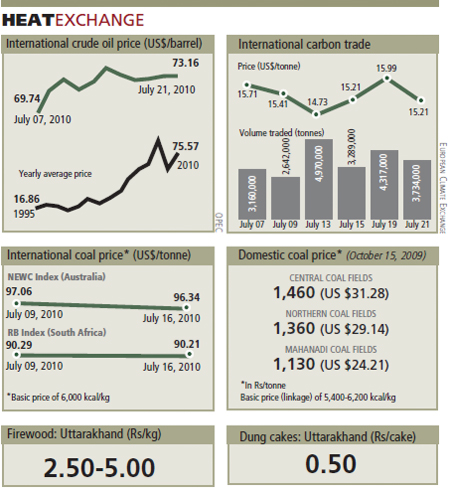