Politics in the time of Cholera

At least two were killed in a protest against Nepali UN peacekeepers, whom many Haitians blame for introducing cholera to the quake-ravaged country. The UN denied this and said the violence happened during election campaigning. It has since halted aid flights and a water-chlorination campaign. The cholera virus, identified as a Southeast Asian strain, claimed more than 1,100 lives and infected 18,000 by November-end.

Greenland has demanded US $2 billion from companies that want to explore its Arctic waters for oil to ensure there is enough fund to cover clean-up costs in the event of a large oil spill. About half a dozen energy companies, including Shell and Cairn, want to drill 50,000 sq km of unexplored waters.

London sprayed its roads with a dust suppressant to tackle air pollution. The city is close to breaching EU legal limits for particulate matter (PM 10). The city authority hopes the suppressant, made from calcium magnesium acetate, would reduce the pollutant by 20 per cent.

French president Nicolas Sarkozy signed pension reform into law. The law will raise the minimum retirement age and the fully pensionable retirement age by two years, to 62 and 67, respectively. Protests at having to work an extra two years by the public led to blocked roads and disrupted train travel.

South Africa’s nuclear scientists devised a way to create molybdenum-99, used in medical procedures to fight cancer, from low-enriched uranium. So far scientists used high-enriched uranium, used to make nuclear arms, to create the element. Though the new technology is more expensive, it could ease global worries about nuclear trafficking.

Ugandan president Yoweri Museveni has allowed a private firm to build a golf course and swimming pool in the country’s biggest national park. Murchison Falls, a 3,800 sq km park, is a popular tourist destination. The east African economy attracted about 800,000 foreign tourists in 2009. Environmentalists said the move would escalate poaching and disrupt movement patterns of animals.

Hong Kong reported the first human case of bird flu in more than seven years. A 59-year-old woman developed the symptoms after visiting mainland China. Hong Kong was the world’s first place to report human bird flu in 1997, when six people died of the disease.

The world’s largest biodiesel plant in Singapore has started production. The plant, with an annual capacity of 800,000 tonnes, can use any vegetable oil and animal fat to produce biodiesel, considered less polluting than fossil fuel. Green groups say increased demand for biofuel crops leads to food shortages and deforestation.

Afghanistan has allowed China to explore a copper mine near Kabul which lies beneath a 2,600-year-old Buddhist monastery. The Afghan mining ministry estimates the deposit contains 5.5 million tonnes of copper and may yield the government US $1 billion in annual revenues. Archaeologists from around the world are protesting the move.

Brazil’s national development bank has set up a US $588 million fund to finance projects that will do business or agriculture on degraded land. This will lower pressure on the country’s forests and check deforestation. The announcement comes a month after the government auctioned parts of its Amazon rainforest to private firms for logging.

Costa Rica sued Nicaragua in the international court in the Hague over a dredging project in the San Juan river, which borders the two countries. Costa Rica alleged that Nicaragua is dumping river sediments on its land and clearing forests on its protected wetlands.

Australia will begin exploration activities in central Sydney for natural gas. The move could alleviate Australia’s dependence on coal power. Residents fear the chemicals used to force gas to the surface would contaminate water.

The UN Food and Agriculture Organization predicted the global cost of food imports would reach US $1.026 trillion this year, a 15 per cent rise from 2009. Supply shortfalls in grains have raised commodity prices. It warned of harder times ahead if production does not rise in 2011. 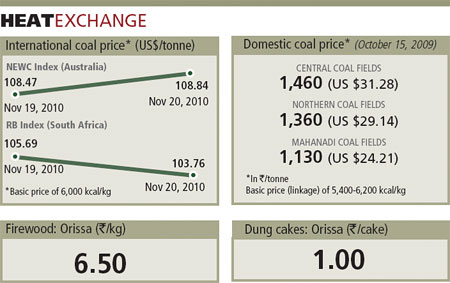