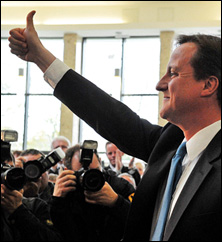 AIM: TO BE THE GREENEST

Three days after assuming office on May 11 as the prime minister of the UK, David William Donald Cameron, 43, said his government would set itself a target of slashing carbon emissions by 10 per cent over the next 12 months. All government departments would now be required to publish information on their energy use online to ensure the public can hold ministers and civil servants to account.

African leaders will not force industrialized countries to give US $30 billion to them as agreed during the Copenhagen climate change talks. But if they do not get the money they will not participate in any future negotiations, derailing the efforts for a binding treaty, said Meles Zenawi, Africa’s top negotiator and Ethiopian prime minister.

An Interpol-coordinated wildlife crime crackdown seized 400 kg of ivory and rhino horn, worth US $1 million, at the Mozambique-Swaziland border.

The Central African Republic has ratified International Labour Organization Convention 169 on the rights of indigenous people . It is the first African country to do so.

Namibia banned the export of all meat products following the outbreak of Rift Valley fever. The authorities suspect the disease, which usually affects livestock and can pass on to humans, has spread from South Africa.

Indonesia said corruption by 470 companies in the forestry sector has cost the government over US $100 billion. The companies misused forest permits and destroyed forests for mining, it said. Green groups say 55 per cent of Indonesia’s timber is harvested illegally.

An unknown fatal disease is spreading among critically endangered Saiga antelopes in Kazakhstan, already at extinction risk from poaching and habitat loss. The authorities said no other animal is affected by the disease and launched a probe.

Two subsequent explosions at a mine in Siberia killed about 90 miners and rescuers. Union leaders said the mine authorities follow poor methane management technology, which resulted in the buildup of methane gas and caused the explosion. The mine’s director faces criminal prosecution.

As the Icelandic volcano, Eyjafjallajokull, kept spewing ash for more than a month, British aviation regulators introduced relaxed flight safety rules that will allow planes to fly in thicker volcanic ash. Airlines must get a guarantee from their engine-makers that their aircraft can safely tolerate the ash, said the regulators.

Canada extended its seal hunt season by a month and increased catch limit from 50,000 to 330,000 as hunters shy away from the sea due to a EU boycott of seal products and lack of sea ice that harbours seal pups. This year Canada has seen the warmest winter on record.

To pacify Ecuadorian indigenous people protesting a bill that aims to privatize water , the government said it will hold a non-binding vote among the people.

Argentina imposed a two-month fishing ban on its waters to save the hake fish from extinction. It asked the fleet to remain on port until the hake stock replenishes; the catch early this year was 35 per cent lower than 2009. The fishing industry risks losing half its export market.

About 6.8 million people worldwide were displaced in 2009 by long-running conflicts, pushing the number of refugees to 27 million—the highest since the mid-1990s, said Internal Displacement Monitoring Centre, Geneva.