Villagers of Dhinkia in Odisha’s Jagatsinghpur district passed a resolution at a Palli (village-level) Sabha, to not allow a proposed steel, cement and captive power plant by Sajjan Jindal-led JSW Utkal Steel Ltd on their land.

The project was proposed to spread over 2,900 acres, which was previously acquired for the steel project of South Korean steel major, POSCO. After the South Korean steel company shelved its project, the state government brought entire land parcel under its land bank scheme.

At the Palli Sabha on February 25, 2020, villagers talked of their long-standing residence in the area and their traditional dependence on the forest land. They also stated their rights under the Scheduled Tribes and Other Traditional Forest Dwellers (Recognition of Forest Rights) Act, 2006, and refusal to grant consent to diversion of forest land for the proposed power plant.

“We submitted a notice to the sarapanch, informing him about the date and place of the sabha on January 26, 2020,” said Debendra Swain, panchayat samiti member of Dhinkia gram panchayat.

“Many villagers unanimously passed the resolution saying the forest land should not be diverted in favour of Jindal limited. They signed the resolution,” said Chandan Mohanty, a Dhinkia resident.

“The district administration violated FRA by not organising any palli sabhas. But Dhinkia villagers organised one and refused to give land to Jindal. We have had forest rights for more than 75 years,” added Mohanty.

According to Muralidhar Sahoo, a villager: “Under the FRA, no forest land can be given to anyone until all rights are recognised and consent given to the project. This is the requirement of the law, acknowledged by an environment ministry order of August 3, 2009.” 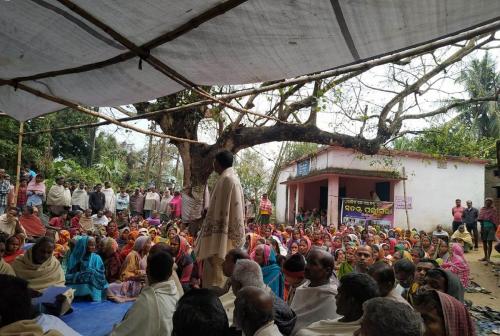 At the palli sabha in Jagatsinghpur district. Photo: Ashis Senapati

The South Korean company POCSO had signed a memorandum of understanding in June 2005 with the Odisha government to construct a 12 billion dollar steel plant. Various regulatory delays and controversies prevented the company from starting construction.

The government on 2 June, 2017 decided to transfer the land to JSW steel limited to establish a steel plant.

According to Prafulla Samantray, activist and state unit president of Lok Shakti Abhijan, “the government did not feel it necessary to consult people over the fate of land after POSCO’s withdrawal.”

“This speaks volumes about the state of grass root democracy in India, particularly about the status of constitutional safeguards and empowering acts. According to the Right to Fair Compensation and Transparency in  Land Acquisition, Rehabilitation and Resettlement Act (LARR), 2013, the land acquired and possession taken over, but not utilised within a period of five years from the date of possession, shall in all cases revert to the original land owner,” he added.

According to Hemant Behera, a betel vine farmer of Dhinkia: “The government is trying to illegally hand over the land to Jindal. The fate of around 40,000 farmers, including betel vine growers, is hanging in balance."

All villagers echoed the same sentiment, saying they should get their land back.

"The Scheduled Tribes and Other Traditional Forest Dwellers (Recognition of Forest Rights) Act, 2006, is a result of the protracted struggle by marginal and tribal communities of our country to assert their rights over forestland,” said Chita Das, another villager.

However, Kanhu Charan Dhir, additional district magistrate of Paradip, said: “Authorities acquired land legally by paying proper compensation to villagers. They have no legal right to reoccupy the land.”