The images shared by NASA show the terrain of the land — that looks like a giant claw scraped across its surface — between April 1 and June 11, 2020. The ‘scratch’ marks are the result of tectonic forces that folded rock layers and created shallow valleys filled with pine forests and lakes in the region.

The images — captured using data from NASA’s Moderate Resolution Imaging Spectroradiometer — show many changes, apart from the loss of snow and ice cover.

The forested valleys of the region appear dark green compared to the lighter green and brown farmland that surrounds them. 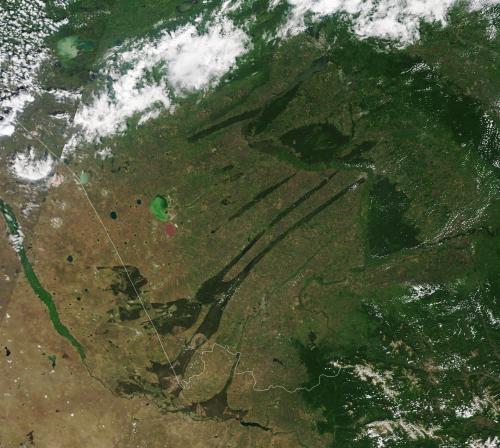 The most interesting phenomenon witnessed, however, is the change in colour of the region’s lakes. The colour of Lake Kuchukskoye shifts from green to pink, a phenomenon seen in other lakes in Russia’s Altai Krai district as well.

The aquatic population in the lakes — including brine shrimp and salt-loving Halobacteria — increases during the seasonal changes, which results in these lakes changing colour, according to NASA’s Earth Observatory.

The water becomes salty during July and August due to hot and dry weather, increasing the rate of evaporation and lowering water levels.

The lakes turn into flamingo shades of pink at this time, because of these factors. A prolonged heat wave in Siberia results in Kuchukskoye’s water turning pink by the last week of June or the first few weeks of July itself, according to NASA.

This year, however, the colour change occurred earlier than usual in the third week of May.

The grasslands in the valleys have a history of being a significant food producer for Russia. Intensive farming during the Soviet era led to soil erosion in the area. The region’s farmers, however, still manage to grow a number of crops, including buckwheat, flax, peas, soybeans, sugar beets and sunflowers.