The surprising effect of ocean waves on global climate 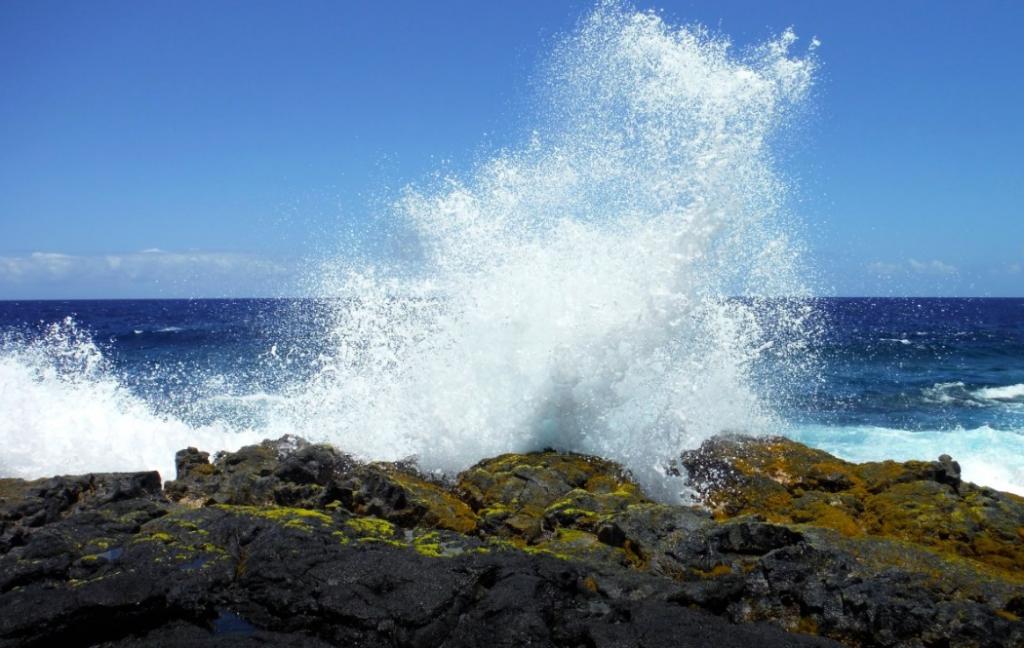 Sea spray aerosol was thought for a long time to be just salt — sodium chloride — and that’s not true. Credit: pxhere

Breaking waves are the stuff of romance and poetry, but the spray they generate is serious business. Just ask Vicki Grassian, who thinks about what crashing waves mean for clouds and, ultimately, our ability to understand and adapt to our changing climate.

In more than 20 years as a professor in the University of Iowa’s chemistry department, Grassian earned the title “dust queen” for her studies of how mineral particles make their way from land into the sky. The specialized tools and expertise required to study dust eventually drew her to the Department of Chemistry and Biochemistry and the Scripps Institution of Oceanography at the University of California, San Diego, where investigators have spent much of the past decade tackling a tantalizing question: How does the ocean affect Earth’s atmosphere?

At first glance, the answer would appear to be simple and obvious: Water evaporates at the surface of the sea, eventually rising to form clouds. Grassian, now distingished chair of physical chemistry at UC San Diego, focuses on a far more complex picture: Wave action creates microscopic particles suspended in that vapor, an amalgamation called aerosols.

Depending on their chemical makeup, aerosols influence the physical properties of clouds, such as their ability to absorb sunlight or trap heat — which makes aerosols of interest to anyone trying to understand climate.

Unfortunately, aerosols are hard to study. Just how hard can be seen at Scripps’ Center for Aerosol Impacts on Chemistry of the Environment, which Grassian co-directs with Kimberly Prather, distinguished chair in atmospheric chemistry at UC San Diego. The centerpiece of CAICE is a glass-walled flume of water the length of a bowling alley that creates breaking waves — a controlled source of sea spray. A number of instruments are attached to the flume, from a mass spectrometer that assesses aerosols in flight to barriers that capture particles in neutral substrates so they can be examined in detail.

“Sea spray aerosol was thought for a long time to be just salt — sodium chloride — and that’s not true,” says Grassian. “There’s a lot more that comes out of the water — viruses, bacteria, organic compounds, parts of cell walls — little ‘bio bits,’ if you will.”

Grassian’s and Prather’s research findings are valuable news for investigators such as Paul DeMott, a senior research scientist in the atmospheric chemistry program at Colorado State University, and Susannah Burrows, an atmospheric scientist at Pacific Northwest National Laboratory. DeMott and Burrows are part of the larger community working to better understand how clouds form in order to improve computer models aimed at understanding and predicting the effects of climate change, so that we can anticipate and prepare for whatever environmental conditions lie ahead.

Clouds are an obvious element of climate, but their ongoing formation has been extremely difficult to capture in mathematical formulas. Calculations have relied on the principles of hydroscopy, which governs how water molecules are attracted and held in any given environment. If sea spray is treated as nothing more than salt and water, however, the result will not reflect what is actually happening in the sky.

“We are providing insights and information that can help modelers,” says Grassian, who published compelling findings on this topic in an article in the journal Chem last spring. Among the details that her team has revealed is that sea spray contains amounts of organic material — such as Grassian’s “bio bits” — that vary with the amount of phytoplankton and bacteria in the original seawater.

Just a few weeks after Grassian’s paper, Prather and colleagues published their own set of major insights in the Proceedings of the National Academy of Sciences. Their findings drew a distinction between two key mechanisms for forming sea spray drops that can result in distinctly different chemical compositions for the aerosols respectively produced by these drops. It had been assumed previously that aerosols only emerged from “film” drops, created when bubbles rupture at the ocean’s surface, but this paper points to “jet” drops that appear after film drops break. The latter contain a distinct mixture of salt, microbes and other organic material that also becomes part of aerosols.

At the same time, an international team of investigators revealed in Nature Communications their own analysis of sea spray, which confirmed that there is far less salt in these particles than had been assumed and so quite a different ability to attract water for aerosols. This observation built on earlier work by this same team that showed surprising concentrations of calcium in these particles, regardless of whether they had been collected in laboratory wave tanks or aboard vessels on the high seas.

Such reevaluations of the chemical makeup of spray particles is offering climate modelers a welcome set of physical relationships to incorporate into their work. Without this information, warns Grassian, they could well overestimate how much water is being incorporated in aerosols as well as the ability of those aerosols to form clouds.

She adds that future models could even take into account the possibility of clouds formed with dissolved organic matter that can absorb sunlight or perhaps even react with sunlight to generate entirely new compounds in the atmosphere. For modelers, it will mean an already dauntingly complex set of calculations will become even more so in order to respect these new physical and chemical insights, but the outcome should be all the more accurate.

“There’s a lot of interplay at that air-ocean interface,” Grassian concludes. “Gases and particles go in and come out of the ocean, so what’s in the ocean is going to affect what gets into the air and vice versa.”

The article was originally published in Enisa.