This monsoon was far from being ‘normal’

While rainfall over the entire country falls under the normal category, distribution of rain has been a far cry from IMD scientists' forecast

With the end of September, the monsoon in India also draws to a close. At the end of the four months, India received 841.3mm of rain, five per cent below the normal rainfall of 887.5mm. The monsoon partially vindicates India's met department that had predicted a "normal" monsoon (+20 per cent to –20 per cent departure from the average) during the two long forecasts it issued for the season. Of the 36 meteorological sub-divisions, six sub-divisions across seven states in Central and North India have ended the season with deficits of more than 20 per cent while five subdivisions in Southern, Western and Northeastern parts of the country received rainfall excesses of more than 20 per cent. Overall, around a third of the country received deficit rains by more than 20 per cent.

While rainfall over the entire country falls under the normal category, distribution of rain has been a far-cry from IMD scientists' forecast. Surprisingly, the arid regions in the West and the rain-shadow region of Tamil Nadu have received the highest excesses in rainfall. The worst hit by deficit rains are Uttar Pradesh, Madhya Pradesh and the drought-prone regions of Maharashtra. Eight of Vidarbha's 11 districts are reeling under deficits of more than 20 per cent. The stark nature of the distribution can easily be seen between Western and Eastern Rajasthan. While the arid zone has received rains far above normal, more than half of the districts in Eastern Rajasthan are in the red. 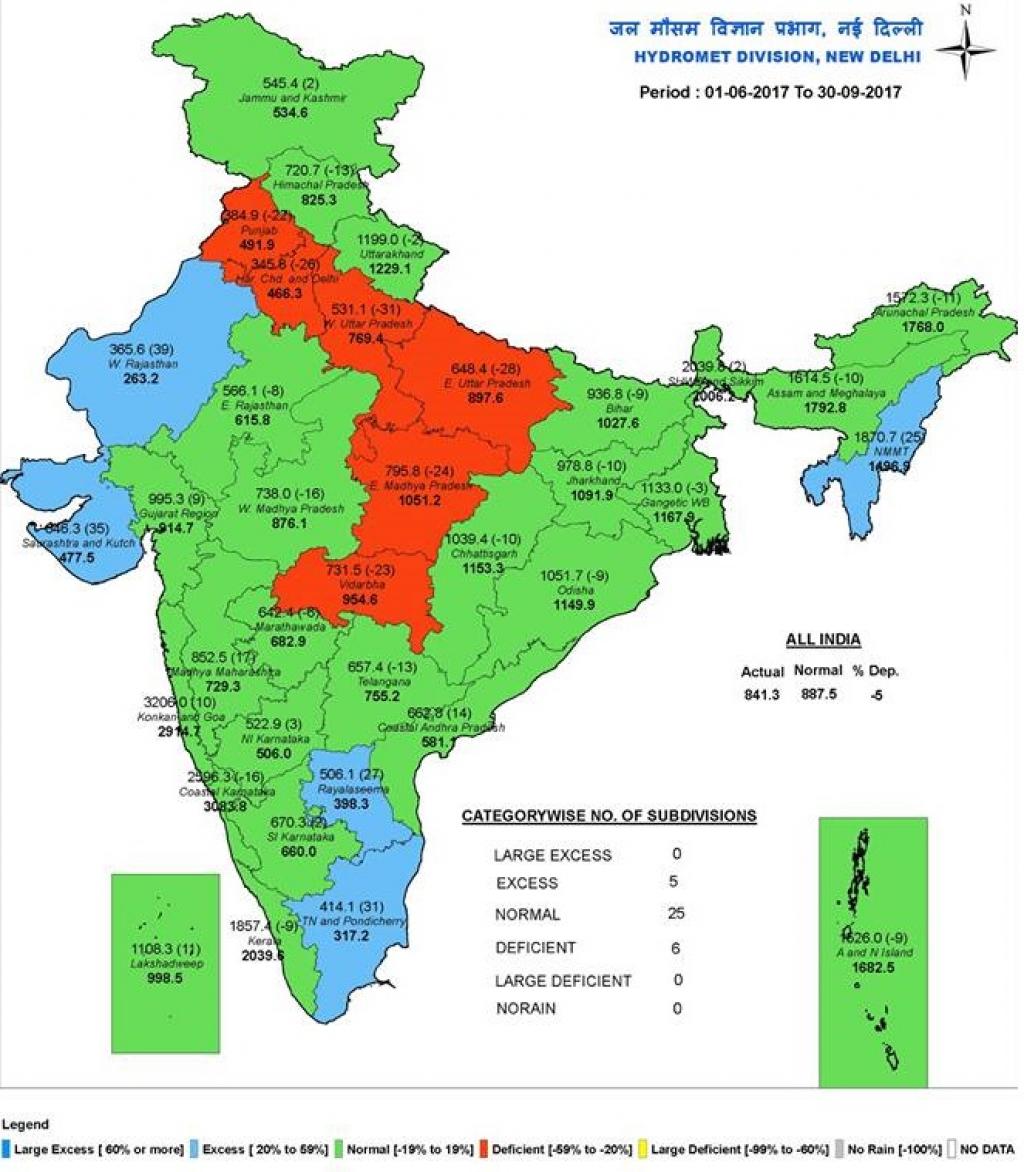 Time-wise too, a "new normal" was clearly evident. The monsoon never recovered from a stuttered start which saw progress stall for over 10 days of the western coast. A look at the week-by-week distribution chart of the season shows that the overall normal situation has been arrived more by large excesses cancelling out heavy deficits rather than a balanced or uniform distribution. Less than one-fifth of more than 12,000 weekly observations fall under the normal category. Across the country, weekly distribution shows extreme rain concentrated over a few days interspersed with long periods of heavy deficits. This is the same pattern broadly visible over all regions of the country (No data from some parts of Northeast India). The large number of floods reported from across the country is evidence to the same.

While the final numbers point to a normal monsoon this year, the poor timing could have a profound impact on agriculture. Losses were reported in the first-half of the season from Madhya Pradesh, Maharashtra and Karnataka. A combination of heavy deficits and poor timing of rains in northern India are bound to affect agricultural productivity this season. While drought-like conditions will likely be experienced in large parts of the country, it remains to be seen how many states declare drought with the enforcement of the new drought manual. Under the conditions set by the manual, states are entitled to central assistance for droughts only when they are deemed to be severely hit. The primary indicator is based on rainfall quantity but overlooks distribution—an equally critical factor for agricultural yields.

Although the season has officially ended, meteorologically, the monsoon is currently winding up. According to the IMD, the withdrawal has crossed the National Capital Region and is currently progressing over Uttarakhand, Western UP, Eastern Rajasthan and Gujarat. Some parts of the South and Northeast India are expected to receive some of the last showers of the current monsoon season over the coming days.