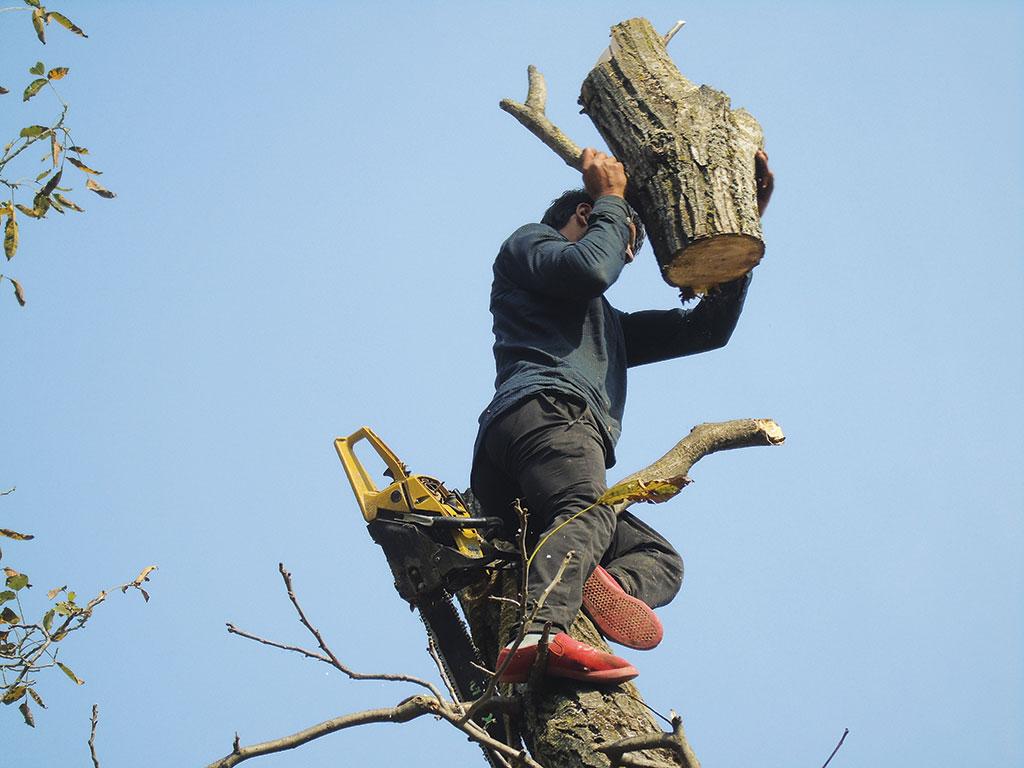 Walnut trees can pose threat to life and property. But in Kashmir permission to fell the tree is difficult to get. So during the recent blockade, most turned to the timber mafia to get those removed (Photographs: Khalid Fayaz)

An undeclared curfew continues to grip large parts of Kashmir since August, when the Centre abrogated Article 370 of the Constitution that gave Jammu and Kashmir a special status in terms of autonomy. Though post-paid mobile services were restored in mid-October, internet and text messaging remained suspended till the magazine went to print.

Most schools and colleges were closed and markets lacked their usual bustle. While the Army, police and administrative officials were busy maintaining law and order till the state was bifurcated into two Union Territories on October 31, some in the hinterlands took advantage of the 86 days of vacuum.

Construction activities picked up pace without paying any heed to legalities. In several districts, residents allege that builders encroached on land, particularly the greenbelt, where construction is prohibited. Hundreds of pine and cypress trees were felled in forests and smuggled out of the state by timber mafia. The most brazen act of illegality was that even residents started felling walnut trees in broad daylight, which is protected in the region.

Under the Jammu and Kashmir Preservation of Specified Trees Act, 1969, a walnut tree can neither be felled nor pruned, even if it stands on private land, without permission from the revenue department. It has got the special status mainly to protect the walnut economy. Kashmir accounts for over 90 per cent of India’s walnut production and is a major exporter of the nutritious nut. Its timber has a high demand in the state’s handicrafts industry, which is the second largest after fruits in the valley.

Yet people do not want the tree to grow too close to their properties. The trees can grow up to a height of 30 metres and have broad canopies reaching 18 metre width. “I have a walnut tree next to my house,” says Dilshada of Awantipora town. 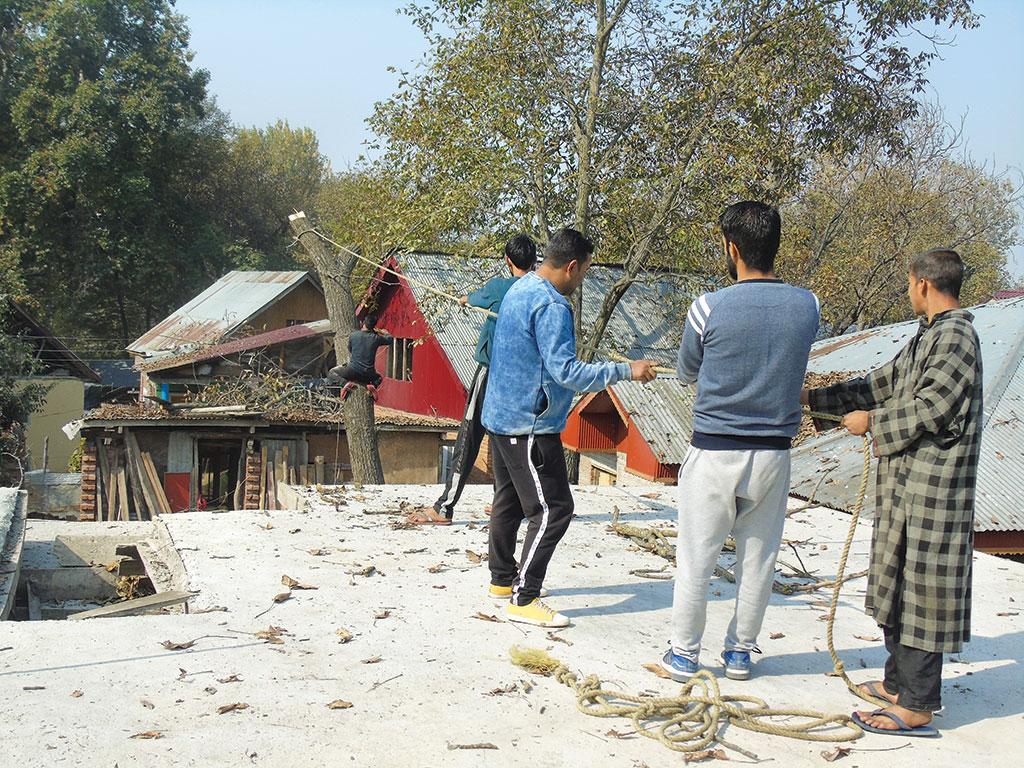 “Last winter, one of its branches fell on our car and damaged it. Since the tree is old, its branches could hardly bear the weight of snow,” he says, adding that such accidents are common across the valley.

“Yet we cannot get rid of the tree as the process of obtaining a felling order is cumbersome and time-consuming.” Shahbaz Ahmad (name changed) is another owner of walnut trees in Awantipora. He says a tree has grown so huge that its branches now hang over the house. He has frequented government offices for the past two years to get it removed, or, at least, pruned.

“I even bribed a few employees for getting the permission. But no one came for inspection and I did not get the felling order,” he says.

An additional deputy commissioner of Anantnag, explains why issuing a walnut tree felling order takes time. “We give permission only on the ground that a walnut tree poses a threat to life and property,” he says.

Then a spot inspection is conducted by the field agency which reports back to the tehsildar and chief horticulture officer of the district. If they find the request meritorious under the law, a report is sent to the divisional commissioner for approval. Copies of approved reports are then sent to the police officers and patwaris (land inspector) of the locality.

The rules require the tehsildar to be present on the spot at the time of felling, says the additional deputy commissioner, adding that not a single permission has been issued to fell walnut trees in last three months in Anantnag.

But Ahmad was gripped by the fear of an impending danger. So, soon after the imposition of curfew, when a kulbaaz (tree trader) approached him, Ahmad agreed to his offer and sold him all three walnut trees on his land instead of just the one posing danger to his house. “He offered Rs 3,000 a tree against the market rate of Rs 20,000. I accepted it as I did not want my children to run from pillar to post as well,” he says.

Ahmad says the kulbaaz left no evidence of the tree after felling it. He sheared off smaller branches and mixed those with the twigs of other trees used for making charcoal; sold the stem and bigger branches to the timber mafia; dug out the roots and stowed those away. Thanks to modern cutters, says Ahmad, the entire process took just five hours.

Experts explain why people in the valley loathe the tree despite the skyrocketing market price of its nut. “Planting walnut tree is an invitation to the government to visit your home and no one wants that,” says Rashid Latief, who works with the agriculture department in Kulgam district. A PhD student (name withheld) in Sopore district, explains why the tree does not make economic sense.

Nothing grows under it, not even grass. All parts of the plant exude the chemical juglone that inhibits the growth of other plants around it. This keeps 8 marleh, or over 200 sq m, of land barren. This much of land can be used to grow at least 10 high-yielding apple trees, she adds. 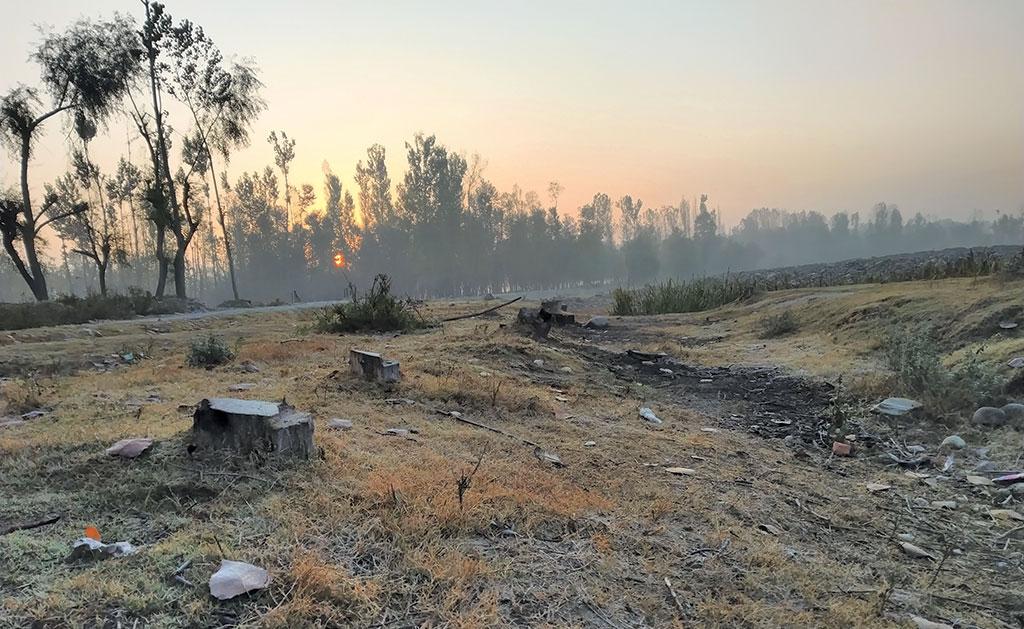 In Kulgam, a retired schoolteacher, says, “I hear the buzz of wood-cutting machines, excavators and tractors all night long. I want to blow the whistle, but the police shoot the messenger first. Some of them get a cut from the timber mafia.”

A local police officer rubbishes the claims, saying, “A few policemen might be hand-in-glove with the mafia. But whenever we discover such liaisons, we suspend the offending personnel.” The officer, however, admits that the curfew and shutdown have affected intelligence gathering, communication and movement of the administration, and “certain unscrupulous elements might be using the situation to their advantage”.

The future of walnut seems bleak in Kashmir, says a high-ranked official in Shopian district. “They are fast being replaced by apple orchards and buildings. Such illegality will continue unless high-yield- ing walnut breeds are promoted and laws are made people-friendly.”

Down To Earth met a kulbaaz in Anantnag who explained how local people are eager to violate the laws that they feel are not beneficial to them. “The valley was under a similar prolonged curfew and communication blockade in 2016 following the killing of Kashmiri militant Burhan Wani. In a village, I felled 17 walnut trees in a single day to make space for a graveyard. Hundreds of people helped me get the area cleared,” he says.

On being asked if things will be different now, he says, “Who will maintain the law if people are determined to break it?”