Fight for water ends in murders 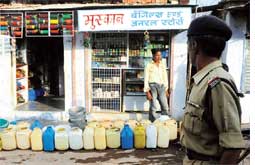 THE beat police in a slum colony of Bhopal's Shahjehanabad area have an unusual duty these days. They patrol the streets of Sanjay Nagar Basti when its residents receive their one-hour supply of water on alternate evenings. Their presence became necessary after a goon and his accomplices killed three members of a family over a water dispute on May 13.

Dinu and his accomplices repeatedly stabbed their neighbours, Jeevan Malviya, 42, construction worker, his wife Savita and their 19-year-old son Raju. Dinu wanted his family to have the first right to fill water from the sole water supply point in the colony. Before the murders, the colony received water for 15 minutes on alternate days.

Sanjay Nagar does not have a regular supply of municipal water, so the residents have dug a pit in the middle of the street to reach the underground municipal pipe passing through the colony.They have bored a hole in the pipe and illegally draw water by inserting rubber tubes. The Malviyas' home is right in front of this water source where the basti collects to fill water. Savita was usually the first to fill water and this became a matter of dispute between her and Dinu's wife, Rekha, who lives a few houses away.

"Rekha quarrelled with mummy in the morning about who would fill water first," recalled Uma, 15-year-old daughter of the Malviyas. There had been no water supply the previous three days, so the residents were impatient that evening. They kept peeping into the pit every few minutes. At about 8 pm when the pipe started gushing water, the slum was abuzz with the news "pani aa gaya (water has come)". The 200-odd residents of the basti jostled and shoved, cans, buckets and rubber tubes in hand. Savita was the first to get there. Dinu accosted Savita and started slapping her and said his wife and family would have the first right to fill water from the pipe, said the neighbours. Savita, who was joined by her husband, started quarrelling with Dinu who was joined by six other men armed with knives and lathis. After a few minutes of verbal abuses and fist-fighting, the men whipped out knives. They repeatedly stabbed the couple and their son Raju who intervened. They stamped on their necks to suffocate them, said eye-witnesses. Jeevan's neighbour Sunil was also stabbed by Dinu. He survived.

Amid the fight, Uma said, most residents continued to fill water, after which they bolted themselves inside their houses. Uma's parents and brother lay bleeding and groaning for an hour before the police arrived and took them to the hospital. Uma, her two younger sisters and a brother too stayed indoors with grandparents. Jeevan, his wife and son were declared dead at the hospital.

Sunil who survived the wounds said people were too scared to face up to Dinu and his gang as they threatened to kill anyone who reported him or his family to the police. "All the six men, including Dinu, were arrested but sent me messages that I should change my statement to the police," said Sunil who now fears for himself and his family.

The orphaned Malviya children have no means to earn a living. The government has promised them a compensation of Rs 10,000 per child. "I waited at the offices of the sub-divisional magistrate and the additional divisional magistrate to ask about the compensation, but couldn't meet the officers," said Uma. She is looking for work as domestic help. Area Congress legislator Arif Aqueel said he would propose Rs 10 lakh compensation for the family when the Vidhan Sabha session begins. Aqueel said tankers are supplying water to the colony.

Uma and her siblings were composed when they narrated how their parents died. Their immediate worry is their own survival and arranging drinking water for the family. Police presence has ensured people remain in queue and follow order while filling water.